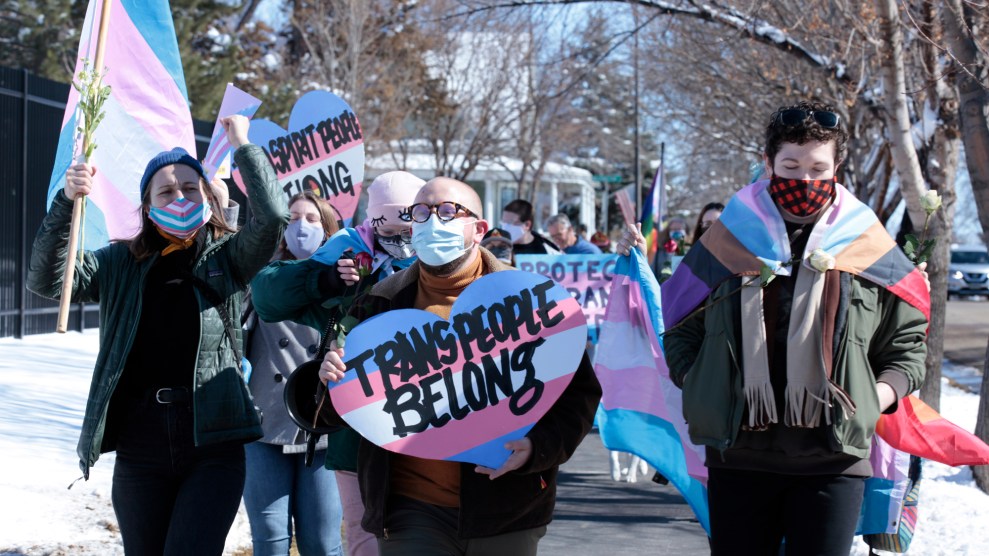 On Monday, the NCAA made its most definitive statement yet regarding transgender athletes and the flurry of state-level bills seeking to ban them from organized sports. The association’s Board of Governors reiterated their “unequivocal” support for trans athletes. Taking a further step, the board even suggested that championship play would only happen in cities and states that are “free from discrimination.” It isn’t the NCAA pulling out of states with anti-trans bills yet. But it’s a signal they might.

“The NCAA has a long-standing policy that provides a more inclusive path for transgender participation in college sports,” the statement says. They point out that their approach—since 2010 they’ve allowed trans women to compete as long as they’re taking testosterone suppressing drugs—is in line with both the international and U.S. Olympic committees’ regulations. “Our clear expectation as the Association’s top governing body is that all student-athletes will be treated with dignity and respect.”

Arkansas, Mississippi, and Tennessee have all passed bills in recent weeks that would prohibit trans athletes from competing in women’s divisions. At least 20 other states are still considering similar legislation, including West Virginia, where an anti-trans sports bill is currently awaiting the governor’s signature. In South Dakota, Gov. Kristi Noem vetoed a similar bill—thanks at least in part to pressure from the NCAA—only to issue a series of executive orders that, in essence, do the exact same thing, but don’t explicitly reference transgender people. The bills are the latest iteration of the right’s moral panic over LGBTQ rights, complete with the (patronizing) claim that cisgender women need to be “protected” from their transgender peers.

The NCAA has become one of the more vocal opponents of trans-exclusionary politics, dating back to a high profile boycott of North Carolina after the state passed its controversial “bathroom bill” in 2016. The bill likely cost the state billions in lost revenue thanks to business boycotts, including the NCAA. Nonetheless, the Association has also been criticized for its poor treatment of women athletes and belated response to the anti-trans bills. More than 500 NCAA athletes signed a letter to the NCAA president and Board of Governors earlier this year, calling out their silence on the issue.

“The harm these bills will cause will be felt by generations of athletes to come,” they wrote. “Trans youth will not be able to play and excel at the sports they love, causing a ripple effect that will eventually remove an integral element of the diversity of college sport. Failure to speak up now will harm current and future athletes—perhaps irreparably.”