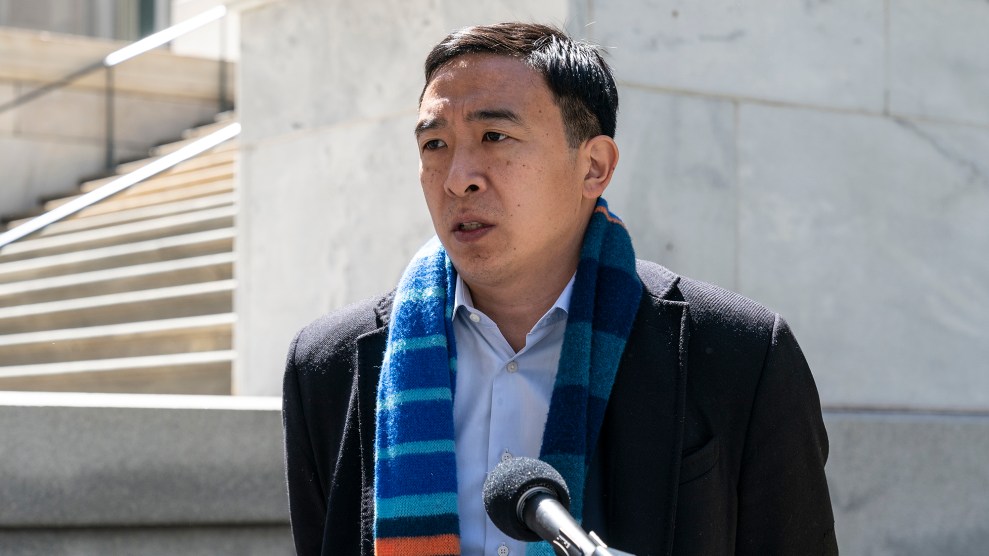 A new ad supporting former Democratic presidential candidate Andrew Yang in the New York City mayoral race comes with an interesting disclosure at the end: The top three spenders responsible for the ad are all Republican megadonors.

GOP support for Yang, who is running in the city’s Democratic primary, is showing up in donations to super PACs, which can accept unlimited amounts of cash. Jeff Yass, a libertarian billionaire and longtime supporter of Sen. Rand Paul (R-KY), is the first name listed on the pro-Yang ad from a super PAC called Comeback PAC. “Andrew has a lot of libertarian leanings,” Yass—who has bankrolled numerous Republicans—told Politico recently. “He is not quite a libertarian, to say the least, but he has those leanings.”

As I wrote earlier this week, Yang is viewed suspiciously by many New York progressives, who see him as a corporate-style Democrat with libertarian tendencies. Yang’s centrist leanings are most apparent in his views on business and economics, and his campaign is being guided by a consulting and lobbying firm that has run campaigns to stop tax hikes on the wealthy.

Two other major GOP donors round out the list on the super PAC’s ad disclosure. Kenneth Griffin has spent millions in recent years to elect national Republicans. Daniel Loeb has supported Republicans, as well as New York Gov. Andrew Cuomo, a moderate Democrat.

Griffin and Loeb, both hedge fund managers, have hedged their bets in the mayor’s race by also donating a combined $2 million to a super PAC supporting Eric Adams, another moderate candidate who recently overtook Yang in some polls.

These three aren’t the only big-money donors jumping into the Democratic primary. Republican donor and oil magnate John Hess has donated $1 million to support Ray McGuire, a Wall Street executive who is seen as another centrist in the field. George Soros dropped $500,000 to support progressive Maya Wiley. And unions have likewise opened their pocketbooks to support progressives who are currently trailing Yang and Adams. Shaun Donovan, former HUD secretary under President Barack Obama, has benefited from nearly $7 million in outside spending from his father, Michael Donovan.