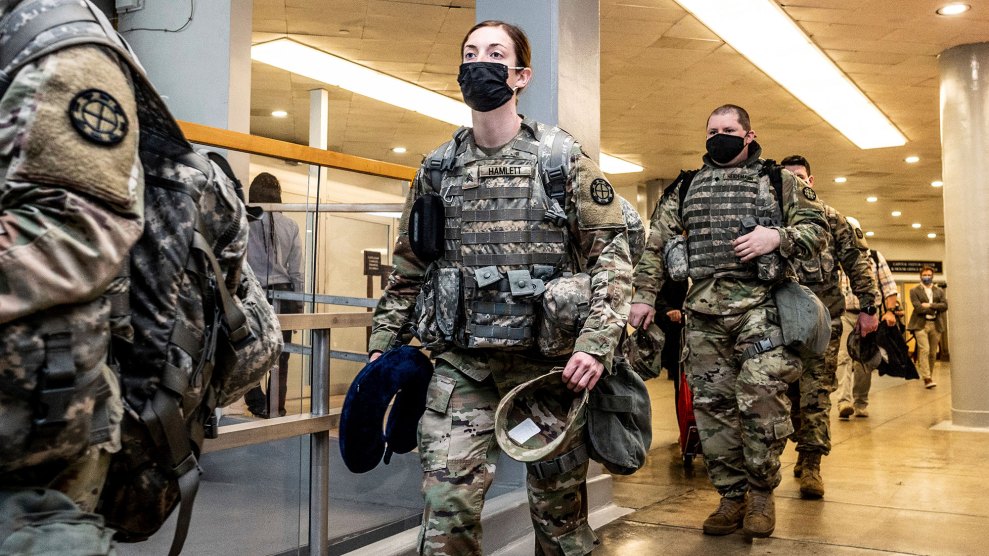 National Guard troops walking in the US Capitol in April.Michael Brochstein/Sipa USA via AP Images

More than 2,000 National Guard troops are packing up and leaving the Capitol Sunday, more than four months after a mob of angry Trump supporters stormed the building in a deadly attack on January 6.

Retired Lt. Gen. Russel Honoré, who led a review of US capitol security following the riot, said Sunday on CBS’s Face the Nation that while the grounds around the Capitol will no longer have National Guard troops, there will continue to be restrictions to movement in the area as Capitol Police resources remain strained. When Honoré was asked if this was the right time to send the troops home, he responded: “Well I’ll tell you what, if it’s not, they’ve hit that magic date and they’re going home.” He added, “The Capitol is secure, based on the mission that the Capitol Police have now, which is secure the Capitol.”

Reuters reports that at one point, there were about 5,200 National Guard troops at the Capitol, and their time there had already been extended once, from March to May 23. Since that extension, the Department of Defense reportedly did not request for the National Guard to continue its mission at the Capitol.

The troops’ departure comes as Congress decides whether or not to establish a 9/11-style commission to investigate the insurrection. Earlier this week, despite opposition from House Minority Leader Kevin McCarthy (R-Calif.), 35 Republicans joined all House Democrats and voted for the measure. As my colleague Abigail Weinberg reports:

The fate of the bill in the Senate, where it needs 10 Republican supporters to pass, is unclear. Senate Minority Leader Mitch McConnell (R-Ky.) has said he would vote against the bill, but the substantial number of Republicans who sided with Democrats in the House suggests that perhaps a few Senate Republicans may be willing to break ranks.

Still, the many Republicans’ unwillingness to open a probe into the events of January 6 has exasperated some Democrats. During a debate on the House floor this afternoon, Rep. Tim Ryan (D-Ohio) lost his temper with his colleagues across the aisle. “We had people scaling the Capitol, hitting the Capitol Police with lead pipes across the head, and we can’t get bipartisanship,” he said, adding that ignoring January 6 was “a slap in the face to every rank-and-file cop in the United States.”

While the GOP would like to forget the attack on January 6 ever happened, the Department of Justice is moving forward with its massive investigation into the insurrectionists. My colleagues at Mother Jones have assembled and analyzed a database of more than 450 defendants charged to date and found that “at least 81 people are accused of assaulting police at the Capitol that day. The defendants allegedly used an array of weapons, from flag poles and fire extinguishers to their own fists. Many of the attacks were captured in video footage that circulated widely on social media.”

This, of course, is in line another comment from Honoré on Sunday, reflecting on the “dangerous, violent mob” that came to the Capitol that day:

Some GOP lawmakers have sought to downplay the severity of January 6 in the months since the attack.

Lt. Gen. Russel Honoré (Ret.) says there should be no mistaking what Capitol Police faced that day: a “dangerous, violent mob that fought them — tried to kill them.” pic.twitter.com/XCdcMzfLWh