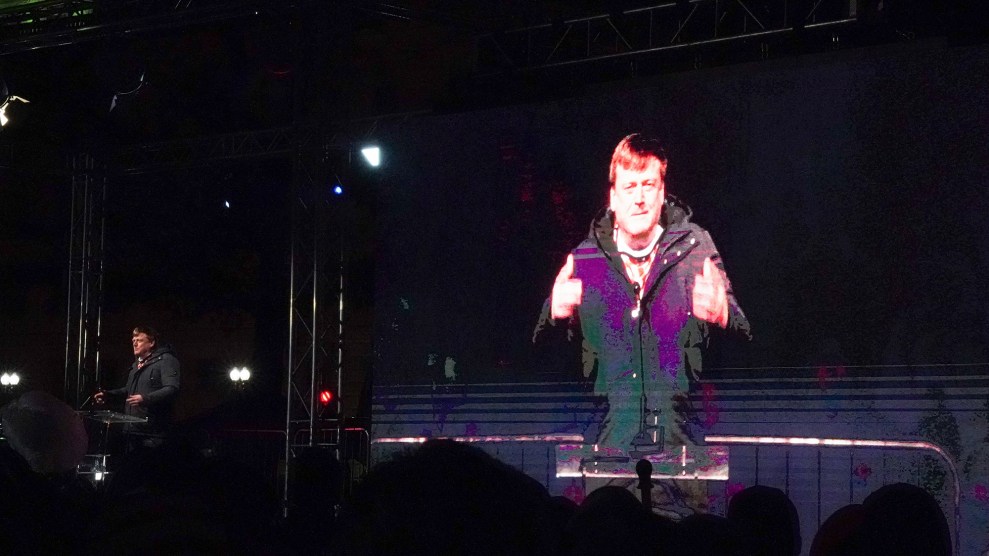 Patrick Byrne speaks at a Washington rally of Trump supporters the night of January 5, 2021.Bryan Smith/Zuma

Dominion, the voting equipment vendor at the heart of some of the most sensational and debunked conspiracies holding that the 2020 was stolen from former President Donald Trump, filed a trio of defamation lawsuits Tuesday targeting two conservative media outlets and Patrick Byrne, the former CEO of Overstock.com.

The suits bring the total number of suits filed by Dominion Voting Systems against prominent propagators of such conspiracies to seven, according to the Wall Street Journal: It had already sued Fox News, former Trump attorney Rudy Giuliani, Mike Lindell, and former Trump attorney Sidney Powell.

Byrne has established himself as one of driving forces of misinformation and disinformation about the 2020 election, pouring his money into the effort. The America Project, his nonprofit, reportedly provided $3.25 million to the organization behind the “audit” in Maricopa County, Arizona, and has produced a book and a movie, The Deep Rig, laying out his case. Dominion’s lawyers also allege that Byrne provided a private jet to a team that traveled to Michigan to produce a widely debunked and error-ridden report on alleged election rigging in that state.

The suit against Byrne alleges that he decided months before the 2020 election that it would be stolen and, after the election, “manufactured and promoted fake evidence to convince the world…of a massive international conspiracy among China, Venezuelan and Spanish companies, the Department of Justice, the Department of Homeland Security, the Federal Bureau of Investigation, prominent Republicans, Chief Justice John Roberts, and Dominion.”

When it comes to Byrne’s motivations, Dominion’s lawsuit focuses on how he could gain financially by attacking their company. Byrne has reportedly invested more than $200 million in blockchain technology, including, Dominion’s lawyers allege, with companies looking to profit from promoting its use in smartphone voting.

The company’s suits seek $1.6 billion in damages from all three parties, plus additional money to pay for security and “expenses incurred combatting the disinformation campaign.”

“Between the imminent release of the Maricopa Audit, and Mike Lindell’s current activities in South Dakota, Dominion Voting is about to have a very difficult week,” Byrne told Mother Jones in response to a request for comment on the lawsuit. “They are simply doing this as a distraction.”

The suits were filed the same day that Lindell—whose company MyPillow Inc. has counter-sued Dominion—planned to launch his so-called “Cyber Symposium.” The online event was organized by Lindell and other conspiracists who say they can prove Trump’s election victory was stolen as part of the kind of sprawling international conspiracy that Byrne has helped propagate. The event was apparently delayed due to technical glitches. Lindell blamed them on an “attack” from unnamed forces.