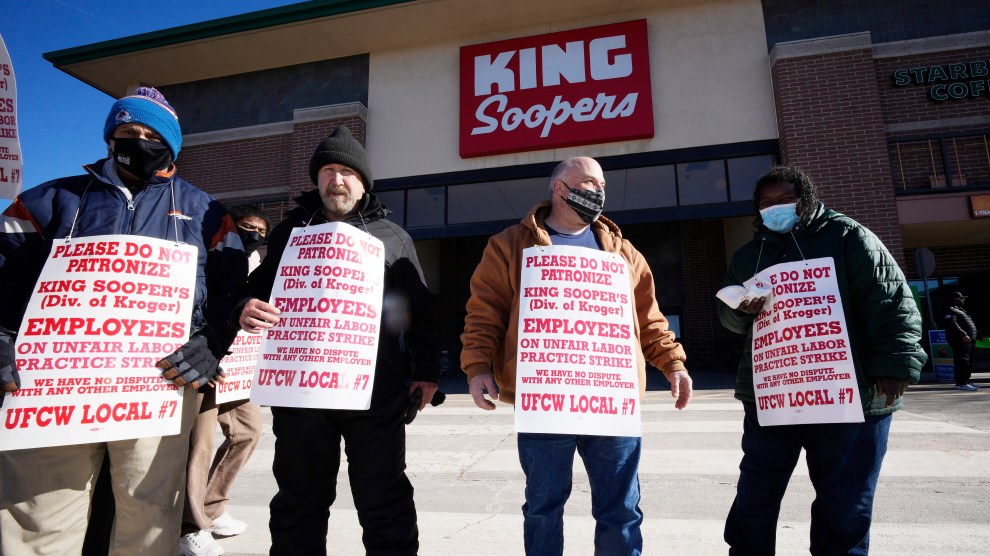 The strikers, who picketed outside nearly 80 Kroger-owned King Soopers locations in and around the Denver area, were demanding higher pay and better benefits. While the details of the agreement have not yet been made public, the union president, Kim Cordova, says that it “ensures that our members will receive the respect, pay and protection they warrant.”

The strike had been ongoing since January 12, after a near-unanimous vote early in the new year to authorize it. The union members, many of whom are food insecure, demanded $6-an-hour raises for workers at every wage rate. In previous negotiations, the supermarket said it has offered “up to” $4.50-an-hour raises. Union representatives told Dave Jamieson, HuffPost’s labor reporter, that that number was misleading, and that most workers would receive raises of $1.50 or less. The company had touted its offer of a $16-an-hour wage floor, but the union pointed out that that’s just 13 cents above the $15.87 minimum wage in Denver.

Until the agreement, the fight was contentious. Earlier this month, the union filed an unfair labor practices lawsuit against the company for allegedly hiring temporary workers at a higher wage than union employees, in violation of the collective bargaining contract. It gets messier: King Soopers filed its own unfair labor practices lawsuit against the union, arguing that it refused to bargain in good faith when it rejected the supermarket’s request for intervention from a federal mediator. Then, after the union went on strike, King Soopers accused strikers of intimidating people attempting to cross the picket line, leading a judge to grant a temporary restraining order limiting the number of picketers who can demonstrate in front of a store at a given time.

Kroger’s profits have soared during the pandemic, nearing $2.6 billion in 2020, but, according to strikers, the money hasn’t trickled down to employees. (King Soopers accounts for about five percent of Kroger’s sales.) The strike attracted the support of politicians like Sens. Bernie Sanders (I-Vt.) and Elizabeth Warren (D-Mass.), who have made local fights over union power part of a larger political campaign to push national companies like Kroger to treat their workers better.

The strike has been effective. For the past 10 days, King Soopers parking lots have sat empty, and rival supermarkets have seen long lines and bare shelves thanks to increased demand from former King Soopers shoppers choosing not to cross the picket line.

The King Soopers strike is already having an effect.@Denver_PSL recorded empty shelves and registers at one store on day 3 of the strike.

Over 8400 King Soopers workers are now on day 7 of their strike for livable wages and better working conditions. pic.twitter.com/px1IY1DQ9k

The strike had the support of many Denverites, including the mayor—but you wouldn’t know it to look at local news coverage. CBS Denver reported that union members were getting paid to strike, as if this were news: Strike pay is a standard part of many union contracts to ensure that workers can afford to participate, and the money comes from their own union dues. Meanwhile, KDVR, the local Fox affiliate, routinely acted as a mouthpiece for King Soopers.

Union members will start to return to work as soon as Friday, with votes on the deal starting next week.