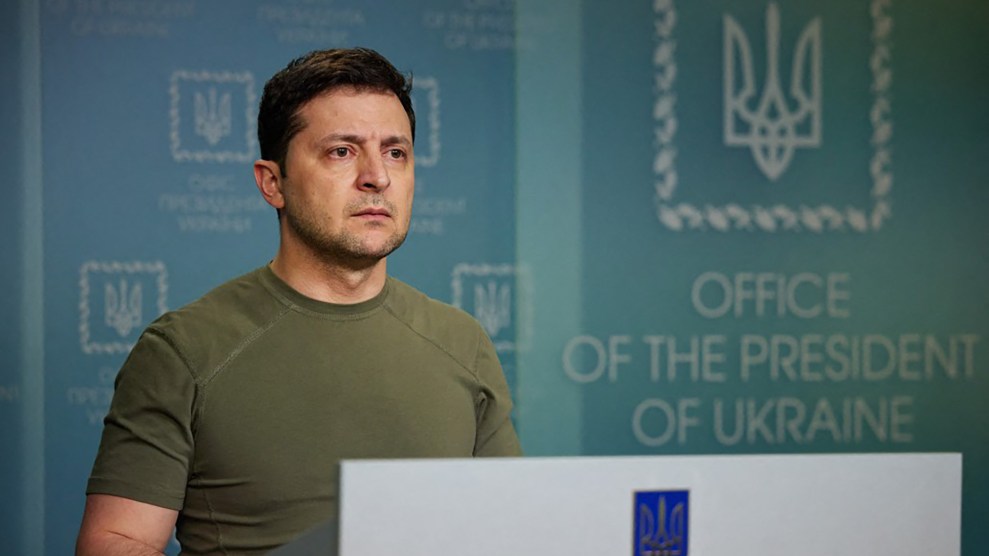 Ukranian President Volodymyr Zelensky speaks on February 25 in Kyiv, the first day of Russia's invasion of Ukraine. Abaca via ZUMA

After a night of fighting in Kyiv, Ukrainian President Volodymyr Zelenskyy posted a video Saturday morning reassuring the besieged nation that Russia has not taken the capital yet. “We are going to defend our nation. Because our weapons are our truth,” Zelenskyy says in the video, as he stands in front of the official presidential residence. “That’s our truth because this is our land, our country, our children. And we will defend all this.”

A former comedian who once played the president on television, Zelenskyy has deftly used his communication skills and social media savvy to rally Ukrainians while also battling Russian disinformation for an international audience. No other country has joined the war in Ukraine’s defense, but the Russian invasion on Thursday morning following weeks of saber-rattling has resulted in nearly universal international censure, as well as increased economic sanctions on Russia. Foreign aid is critical to Ukraine. President Joe Biden is working with Congress to secure an additional $6.4 billion in aid for Ukraine.

On Friday, Zelenskyy confronted Russian rumors that he had fled Kyiv by posting a video of himself in front of the presidential building. “We are here,” he said, appearing to hold the camera himself, surrounded by top advisers. “We are in Kyiv. We are protecting Ukraine.”

⚡️Ukraine’s Zelensky posts a new video of himself and his team outside the presidential administration in Kyiv’s government quarter after rumors in Russian media that he’d fled. “We are here. We are in Kyiv. We are defending Ukraine.” pic.twitter.com/bgHyrsbVFs

On February 24, on the eve of the invasion, Zelenskyy, wearing a somber suit and speaking in Russian, addressed the Russian people directly in a formal speech he hoped would break through Russia’s censored media ecosystem and reach ordinary citizens across the border. In the moving speech, he pled with the Russian people to stand up against their country’s push for war. Of course, his eloquence and impressive messaging skills also reached a wider international audience.

Within a matter of days, Zelenskyy has traded in his business suit and is now seen wearing military gear. His videos have clearly not stopped a war that Russian President Vladimir Putin is intent on waging—with Zelenskyy himself reportedly as the Russian leader’s top target—but they are also helping to maintain formidable Ukrainian resistance and galvanize public opinion. Ukraine has handed out tens of thousands of weapons to its citizens in order to fight Russian troops, and its radio has broadcasted instructions for making Molotov cocktails. As of Saturday, Kyiv remained under Ukrainian control. Zelenskyy said in a televised address that the country is “successfully repelling” Russia’s attacks on the city.