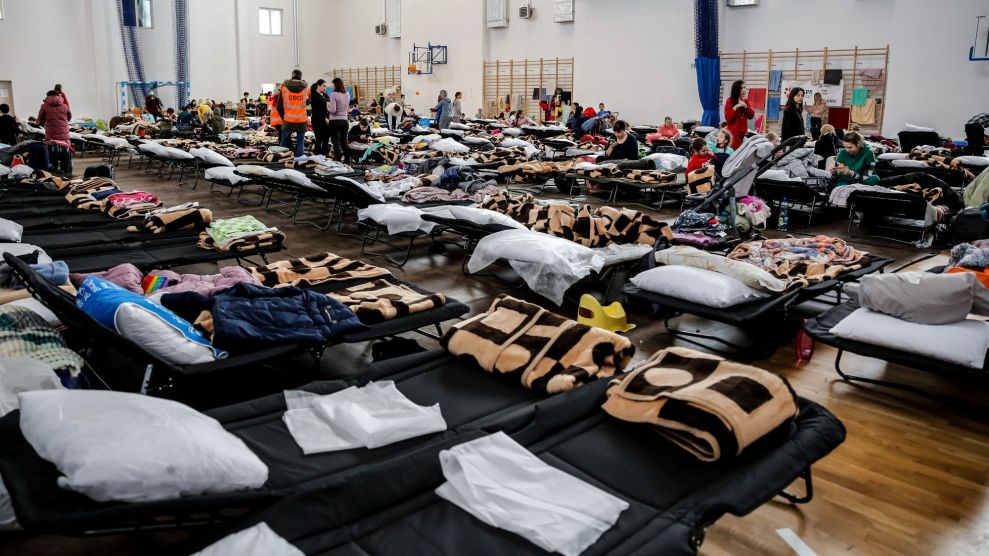 Ukrainians and other war escapees rest in a school sports hall temporary transformed into a shelter due to the Russian invasion of Ukraine. Dominika Zarzycka/AP

It’s only been a week since Russian tanks and soldiers poured across the border into Ukraine, but the conflict has already seen 1 million refugees flee Ukraine, the United Nations refugee agency said.

“I have worked in refugee emergencies for almost 40 years, and rarely have I seen an exodus as rapid as this one,” UN High Commissioner Filippo Grandi wrote in a statement. “Unless there is an immediate end to the conflict, millions more are likely to be forced to flee Ukraine.”

If the count from the UN High Commissioner for Refugees is accurate, that would be more than 2 percent of Ukraine’s population, and the agency only expects the number to swell as the ferocity of the conflict continues to escalate. The UNHCR estimates that more than 117,000 people have fled the country per day from the second day of the invasion onward. By comparison, the height of the Syrian civil war took about a month to produce 1 million refugees, with the total number eventually reaching a record 5.7 million.

According to the UNHCR, more than half of the refugees have fled into Poland, with Hungary so far having accepted the second-largest number of Ukrainians during the conflict. These numbers are striking. Both the Polish and Hungarian governments have in recent years demonized refugees and adopted policies explicitly designed to punish migrants.

Shortly after the Russian invasion, Hungarian Prime Minister Viktor Orban, who has previously faced international condemnation for spearheading legislation hostile to migrants, seemed to soften his hardline anti-immigrant position, saying in a statement that his country was “prepared to take care of” Ukrainians.

Polish citizens have likewise rallied to feed and house Ukrainians who have streamed across the border over the last week—a sharp contrast to 2021 when Polish border guards beat predominantly Syrian and Iraqi refugees that Belarusian President Alexander Lukashenko had expelled from his country, a dozen of whom eventually died in the forests crisscrossing the Poland-Belarus border.

Grandi praised the “heartwarming” international response and the willingness of neighbor states to harbor those fleeing the conflict. But he also added that the only solution to the growing crisis was an immediate ceasefire.

“But nothing—nothing—can replace the need for the guns to be silenced; for dialogue and diplomacy to succeed. Peace is the only way to halt this tragedy.”