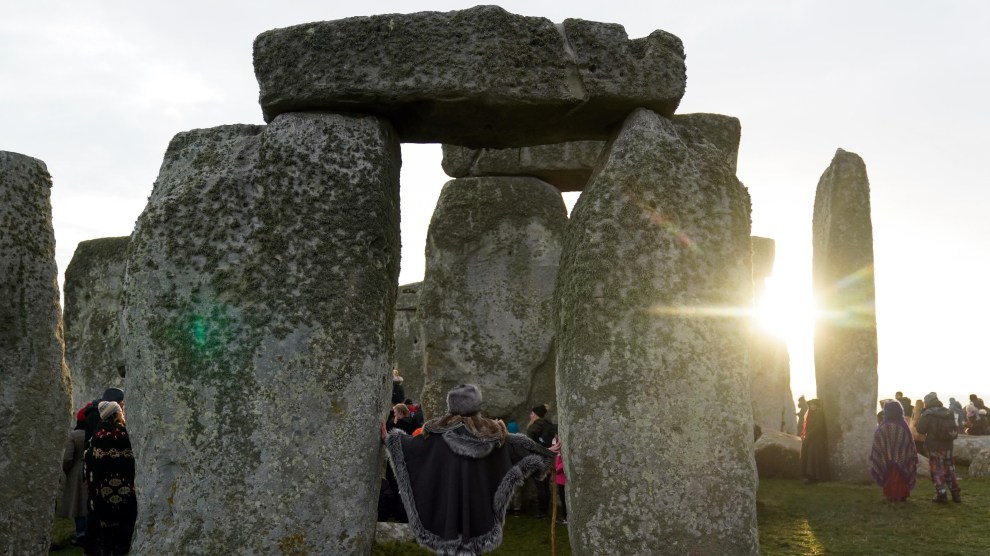 I feel like the prehistoric sun-worshippers would be with me on this one.Andrew Matthews/PA Wire/Zuma

There’s one thing we should all agree on: Early sunsets in the winter are terrible.

The sun simply should not set at 4:30 p.m., before the average 9-to-5 worker leaves the office. No sunsets before 5 p.m., period. For the love of God, end our winter misery and give us those glorious afternoon sun rays.

Literally everyone in the Senate agrees with me. This afternoon, the upper chamber of our esteemed government passed, by unanimous consent, a measure to make Daylight Saving Time permanent year round. The Sunshine Protection Act promises that you’ll never have to adjust your clock again. It will also mean more afternoon light in the winter—plus fewer transition-related heart attacks and strokes.

Daylight Saving Time was first proposed by Benjamin Franklin as a way to conserve candles in the summer. (I’m partial to old Ben—he became my hometown’s namesake when he refused to buy the townspeople the church bell they wanted and, “sense being preferable to sound,” gave them a bunch of books instead.) DST was observed in the US in the summer to conserve energy during the world wars, but our annual practice of springing forward and falling back wasn’t permanently established until the Uniform Time Act of 1966. Now, after more than five decades, is finally the time to agree to bring that glorious after-work sunlight into the winter months.

Still, the support of senators from all 50 states apparently isn’t enough for a lot of people. Some say that winter sucks no matter how the clocks are set. I can’t argue with that.

But then there are the contrarians who think changing the clocks is a good thing. The most prominent is probably Josh Barro, who has written about our experiment with year-round DST in 1974 and concluded that “people hated it.” Who knows? Maybe people were opposed because it was a Nixon policy. It was the ’70s. They didn’t know any better. (We also have tools in 2022 that we lacked 50 years ago—namely, computers. One in four Americans works from home full time. Those dark mornings will be a lot easier to handle in your PJs.)

Another argument against DST is that it will make religious practices like Jews’ sunrise prayers less convenient. Jews also have a pretty famous religious practice observed before sunset on Fridays, and year-round DST would remove the burden of them having to rush home from work in the winter. You take what you can get. Another solution that doesn’t involve not seeing the sun for months? Flexible work hours and expanded work-from-home options for people whose professions permit it.

The most annoying argument I saw is that kids will have to walk to school in the dark in the winter. I present to you myself waiting for the school bus in the dark at 6:58 a.m. in 2013.

Waiting for the school bus and the sun hasn't risen yet pic.twitter.com/EyiyiBmUvu

Not only do many kids already do this (see: me), but there’s a simple solution that would be much less disruptive to parents than two years of at-home schooling: start the school day an hour later. Kids need the extra sleep, anyway.

Finally, my editor, an absolute fool, has one more argument against year-round DST. He masochistically enjoys waking up early to run before work. He thinks that post-work activities—like drinking in a bar—are best enjoyed after sundown.

I run after work, because I’m a normal human being. And I won’t dignify his anti-daylight-drinking stance with a response.

So, kvetch all you want. If Congress can make it happen, I’ll enjoy it while it lasts.