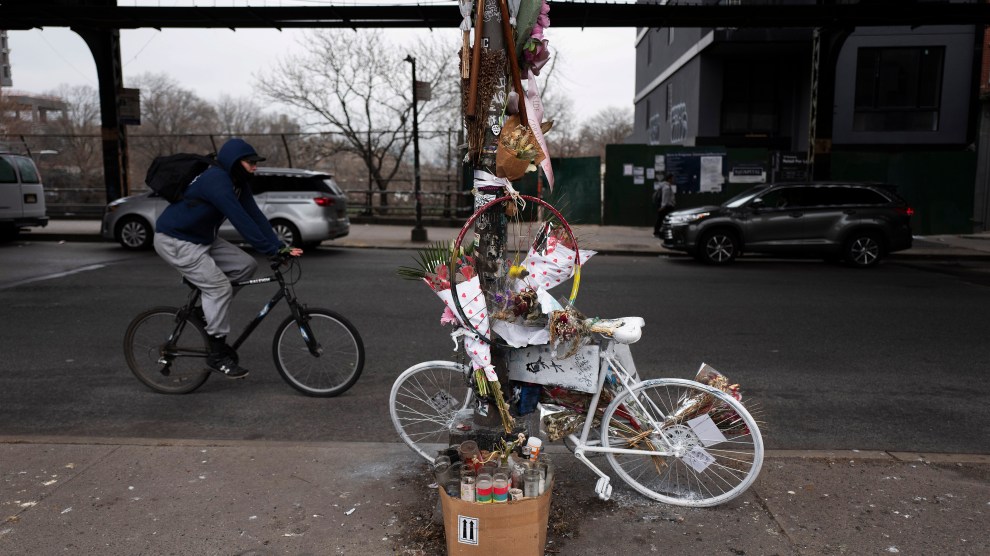 A "ghost bike" in Brooklyn, New York, marks the spot where a cyclist was killed.Mark Lennihan/AP

Last week, Michael Weilert, a 13-year-old boy on a bicycle in Parkland, Washington, pressed a button to activate a blinking pedestrian signal, entered the crosswalk, and never made it to the other side of the street.

Weilert had the right of way, but one of the crosswalk lights was broken. A driver failed to yield, despite another car stopping at the intersection. The car struck Weilert, killing him.

Still, officials implied that the victim was responsible. “He all of the sudden appeared in front of her car,” Trooper Robert Reyer of the Washington State Patrol told the News Tribune, “and she [the driver] was unable to stop.”

Even though the driver failed to yield, she was not ticketed or charged, though the county prosecuting attorney could still press charges in the future. “Charges would only be forwarded if there was a criminal offense, such as being impaired and killing somebody, or driving in a manner that is, basically, reckless,” Reyer said. “We could completely exclude both. There was no impairment, and there was no reckless driving.”

As Weilert’s mother has pointed out, failure to yield is, by definition, reckless. She also noted that another driver had already stopped to allow her son to cross. “I can’t imagine knowing that someone is stopped—any car is stopped—at a crosswalk and you wouldn’t stop too. Just that behavior alone…is reckless,” she told local TV station KIRO 7. Now, she’s calling on the state to pass a law requiring crosswalk signs to flash red, so drivers know they need to stop.

Reyer’s comments—and the lack of repercussions for the driver—are part of a larger infrastructure designed to allow cars to control the roads, even if it means imperiling pedestrians, cyclists, and wheelchair users.

Seattle Bike Blog points out an effective way to reduce cars’ dominance: Eliminate community roads with multiple lanes of traffic. “Traffic engineers across the world have found that one lane in each direction with turns lanes where appropriate can carry a large number of vehicles per day far more safely,” Tom Fucoloro writes. Traffic engineers already know how to design roads to save lives. They just have to implement those changes.

On the other side of the country, in Durham, North Carolina, Matt Simpson, a 40-year-old father, was killed in a crosswalk in awfully similar circumstances earlier this month. He was crossing the street—two lanes in either direction—on his bike, with his wife and two children in tow. He had the right of way, too. A driver ran the red light, struck Simpson, and left the scene of the crash. While authorities search for the suspect, safe streets advocates are calling for protected bike lanes and narrower roads that would encourage drivers to reduce speed.