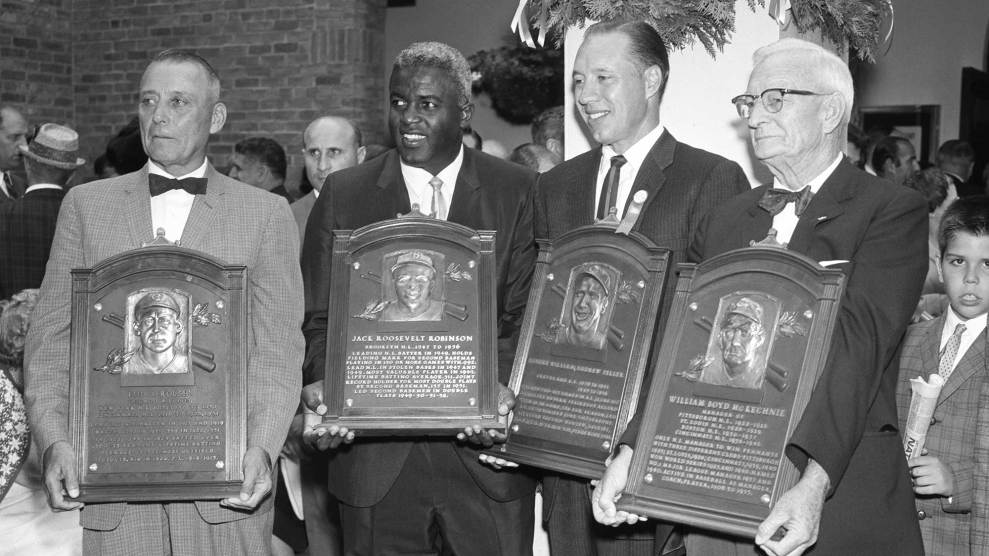 “I want to thank all of the people throughout this country who were just so wonderful during those trying days,” he added. “I appreciate it at no end. It’s the greatest honor any person could have and I only hope that I’ll be able to live up to this tremendously fine honor.”

Robinson’s impressive play on the field speaks for itself: He was the National League’s most valuable player in 1949, and he helped lead the Dodgers to the World Series title in 1955. But he did that in the face of at-times viciously racist taunts from opposing players and fans who deeply wanted baseball’s first Black player in the modern era to fail, and to fail publicly.

As Robinson wrote in Jackie Robinson: My Own Story, published in 1948, Rachel Robinson had warned him about his temper heading into that first spring training in 1947. “Because I was a Negro, I knew I had to remain calm all the time,” he wrote. “My wife also knew it, and she kept drilling the admonition into my mind. I guess she half-believed I was hot-headed, because she had been present several times when I had encountered discrimination and had seen me get so angry that I had almost blown up.”

Robinson went on to describe what he calls “the first racial ‘incident,'” in a three-game series against the Philadelphia Phillies in Brooklyn that April:

The Phillies, led by their very able manager, Ben Chapman, are great bench-riders. The first time I stepped up to the plate, they opened up full blast. “Hey, you black Nigger,” I heard one of them yell. “Why don’t you go back where you came from?” Then I heard another one shout: “Yeah, pretty soon you’ll want to eat and sleep with white ball players!” As the jockeying continued on this level, I almost lost my head. I started to drop my bat and go over and take a sock at one of them.

Robinson elaborated in a later autobiography, 1978’s I Never Had It Made: An Autobiography:

For one wild and rage-crazed minute I thought, “To hell with Mr. Rickey’s noble experiment.” It’s clear it won’t succeed…I thought what a glorious, cleansing thing it would be to let go. To hell with the image of the patient Black freak I was supposed to create. I could throw down my bat, stride over to that Phillies dugout, grab one of those white sons of bitches and smash his teeth in with my despised Black fist. Then I could walk away from it all.

Of course, he didn’t stomp over to the Phillies dugout and start a brawl. As he wrote in his first book, “I remembered Branch Rickey’s warning me of what I’d have to take without losing my temper. So I pretended I didn’t hear them. I gritted my teeth and vented some of my anger on a solid single.”

Robinson faced dozens of incidents like this through his first year in the big leagues. But by the end of 1947, he was baseball’s rookie of the year, and the Dodgers won the pennant.