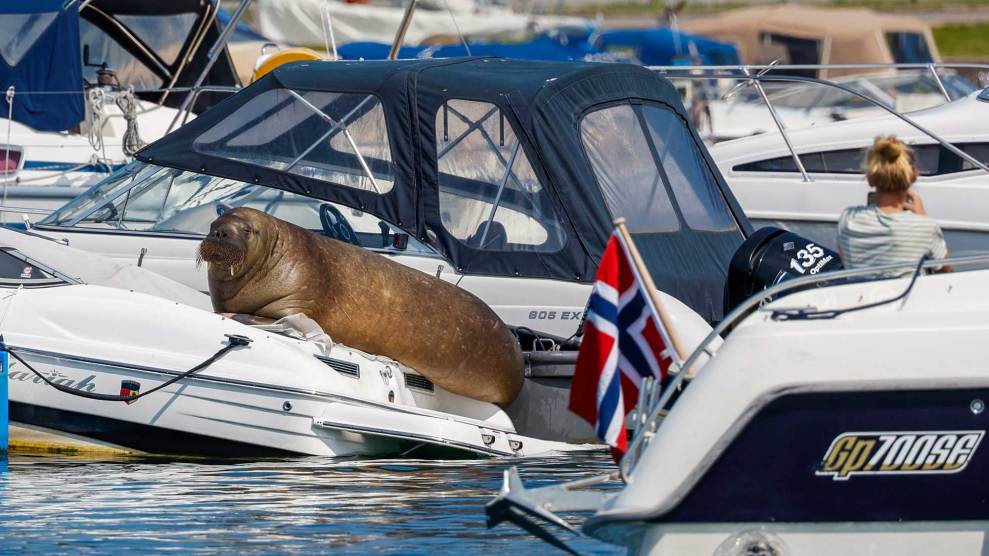 Just a few weeks ago, a 1,300-pound walrus named Freya was enjoying the sort of Hot Girl Summer the average pinniped could only dream of. She’d left her native Arctic waters and recently ended up off the coast of Oslo, Norway, where she delighted onlookers and the animal-loving internet by hauling herself onto small boats, eating scallops and mussels, and generally living a life of leisure and glamour.

Freya the walrus was spotted off the coast of Oslo, Norway, where she was filmed filling up a boat with water in order to use its bilge pump as a shower.

Freya has become a local celebrity in European waters because of her inclination to get into hijinks with human vessels. 😆 pic.twitter.com/GC2ubUEjc5

Big story in Norway this summer is a walrus we've named Freya has made it to our shores and is touring the country, laying around and sinking boats pic.twitter.com/rQolsxd88b

Her appearance in the Oslo Fjord was extremely unusual, since walruses are wary of humans and tend to stay farther away off the Norwegian coast. The novelty of it all made her an instant sensation; even Judy Woodruff couldn’t contain her herself in this whimsical summertime ode to Freya on PBS NewsHour earlier this month:

But as Freya’s legend grew, more and more folks wanted to see her up close. As the New York Times points out, the Oslo Fjord is full of water-going recreationists in the summer, and people started swimming with Freya, taking her picture, and even throwing things at her—so much that she had begun chasing off paddle boarders and kayakers. The Norwegian Directorate of Fisheries warned the public to stay away from Freya, for their safety and hers. Last week, officials said they were weighing several options, including relocating Freya, but warned she might have to be killed if people wouldn’t listen.

In a statement, Frank Bakke-Jensen, the director general of the directorate of fisheries, cited the “continued threat to human safety” in making the decision to kill Freya. “We have sympathies for the fact that the decision can cause reactions with the public, but I am firm that this was the right call,” Bakke-Jensen said. “We have great regard for animal welfare, but human life and safety must take precedence.”

Rune Aae, a biologist at the University of South-Eastern Norway, called the decision “too hasty a conclusion” in a Facebook post Sunday. Aae had been tracking Freya and posting the results on a Google map so that people would know where the walrus was and to give her wide berth. “Everyone would be able to know where Freya was and could act accordingly, i.e. not engage in water activities near her,” he wrote.

As wildlife ecologist and conservation biologist David Steen has pointed out on Twitter, the circumstances surrounding Freya’s death have become all too common. Humans, as you may have noticed, are pretty bad at listening—and particularly bad at listening to officials urging them to give wild animals some damn space. Steen included Freya in a thread pointing out other recent examples of too-close human-animal interactions, including links to bisons goring visitors at Yellowstone National Park earlier this summer and hordes of gawking tourists crowding the banks of a crocodile-filled river at Australia’s Kakadu National Park. Unlike those other cases, though, Freya paid for this sort of human ignorance with her life.

Not sure what you're supposed to say about this anymore.https://t.co/GJBRFu0AMm