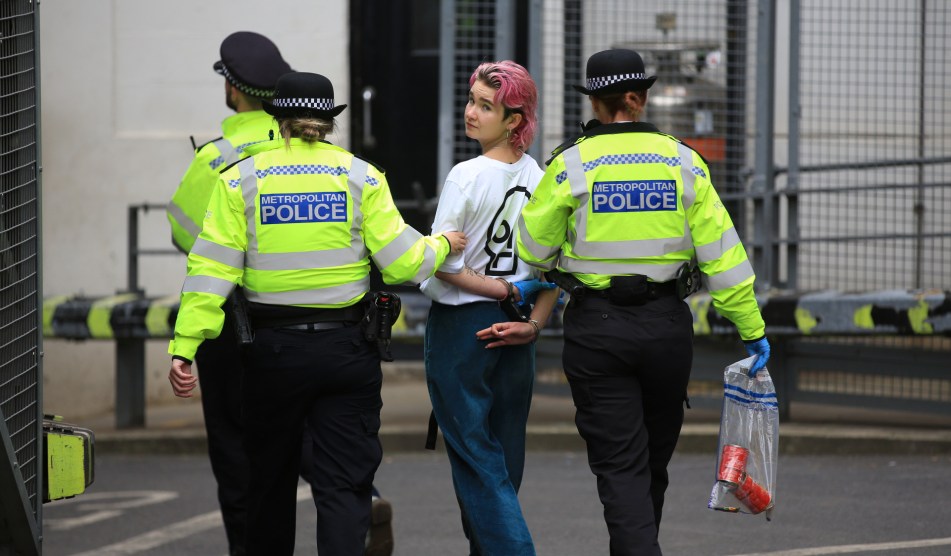 A Just Stop Oil activist is arrested after Van Gogh's sunflowers had soup thrown on it at the National Portrait Gallery.Martin Pope/Getty

Here’s a video of one of the two people from Just Stop Oil explaining why they threw a can of soup at “Sunflowers” by Van Gogh last Friday at London’s National Gallery.

listen to her explain the Van Gogh soup protest.

she’s got a point, no? pic.twitter.com/cObcWNx8aP

“I recognize that it looks like a slightly ridiculous action; I agree it is ridiculous,” she told the camera. “But we’re not asking the question, ‘Should everyone be throwing soup on paintings?’ What we’re doing is getting the conversation going so that we can ask the conversations that matter. Questions like: Is it OK that [Prime Minister of the United Kingdom] Liz Truss is licensing over one hundred new fossil fuels licenses?”

That seems pretty straightforward. There has been much consternation that this is not the right kind of protest—with condemnation even elevating to a proposal from the UK Home Secretary to crack down on actions in order to put the “safety and interests of the law-abiding majority first.” But as far as protests go, this one could be considered ordinary, even staid. Young people enraged about the climate crisis sought to garner media attention to fight it. Just Stop Oil wants to ensure “the government commits to ending all new licenses and consents for the exploration, development, and production of fossil fuels in the UK.” Even that demand, in the grand scheme of protests for climate action, is rather basic.

And yet, there was the usual outrage and hand-wringing. “Merely getting publicity for a cause doesn’t automatically translate into generating support for it,” investor Paul Graham tweeted. “If you get publicity for a cause in an obnoxious way, you’ll generate opposition to it.” Even the Associated Press snuck in a note from a climate scientist that vandalism “alienates many people we need to bring into the fold.”

One could argue the opposite. That this protest could be viewed as a brilliant attempt to bring forward the problem we face: The destruction of beauty. And it’s always worth repeating the obvious thing about all protests. The spectacle is the point.

But, personally, I find the whole “getting the conversation going” conversation when it comes to protesting sort of silly.

I don’t need to defend the soup protest as a great act of civil disobedience (and don’t think it was) in order to recognize the response to it is indicative and more important. The rapid-fire impulse to condemn seems to suggest that any protest that doesn’t fit within the narrow framework of the same politics that has enmeshed us in the current climate crisis will be deemed unreasonable, alienating, and counter-productive. And in the end, isn’t that—well—counterproductive in itself?

The supposed concern that throwing soup at expensive art may alienate some unnamed group evades the truth: You don’t like it. It is alienating you. And you should ask yourself, perhaps, why. What is so offensive about some soup hitting a frame of a masterpiece?

Maybe it is even simpler. A lot of people hate young people and they hate direct action and they especially hate young people directly acting. The political efficacy as deemed by whether or not that set approves is a dumb goal. In fact, maybe the action isn’t recruiting those who would be offended by tossing a can of soup or seemingly any protest at all. Maybe the whole point is the recruitment of another set of people.

Either way, these are debates about the merits of a protest. Action can always be critiqued. It is a silly attempt to find the perfect way to do something that should be constantly done—fight back. And it is a cover for what many actually want to say: Don’t boo, vote; leave it to our elected betters; propose policy solutions.

Yet the existential reality is that all our lives are likely to be altered, fundamentally and likely for the worse, by climate change. To admit that is terrifying. In art speak: To admit that is to gaze upon death.

So, the more important point is probably for those who didn’t like the soup can protest: Get used to it. The world is getting hotter; the kids are getting angrier. Protests will erupt that seem cringe, annoying, and dumb. If this small episode bothers you excessively, you may need to buckle up. It will be a rough ride when it’s time to blow up a pipeline.