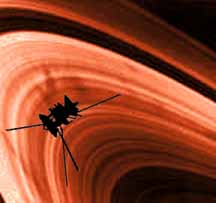 It sounds a lot like the plot of a sci-fi blockbuster: A deep-space probe powered by a highly radioactive substance could wipe out humankind.

But to anti-nuclear activists and a number of scientists, this is no movie. In just a few weeks, NASA will launch its celebrated Cassini spacecraft for a deep-space exploration of Saturn’s rings and moons. The $3.3 billion mission has sparked an intense battle over the 72.3 pounds of plutonium 238 — the largest amount ever carried into space — that will drive Cassini’s scientific instruments.

As the launch date nears, Cassini’s radioactive cargo is attracting increased scrutiny from the mainstream press. It has all the elements of a sensational story: A nerve-racking flyby of Earth two years after launch will bring it 500 scant miles from the planet’s surface; scientists disagree wildly over the consequences of a potential accident; and activists claim that NASA could, but refuses to, use solar energy instead.

So what’s the deal?

NASA defends the mission. By its calculations, the chances of an accident that could release plutonium are incredibly slim –less than 1 in 1,400 at launch (this is when the space shuttle Challenger exploded in 1986), 1 in 476 just after launch, and less than 1 in a million during Cassini’s flyby of Earth in August 1999.

If a worst-case-scenario accident occurs — if the probe re-enters Earth’s atmosphere and spews vaporized plutonium — NASA’s 1995 environmental impact statement estimates that up to 5 billion people could be “exposed.” But the individual doses of radiation would be so small — 1 millirem per year — that at most 120 humans could die from Cassini-caused cancer over 50 years. It wouldn’t be possible to distinguish those fatalities from the umpteen-thousand deaths caused by other sources of radiation.

But critics disagree with NASA’s calculations. “Give me a break. They’re making these numbers up,” says Michio Kaku, a professor of nuclear physics at the City University of New York, adding that by his calculations of NASA’s own accident scenario, some 200,000 people could die if Cassini crashed in an urban area. “This is a science experiment, and we are the guinea pigs.”

Adds Alan Kohn, NASA’s emergency preparedness operations officer during the Galileo and Ulysses launches of 1989 and 1990, both of which carried plutonium: “You make a series of assumptions…. All of these numbers are what we at NASA call a ‘SWAG’ — scientific wild-assed guess.”

Richard Spehalski, program manager for Cassini at Jet Propulsion Laboratory (JPL), says it’s the opponents of the project who aren’t paying attention to the facts.

“They’re accountable to no one, the people that are making these statements and terrifying people,” he says. “They’re taking our statements and our documentation out of context and citing consequences that aren’t even possible.”

Spehalski is confident that years of engineering design, safety tests, and independent reviews confirm the safety and accuracy of the mission. The Galileo spacecraft, he notes, came within 1 kilometer of its projected flyby altitude when it swung past Earth five years ago on its way to Jupiter, carrying more than 49 pounds of plutonium 238.

“I’ve invited everyone I love to come [to the Cassini launch] including my two granddaughters. I don’t take that very lightly.”

Due to launch October 13, the Cassini mission, conducted in partnership with the European Space Agency (ESA) and the Italian Space Agency (ASI), will send a small probe through the atmophere of Titan, the most intriguing of Saturn’s numerous moons, and the only moon in our solar system known to have an atmosphere. They hope that information about the nitrogen-, methane-, and carbon-based makeup of Titan’s dense atmosphere will provide clues to Earth’s primordial environment.

A two-stage Titan IV rocket will launch the Cassini orbiter and probe from Cape Canaveral. Cassini’s seven-year journey to Saturn uses several “gravity assists” — flybys of other planets — to help slingshot the spacecraft toward Saturn. After two such maneuvers around Venus, Cassini is scheduled for an August 1999 flyby of Earth.

After soaring 500 miles above our heads at 42,300 mph, Cassini heads out, and is expected to reach the ringed planet and its moons in 2004. Once it arrives, Cassini’s orbiter will launch its probe into Titan’s atmosphere for a two-and-a-half hour data collection mission that will end when the probe crash-lands on Titan’s surface.

The orbiter, meanwhile, will spend an additional four years circling Saturn, studying its atmosphere, rings, and moons. Its instruments will be powered by three radioisotope thermoelectric generators (RTGs) that convert the heat from plutonium decay into electricity.

The Cassini mission only needs 600 to 700 watts of electricity to power its scientific instruments. But it needs that power for the length of the mission: 11 years. The Energizer Bunny aside, there is one realistic power source, says NASA: plutonium 238.

With a half-life of 88 years, plutonium 238 is 280 times more radioactive than its weapons-grade cousin, plutonium 239. And although the alpha radiation emitted by plutonium 238 only travels only a tiny fraction of an inch in the body, its potential for damage is great if inhaled. “Even though it’ll go two to three cells deep at the most, it’ll raise holy hell,” causing lung and bone cancers, says John Gofman, professor emeritus of molecular and cell biology at the University of California-Berkeley.

Because plutonium 238’s radiation travels such a short distance, humans would face the biggest risk if the probe accidentally re-enters the atmosphere during the flyby and the plutonium is vaporized.

NASA says that scenario is extremely unlikely because Cassini’s plutonium is well shielded from intense heat, pressure, or shrapnel, as from an explosion. Produced by the Department of Energy exclusively for space application, the material is processed into insoluble ceramic pellets. Seventy-two marshmallow-sized pellets are encased in iridium and graphite containers designed to withstand re-entry into Earth’s atmosphere or an explosion at launch.

In addition, the ceramic pellets themselves are designed to resist vaporization, and to break into chunks — not inhalable powder — on impact. Only particles small enough to inhale pose any danger to humans.

Gofman, who worked on the Manhattan Project and co-discovered several uranium isotopes, is concerned that NASA’s enthusiasm to explore new worlds is clouding its judgment. Likewise, Kaku is convinced that NASA’s safety tests were inadequate and that a launch explosion or inadvertent reentry during the flyby will be enough to destroy the graphite and iridium encasing, and vaporize the plutonium payload — partially or totally.

Cassini’s opponents point to the track record of past space missions involving radioactive payloads: Three of 23 such U.S. missions have failed, including the immortalized Apollo 13 lunar mission. NASA notes that in all cases, the nuclear-powered RTGs remained intact.

But Russia hasn’t been so lucky. Six of Russia’s 39 nuclear space missions have failed — just last November, the Russian Mars ’96 spacecraft malfunctioned shortly after launch and hurtled back to Earth. Debris from the craft, including a RTG with a half-pound of plutonium, may have fallen over a wide swath of Chile and Bolivia.

In addition, critics worry about Lockheed Martin’s Titan IV rocket. One of the 20 Titan IV launches to date has ended in disaster — a Titan IV launched from California’s Vandenberg Air Force Base in 1993 blew up 100 seconds after lift-off.

None of the risks are necessary, Cassini’s critics say, because NASA could be using solar energy in place of plutonium. In 1994, ESA, NASA’s Cassini partner, announced a breakthrough in development of solar technology for deep-space applications. Within five years, ESA scientist Carla Signorini told Florida Today in 1995, high-efficiency solar cells could be ready for deep space.

Signorini’s optimism turned out to be premature, however. Studies by NASA and ESA have found that to provide Cassini’s instruments with power from the sun, the solar arrays would have to be large — about as large as tennis courts. Cassini would never even get off the ground.

“Our desire is not to fly nuclear power sources just because they’re there,” Spehalski says. “Our desire is to get the maximum amount of scientific information with the available resources…. We haven’t found a way to do that with solar.”

On other missions, NASA has found a way. For example, the wildly successful Mars Pathfinder micro-rover used solar cells for power — but, Spehalski notes, Mars is a lot closer to the sun. Saturn is more than six times farther from the sun, making solar cells iffy at best.

That leaves plutonium 238 as the most reliable power source available for the deep-space mission to Saturn, Spehalski says. Nuclear-powered RTGs have successfully provided power for the Voyager explorations of Jupiter, Saturn, Uranus, and Neptune, as well as the Pioneer, Galileo, and Ulysses missions.

Not good enough, say activists, who want NASA to wait until safer power sources are available rather than take life-threatening risks now. “Why not wait? Saturn’s not going anywhere,” says Jim Ream, a NASA electrical engineer and 30-year NASA veteran who recently began speaking out about Cassini’s dangers. It’s just not worth the risk to the future of the space program, Ream says, or to Floridians who are in the immediate fallout zone of a launch accident.

Reams says he’s going to do what he did in 1989 when NASA launched Galileo: “I don’t plan to be in the county.”

Leslie Weiss is a freelancer writer based in Oakland, California.