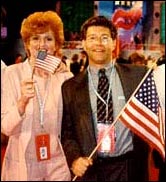 Looking forward to watching the Democratic and Republican National Conventions this summer? Didn’t think so. Some say it will be like watching a tennis game where both players will be on the same side of the net.

You will have an alternative, however, as long as you have access to the Internet, or possibly cable television, or can get yourself to Philadelphia July 30 through Aug. 3 or to Los Angeles Aug. 13 through Aug. 17. There, an eclectic collection of activists, with help from various celebrities and maverick politicians, will be running innovative “Shadow Conventions” near the two parties’ traditional confabs.

Featured names include Sen. John McCain, the Rev. Jesse Jackson, and actor Warren Beatty. Also on the bill: regular folks personally affected by some of the nation’s ills, from the growing gap between rich and poor to the excesses of the war on drugs. A major force behind the Shadows is former conservative vamp Arianna Huffington, with a hefty assist from billionaire George Soros’ Open Society Institute, which has given $175,000 toward the projected $500,000 project.

The Shadows will offer “a way of having a voice,” says Jim Wallis, convener of Call to Renewal, a coalition of faith-based organizations and a co-convener of the Shadows (other co-conveners include Common Cause and the National Campaign For Jobs and Income Support, among others). “We’re having the town meetings the big conventions ought to be. [Theirs are] more coronations than conventions.”

The Shadow Conventions will focus on three issues: campaign-finance reform, the war on drugs and the growing gap between rich and poor. A day will be given to each of these topics at both Shadow Conventions, with a kick-off rally on the preceding Sunday night, in coordination with “Rock the Vote” in Los Angeles. Panels of experts will hold sway from 10 a.m. to 2 p.m. each “issue day,” followed later in the afternoon by organizing workshops and discussions. In the evenings, Shadowers will watch the, er, conventional conventions on simulcasts, seasoned with political satire from the likes of Harry Shearer, Al Franken, and “Politically Incorrect” host Bill Maher.

Other parodies are planned as well, along with interactive opportunities like the “bozometer,” which will enable online viewers to vote on Democratic or Republican Convention speakers. Most of the proceedings will be carried on the Shadow Conventions Web site. C-Span also may pick them up.

In the campaign finance reform arena, Ellen Miller, president of Shadow co-convener Public Campaign, says she’ll be “raising the flag high for the most systemic reform — a full public-financing, clean-money system.” Such systems, she points out, have already been enacted in Maine, Arizona, Vermont, and Massachusetts, and two more states — Missouri and Oregon — will have proposals for them on their ballots in this election.”

Miller sees action in the states building towards public financing on the federal level. Polls, she says, indicate that almost two-thirds of Americans want public financing as long as candidates agree to spending limits and take no private money. “We have to break through the politicians’ hold on this issue, and the only way to do that is to take it to the American public,” says Miller.

Lindesmith Center Director Ethan Nadelmann will be setting the tone for the drug war discussion. Drug abuse can certainly cause enormous damage, and needs to be reduced, says Nadelmann, but “drug prohibition, like alcohol Prohibition decades ago, generates extraordinary harms as well. It, not drugs per se, is responsible for creating vast underground markets, criminalizing million of otherwise law-abiding citizens, and corrupting both governments and societies at large.”

Nadelmann sees the Shadow Conventions as one way of putting drug policy reform on the map. He’s intent on countering what he sees as the draconian war-on-drugs “spin” the main parties will undoubtedly provide at their conventions. Nadelmann will be aided by numerous individuals whose lives have been damaged by current drug laws. According to Nadelmann’s Lindesmith Center, nearly 500,000 non-violent drug offenders arebehind bars in the US, a number that has increased ten-fold in two decades.

Call to Renewal’s Jim Wallis, along with Chuck Collins, co-director of United for a Fair Economy, will lead the discussion on the widening gap between rich and poor. “There’s something wrong when we have a record economy and rising inequality at the same time. This rising tide is lifting all the yachts but not all the boats,” says Wallis. “If we don’t deal with this question in a time of prosperity, I’m not sure when we will.”

Wallis says the big party candidates are so busy talking about “soccer moms” they’ve forgotten about what he calls “Burger King moms.” He coined the term after observing a woman at his local BK: “She was racing back and forth between the drive-in window and a table in a corner where there were three kids sitting — her kids. She was helping them with their homework.”

The catalyst behind the Shadow Conventions is the controversial syndicated columnist Huffington. In recent years, since her days as an acolyte of Newt Gingrich and wife of Michael Huffington, the former Republican congressman who broke spending records in his failed attempt to win a US Senate seat in 1994, Huffington has taken a sharp left turn. Exhibit A: “When Al Gore talks about ‘leaving no children behind’ at the Democratic Convention, he’ll be doing it in a city [Los Angeles] where one in three children live in poverty,” she intones. “We want acts, not rhetoric. ”

Huffington’s displeasure with the two-party system is not driving her into the arms of any third-party candidate. Ralph Nader is expected to address the Shadow Convention in Philadelphia, and Huffington says she likes him. But she’s opting for “none of the above” when she enters the ballot booth in November.

The Shadow Conventions do have nay-sayers, of course. One is Democratic Congressman Barney Frank. He dislikes what he sees as the Shadow Conventions’ “plague on both your [Democratic and Republican] houses.” He thinks there are some significant differences between Al Gore and George Bush: “abortion, gay rights, gun regulation, affirmative action, and race,” to name just a few. Frank says the Shadow Conventions do a disservice by ignoring these clear differences. He believes the dissenters should work for Gore’s election in the short run while pushing to create better choices in the long run.

Comedian Al Franken, for one, says he will be pointing out those differences when he reenacts, along with Arianna Huffington, the “Strange Bedfellows” routine the two did for the cable channel Comedy Central during the 1996 conventions. “I’m actually going to take the pro-status quo side … we did it in ’96, when I was the liberal and she was the conservative. Now she’s way to my left … I’ve stayed exactly where I was.”