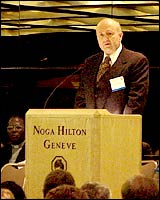 That call to action went out in September from the Catholic Family and Human Rights Institute (C-FAM), one of several groups that are becoming increasingly active in promoting their agenda — a global version of traditional family values — at the United Nations. UN conferences on women’s issues have been the near-exclusive domain of progressives, but recent years have seen a surge of lobbying by religious conservative groups — lobbying that could affect the UN’s stance on issues from contraception to sex education to gay rights.

UN conferences have addressed questions of women’s roles and population growth since the mid-1970s, but until the late 1990s, religious conservatives largely sat out the conversation, dismissing the world body as irrelevant to their goals.

But that changed with the end of the Cold War, which freed up the UN to put more energy into areas such as women’s issues. Several recent high-profile UN conferences, notably the 1994 population conference in Cairo and the 1995 women’s conference in Beijing, alarmed conservatives.

The Pope himself condemned what he declared to be promotion of contraception and abortion at the population conference in Cairo, and called on people of faith to get involved in forming UN policy. Richard Wilkins, managing director of the World Family Policy Center, attended his first UN meeting in 1996 and says he was startled at what he found. “I saw some very important political issues and very important policy issues being debated by the narrowest range of political viewpoints that I’d ever seen in my professional career,” says Wilkins. In response, he began organizing conservatives to lobby the UN on family issues.

Concerned religious conservatives founded both C-FAM and Wilkins’ WFPC in 1997. The first World Congress of Families, a more-or-less biannual meeting of socially conservative organizations held by the Howard Center, took place the same year. At the second congress in 1999, speakers included the widow of assassinated Egyptian president Anwar al-Sadat and Vatican aide Cardinal Lopez Trujillo. The congress aims to unite religious conservatives of many faiths around shared goals, including opposition to gay rights and abortion, and recognition of the nuclear family — a married man and woman, and their children — as the fundamental social unit.

This activism culminated in an unprecedented showing of several hundred religious conservatives at meetings leading up to Beijing+5, a conference held earlier this year to review progress on goals set at the 1995 conference. At the unusually contentious meetings, pressure from conservative groups helped defeat attempts to add protections for gay rights to the outcome document — the “stinging defeat” that C-FAM cited in its recruiting letter.

C-FAM is already rallying the troops to appear at an upcoming UN conference being held to review progress since the 1990 World Summit for Children. Conservatives aim to swing the discussion on HIV prevention among teenagers away from practices like condom distribution and sex education and toward abstinence.

While many of the UN’s decisions in this arena have already been made, the consensus-centered nature of the UN decision-making process makes its formation of new policies uniquely vulnerable to disruption by a small coalition of like-minded member states.

Recognizing this, conservatives are taking a pragmatic approach: C-FAM President Austin Ruse has declared his goal is not to convince the majority, but to organize 12 nations (which he declines to name) whose domestic policies are in sync with those of religious conservatives into a “permanent United Nations pro-family bloc.” Among 189 member states, 12 won’t win a vote, but can block consensus.

A vocal conservative presence can also make it easier for governments looking for a way out of commitments they’ve already made, says Charlotte Bunch, executive director of the Center for Women’s Global Leadership at Rutgers University and a veteran of UN conferences. The UN’s policies “are only going to be fulfilled if governments and international institutions continue to feel pressure from people to fulfill them,” she says.

It’s too early to tell just how much clout the religious groups will gain, but progressives are watching nervously. If George W. Bush wins the presidency, the conservatives’ efforts may get a boost, perhaps even in the form of support from the official US delegation, says Jennifer Butler, associate director of the progressive Presbyterian United Nations Office. “This is an emerging dynamic and it may fade,” she says. “Or it may grow into a major movement that we have to fight.”