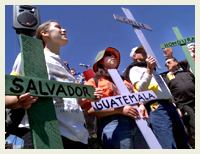 Since students at the University of Wisconsin protested the presence of napalm manufacturer Dow Chemical on their campus in 1967, college students have been fighting the corporate world’s creep into the academy. During the last school year, activists on many campuses sought to put their university’s academic mission ahead of corporate partnerships. The flawed presidential election, campus race relations, and poverty wages for university employees also raised student ire. Here, our 2001 ranking of the best of student activism.

1. Yale University Student protesters forced Yale and its business partner Bristol-Meyers Squibb (BMS) to relax the patent on Zerit, an AIDS drug developed by Yale scientists that brought BMS $618 million in profits last year. The students collaborated with Doctors Without Borders in an attempt to shame the university into making the drug cheaply available in Africa. It worked: Yale and BMS announced in March that they would allow companies to produce a generic version of the drug, royalty-free.

2. Pitzer College When the seven-college Claremont consortium in California announced it wanted to build a new biotech campus — promising industry backers broad influence over the curriculum — students at Pitzer took to the streets. They spent the summer of 2000 collecting thousands of signatures to force a public referendum on the plan. University officials shelved the proposal temporarily, but protests continued throughout the school year. At a March sit-in, students chained themselves to garbage cans filled with concrete; 10 were arrested and removed — with the aid of forklifts.

3. Pennsylvania State University Race relations at Penn State, where African Americans make up only 4 percent of the student body, were stretched to a breaking point by a series of anonymous death threats aimed at black students. In April, hundreds of protesters took over the student union to demand that the administration address the climate of racial intolerance. The sit-in ended 10 days later when the school’s president promised to establish an Africana Studies Research Center and create $350,000 in new minority scholarships.

4. Harvard University The 46 students who staged a three-week occupation of the president’s office in May succeeded in training a national spotlight on the low wages the nation’s wealthiest university pays its custodial and food-service workers. The protest — which stirred debate about the living-wage movement in media as diverse as Fox News, Business Week, and The Nation — ended when Harvard promised to pay food-service workers at least $10.32 an hour, although other employees will continue to make considerably less.

5. Howard University After fellow student Prince Jones Jr. was shot five times and killed last fall by an undercover officer from Prince George’s County, Maryland, in a case of mistaken identity, more than 200 Howard students marched on the U.S. Department of Justice. Their outcry caught the attention of Vice President Al Gore — who interrupted a campaign speech at Howard to speak out against Jones’ killing — and prompted a federal investigation of the use of lethal force by the Prince George’s police department.

6. University of Michigan As we reported last year, Michigan joined the Worker Rights Consortium, which polices the labor practices of university apparel licensees. The move initially prompted Nike to pull out of licensing negotiations with the school, but in January of this year, Nike agreed to reforms and signed a seven-year pact. Just weeks later, however, a consortium audit found Nike was continuing to do business with a Mexican factory that had fired striking workers. Thanks to student pressure, Nike agreed in February to push the factory owners to improve working conditions and reinstate the workers.

7. Florida A&M University Students at this predominantly African-American school in Tallahassee were outraged at the disproportionate number of black voters disenfranchised in the 2000 presidential election. On November 10, one day into the recount, some 800 Rattlers occupied three floors of the state capitol, demanding, and later winning, a meeting with Florida Secretary of State Katherine Harris.

8. Oberlin College Last November, 110 Oberlin students journeyed 818 miles from their Ohio campus to Fort Benning, Georgia, to demand that the Army close the Western Hemisphere Institute for Security Cooperation. The Institute, known until last year as the School of the Americas, has a dark history, having trained many Latin American military officers later tied to human-rights atrocities.

9. University of California at Los Angeles In March, 1,000 UCLA students rallied to demand that the UC system reinstate affirmative action, which has been banned since 1996. The students stormed Royce Hall and forced the cancellation of a televised debate among L.A. mayoral candidates, several of whom stayed to join the protest.

10. University of Wisconsin The Badgers stand out for their commitment to Ecopledge, an organization that attempts to persuade corporations to be more environmentally conscious. The 9,000 UW Ecopledge signers — more than a fifth of the student body — have vowed not to work for, or purchase from, the likes of Boise Cascade, Disney, or DaimlerChrysler until they improve their environmental records.