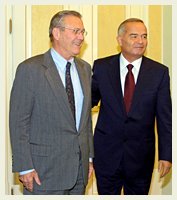 The US-led war in Afghanistan has transformed the former Soviet republic of Uzbekistan from a geopolitical backwater into a critical American ally, with 1,000 US troops currently stationed at a base near the country’s southern border with Afghanistan.

Journalist and editorial cartoonist Ted Rall was one of the few American reporters to visit Uzbekistan in the years before it so suddenly became the likeliest launching point for any attack into Afghanistan by US ground troops. He found a land where the shadows of the soviet state at its most repressive still loom large.

“So,” the Uzbek consular official muttered as he inspected my visa application, “do you plan to visit any countries other than Uzbekistan on your journey?”

I looked around his office. A decomposing copy of the former Soviet newspaper Izvestia lay on his desk next to two busts: one of Lenin, the other of Tamerlane, the 14th century conqueror of Central Asia. That, plus the chairs he and I were sitting on, comprised the New York office of the Uzbek consulate general in 1997.

“Actually, I’ll enter Uzbekistan over land, by bus from Kyrgyzstan,” I told him. “Before that I will have visited Kazakhstan and afterwards I’ll take the train to Turkmenistan.”

The fortyish apparatchik shot me a glare I’d see at countless border crossings and militia checkpoints over the next four years during several trips to Central Asia. “Kyrgyzstan? Why would you want to go there? Sure, the mountains are nice, but Switzerland has mountains. Turkmenistan and Kazakhstan are nothing but desert and steppe, steppe and desert. Worthless! Now Uzbekistan — we have all the great cities, 2,500 years of history, the best food. You should really skip those other places and spend your time in Uzbekistan.”

As it would turn out, that response encompassed the attitude of the Uzbek government: controlling, arrogant, insensitive, but undeniably aware they are in possession of some of the best real estate in Central Asia.

Uzbekistan is less threatened by domestic Islamic fundamentalism than Pakistan, largely because the country’s Muslim establishment has been the target of a brutal state campaign of repression. Pious Muslims are often jailed for practicing “unregistered” religious activities such as “possession of unapproved literature,” and suspected members of the Islamic Movement of Uzbekistan, a guerrilla group that aims to turn the country into an Islamic theocracy.

The country borders what is becoming a key swath of northern Afghanistan. Mazar e Sharif, a Taliban stronghold that has been the site of furious recent fighting, is less than 100 kilometers over the border. Given its strategic location, Uzbekistan has become an important staging ground for American forces. Eager to find friends in the West, President Islam Karimov has opened Uzbekistan’s air space to allied aircraft and allowed some 1,000 US troops to install themselves at a base near the Afghan border.

That does not mean Karimov is likely to follow his new allies’ more democratic practices, however. Karimov was the Uzbek republic’s Communist Party boss during the days of the Soviet Union, and his approach to governing has changed little. According to Washington, D.C.-based Human Rights Watch, dissidents are often subjected to “discriminatory arrest, incommunicado detention, torture, and long prison sentences.”

The Karimov government is just as intrusive in the mundanities of daily Uzbek life.

In a region thick with repressive regimes, Uzbekistan stands out. Karimov is a control freak in the Stalinist mold, as are the bureaucrats he employs. The simplest chores, whether mailing a letter or buying a train ticket, are nerve-straining marathons in this most Soviet of former Soviet lands.

I once spent four hours trying to escape Samarkand via the Trans-Caspian Railway to neighboring Turkmenistan. “You are foreigner,” the counter clerk, besieged by a hundred would-be patrons, informed me. “You must buy tickets from OVIR [the former KGB division dedicated to stalking non-Uzbeks] office. Go upstairs.”

“The OVIR office is closed. No one is there,” I said, smiling, trying not to let the 120-degree heat get to me.

“But they’re closed. Please sell me a ticket.”

Uzbekistan is the land of the police checkpoint. On main highways, cars and buses stop for searches and shakedowns an average of once every eight to 12 miles. Many of these sprang up in the wake of a rash of bombings of government ministries in 1998. Karimov himself narrowly escaped being blown up. In response, Karimov embarked on what would become a largely unnoticed war against his own nation’s Muslim minority. The campaign started with the mass hangings of Muslim militants supposedly implicated in the plot to assassinate Karimov.

Since 1999, as many as 5,000 Muslim men have been imprisoned for little more than their faith.

The ubiquitous checkpoints don’t catch many terrorists, but they are certainly good for the local constabulary’s financial security. Each one requires negotiations over bribes that range from petty (25 cents) to debilitating ($50). The haggling typically requires an hour or more, a state of affairs that encourages this nation of erstwhile steppe nomads to stay home as much as possible.

Checkpoint guards are prototypical bullies–stupid, mean and often drunk. Last year, while thumbing through one of my traveling companion’s passport at two in the morning, a fortysomething Uzbek militiaman demanded to meet her.

“She is a goddess,” he smirked obscenely. “Bring her here.”

“She’s on the bus, asleep,” I countered.

“Bring her now! I must meet this beauty.”

I weighed my vague fears for her safety against the fact that this guy was armed and did, after all, enjoy the legal right to ask her to be interviewed.

On the bus, I woke her up and urged her to muss up her hair. The guard was disappointed at my friend’s disheveled appearance.

“Uzbek women would never let themselves go like this,” he nodded disapprovingly.

Uzbekistan was created out of thin air in 1924, when Stalin decreed the establishment of “homelands” for the nomadic steppe tribes of Central Asia. The Turkmen, Uzbeks, Kyrgyz, Kazakhs and Tajiks were assigned more or less arbitrary republics that retained the same borders after the collapse of the USSR in 1991.

Uzbekistan suffered under Soviet dominance — the Russians drained the Aral Sea for cotton irrigation, creating one of the world’s worst ecological disasters — but won the historical sweepstakes. It got the legendary Silk Road trading cities of Samarkand, Bukhara and Khiva.

Samarkand’s center, built by the conqueror Tamerlane, is a world-class tourist attraction — though hardly any tourists ever go there. Perfectly proportioned minarets frame a complex of robin’s-egg-blue mosques that blend into the clear Central Asian sky.

Wandering around the former student dorms in the courtyard behind the city’s central mosque is to travel back in time; everything’s original down to the wooden doors. It’s timeless, tragic and every bit as subject to corruption as the rest of the country.

“Hey, sir,” a policeman offered, “for $10 I’ll take you to the roof–you can take pictures of the sun setting over the city.”

I took him up on the offer, accidentally knocking a 14th century brick off the roof in the process.

Even the US government has — currently busy cementing closer ties to the Karimov government — has long been aware that the country’s freedoms are crumbling along with its monuments.

Last year, the Department of State’s omnibus human rights report harshly criticized Uzbekistan, describing it as “an authoritarian state with limited civil rights” whose already poor human rights record only worsened as the government “continued to commit numerous serious abuses.” The country was listed along with China and Sudan as having imposed “severe restrictions” on press freedoms. It was cited along with Algeria, Sierra Leone and Cameroon for the “widespread” use of torture by security officials.

Still, such reports do not seem to overly concern the Karimov government. Officials in Tashkent appear firmly convinced that their colleagues in Washington are willing to overlook human rights abuses in the interests of a united campaign against the Taliban — and access to some prime real estate.