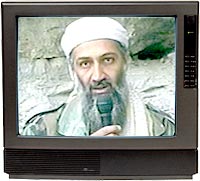 When the White House, via National Security Advisor Condoleezza Rice, “requested” recently that the networks not air any future unedited videos of Usama bin Ladin, that tacit order met largely with a frightening silence. America’s elected representatives voiced no complaint about this effort to black out discomfiting news, and — far worse — the broadcast media’s top managers sank quickly to their knees. While some newspapers did editorialize against it, that blunt stroke of intimidation moved the broadcast media’s bosses mainly to salute the power that had just muscled them. “It was very useful to hear their information and their thinking,” CNN chairman Walter Isaacson told the New York Times. “After hearing Dr. Rice, we’re not going to step on the land mines she was talking about.” Rupert Murdoch called full compliance his network’s “patriotic duty.”

There are some countries, certainly, where state suppression of the news is considered “patriotic.” The government of China, for example, no doubt saw it as their “patriotic duty” in 1993 to tell Murdoch to remove the BBC’s broadcasts from Star TV, his Asian satellite service, because of the BBC’s tactless coverage of the Tienanman Square massacre; Murdoch — then as now — obliged. But in these United States our Constitution, with its hallowed First Amendment, has it otherwise. Here, the government’s attempts to control the news are unquestionably un-patriotic, whatever Rupert Murdoch thinks, and however genuinely terrifying the terrorist threat. It’s all the more disturbing, then, to cosider the range of this administration’s efforts to squelch important but embarassing news, and the extent to which at least the broadcast media have so far proved willing to abet them — a trend that bodes nothing but ill for American democracy.

This is an administration apparently out to dominate all discussion on everything related to this new war. Such repressiveness was evident in Ari Fleischer’s unsuccessful attempt to extend Rice’s efforts by browbeating newspapers into not reprinting transcripts of bin Ladin’s speeches, and his not-too-subtle warning that “Americans should watch what they say”; in Bush’s short-lived and ill-managed move to limit Congressional access to classified intelligence; in Colin Powell’s efforts to induce Al Jazeera, the Arab world’s only independent TV network, to tone down their broadcasts of what the State Department deems “inflammatory rhetoric”; in the Pentagon’s temporary cancellation of daily press briefings for reporters; and in John Ashcroft’s recent statement urging federal agencies to think two or three times before granting FOIA requests.

Rice’s veiled order to the networks had less to do with saving us from any clear and present danger than with her employers’ drive to control information and potentially keep us in the dark. And in their quick compliance with that order, those who run the major networks made it clear that we cannot count on learning anything from them that the administration doesn’t want released.

As for the specific issue of airing video of Bin Ladin himself: First of all, we can dismiss the Bush team’s ludicrous contention that bin Ladin might be sending “coded signals” to his agents. Even if the terrorists were all robotically attuned to their paymaster’s wardrobe or facial tics, in this wired world they certainly would have no trouble finding his oration on the Web, or via TV satellite, since Qatar’s Al Jazeera shows the tapes, as does the BBC. Thanks to the White House and its high-level courtiers in the media, we Americans — or those of us without the proper hardware — are now the only people in the whole developed world who can’t actually hear what our enemy is saying about us. That’s an odd distinction, considering we are also his main targets.

Certainly, in wartime there are valid reasons to suppress an enemy’s public broadcasts. For example, in nations haunted by a fascist past, it’s arguably sensible to try to keep a lid on the intoxicating spiels of those persistent enemies — foreign or domestic — who would turn back the clock. And in a country menaced by a mighty neighbor, and not yet ready to fight back, it’s probably a wise move not to air the bellicose addresses of the enemy leader, because it could hurt national morale at a decisive moment. Thus the BBC did not broadcast the Fuehrer’s first speech to the Germans after war had been declared, although the network had often carried his pre-war speeches. Such exposure might conceivably have spooked the British people, and emboldened Britain’s fascists to pitch further appeasement, or even an alliance.

But the current situation is completely different. In this case, in fact, the White House should have done everything possible to encourage the networks to continue serving us bin Ladin on the rocks. There is, to put it mildly, not much risk that we could be seduced by a performer so fanatical and alien, and so explicitly devoted to our absolute destruction. On the contrary: To see him thanking God for all our suffering and bereavement is to hate him all the more. So honestly infuriating is that sight, moreover, that it serves the useful propaganda purpose of convincing those viewers who might be skeptical about bin Ladin’s perfidy if they were merely told about it by the US government. Since 1947, we have been mobilized against so many foreign demons that a thoughtful citizen must be forgiven for becoming just a tad suspicious when called to arms against a new Nicaragua. But Bin Ladin’s in-your-face medievalism speaks for itself; every American should get to see it, up close and personal.

Although it was the terrorists who brought on this climate of official hostility to information, it is not they who are to blame for our surrender to it. With their box-cutters and barbaric zeal, they wrought destruction on our lives, property, and economy. But they could not hurt America’s democracy. That is something that Americans alone can do. And through their close collaboration since the start of this new war, our government and several powerful media leaders have dealt democracy just such a blow. Whether it proves fatal depends on the resolve of the nation’s elite news editors and producers and their corporate shot-callers — and on the public’s readiness to pressure them into upholding their duty to the Constitution. If we allow the government and media to keep us all in nervous ignorance, American democracy will not prevail against the terrorists; it will have been destroyed regardless of the outcome of this latest war.