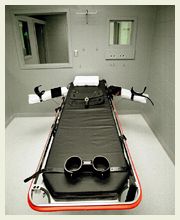 As the chief executive of McAlester Regional Health Center in McAlester, Okla., Joel Tate is in the business of saving lives. So he said it came as a shock when Human Rights Watch suggested last June that his hospital was indirectly helping to kill people.

For the past twenty years, the hospital had been the Oklahoma Department of Corrections’ sole supplier of potassium chloride, one of the drugs used during lethal injection executions — a procedure which Oklahoma carried out more often than any other state in 2001.

Human Rights Watch, as part of a larger campaign to limit states’ access to lethal injection drugs, urged Tate to sever his hospital’s drug supply relationship with Oklahoma’s prisons. The New York group’s arguments swayed Tate, who ordered an immediate end to the sale of potassium chloride to corrections officials.

That single decision marked the first victory in what could become an innovative new push by anti-death penalty activists. Rather than attempting to convince state lawmakers to abandon capital punishment, the activists are setting their sights on the pharmaceutical companies and drug distributors on whom state and federal prisons rely. The hope, activists say, is that the companies and institutions which provide lethal injection drugs will be sufficiently influenced by negative publicity to drop the practice.

Activists acknowledge that this new campaign won’t put an end to capital punishment. The goal, they say, is simply to make it more complicated — and possibly more costly — for states to carry out a death sentence.

“Drug companies are in the business of making drugs for health and well-being, not to kill people,” says Steve Hawkins, Executive Director of the Washington, DC-based National Coalition to Abolish the Death Penalty. “If a department of corrections wants to be in the business of killing people, let it be expensive, and let it be difficult.”

Lethal injection is used by the US government and military as well as 36 of the 38 states which provide for the death penalty. A combination of three drugs are used in the process: sodium thiopental, or Pentothal, an anesthetic which puts the inmate to sleep; Pancuronium, which paralyzes the muscles and stops breathing; and potassium chloride, which stops the heart.

Human Rights Watch has launched an effort targetting distributors of potassium chloride. Allyson Collins, a senior researcher with the group, says the organization is preparing a letter-writing campaign directed at two California companies — Bergen Brunswig Corporation and Cardinal Health — which are the nation’s major suppliers of the drug. Similarly, the National Coalition Against the Death Penalty has launched a letter-writing campaign directed at Illinois-based Abbott Laboratory, the sole suppliers of Pentothal.

The new effort is not without precedent. In 1994, activists joined with the American College of Physicians and Physicians for Human Rights to launch a campaign aimed at discouraging doctors and other medical professionals from taking part in lethal injection executions. Since lethal injection involves the administering of drugs normally used for medical purposes, prison officials often ask that heath care professionals be involved, with some states even requiring their presence.

“It is hypocritical for health professionals to be involved in the death of individuals, instead of promoting health and life,” argues Abe Bonowitz, director of Florida based Citizens United Against the Death Penalty, which joined in the 1994 campaign.

While that effort has had mixed results, death penalty opponents are hoping that applying similar pressure to drug companies will have a more far-reaching effect. Given the initial reactions from company officials, however, the campaign could be a long and difficult one.

Most of the companies targeted in the campaign insist they cannot be held accountable for how corrections officials use the drugs, all of which have other medical uses. Officials at Abbott, for instance, claim they have already tried to keep their product from being used in executions.

“Abbott does not support the use of Penthothal in capital punishment,” says Abbott vice-president Catherine Babington. “In fact, (we) communicated with departments of corrections in the United States to request that this product not be used in capital punishment procedures.” But the company can’t control how their products are used, she says, claiming that corrections officials purchase sodium thiopental for use as a medical anesthetic.

Officials at Baxter International, Inc., which produces Pancuronium, the third drug in the lethal injection cocktail, likewise deny responsibility for the use of their product in executions.

“Information on the proper uses of Pancuronium are clearly stated on the label, in accordance to regulatory procedures,” says Deborah Spak, a spokesperson for Baxter International, Inc. “We cannot know every use of the product that we sell. ”

Activists acknowledge that theirs will be an uphill struggle. Still, they see their efforts to influence drug manufacturers and distributors as a significant part of a broad effort.

“This is not going to be the one key in ending the death penalty, says Jeff Garis, executive director of Pennsylvania Abolitionists Against the Death Penalty. “It is part of a larger overall strategy, that is going to take multiple tactics and campaigns.”