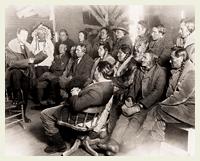 Josephine Wild Gun lives with her son’s family in a run-down house on the Blackfeet reservation in Heart Butte, Montana. Like many of her neighbors, she owns several tracts of reservation land that are held in trust by the US government. Federal officials manage her nearly 10,000 acres, leasing much of the property to private interests for grazing and oil drilling. In return, Wild Gun is supposed to receive royalties from the Indian Trust Fund, created in 1887 to oversee such payments to Native Americans.

But despite the lucrative leases, Wild Gun has never received more than $1,500 a year from the trust fund. A few years ago, the payments began trickling off; one check totaled only 87 cents. When her husband died in 1994, Wild Gun had to borrow money to pay for the funeral. Now in her early 80s, she survives on less than $400 a month in Social Security. “I think they’re cheating her really big,” says Wild Gun’s daughter-in-law, Diana.

Wild Gun is one of approximately 300,000 Native Americans who are suing the Interior Department, claiming that they are owed at least $10 billion in payments on some 10 million acres. The fund is in such disarray, the government concedes, that it doesn’t have any way of knowing how much it actually owes-or to whom. “It’s a total mess,” says Elouise Cobell, the lead plaintiff in the class-action lawsuit. “They’ve stolen from the Indians because we’re minorities and we’re poor. It’s one of the biggest cover-ups in the history of the country.”

Cobell’s harsh assessment is shared by Republican John McCain of Arizona, a member of the Senate Indian Affairs Committee, who calls the fund’s mismanagement a “national scandal,” and by US District Judge Royce Lamberth, who is hearing the case. “I’ve never seen more egregious misconduct by the federal government,” the judge declared. This spring, Lamberth is expected to consider placing the fund in the hands of a court-appointed receiver, a move that would give the judiciary an unprecedented degree of control over an entire federal bureaucracy.

The trust fund proved to be a disaster from the start. To give the government greater control of tribal lands, Congress divided reservations into parcels called “allotments” and awarded them to each member of a tribe-but reserved the authority to manage the property. Anyone who wanted to lease Indian-owned lands made their payments directly to the government, which was then supposed to pass the money along to the Indians who had been allotted the lands. But officials of the Bureau of Indian Affairs often failed to collect lease payments-and when they did, the money didn’t always make its way to Native Americans. As many as 90 percent of the fund’s records may be missing, and the few that are available are in comically bad condition. An Interior Department report provided to the court refers to storage facilities plagued by problems ranging from “poisonous spiders in the vicinity of stored records” to “mixed records strewn throughout the room with heavy rodent activity.”

Federal officials have “spent more than 100 years mismanaging, diverting, and losing money that belongs to Indians,” says John Echohawk of the Native American Rights Fund, which is directing the lawsuit. “They have no idea how much has been collected from the companies that use our land and are unable to provide even a basic, regular statement to most Indian account holders.” In 1999, Judge Lamberth found Interior Secretary Bruce Babbitt and Treasury Secretary Robert Rubin in contempt for failing to produce documents and slapped the government with a $625,000

In December, the judge also ordered the Interior Department to shut down most of its Internet operations after an investigator discovered that the department’s computer system allowed hackers easy access to Indian trust accounts. With the Internet off-limits for weeks, many federal employees could not receive or respond to emails, and thousands of visitors to national parks were unable to make online reservations for campsites. The shutdown also prevented the trust fund from making payments to more than 43,000 Indians, many of whom depend on the quarterly checks to make ends meet. In Montana and Wyoming, some bene

The check delays heightened the frustrations of Native Americans, who have asked Lamberth to take control of the trust fund. In December, a special master appointed by the court issued a 154-page report urging the judge to name an independent receiver to oversee the fund. “Without such direct oversight,” the report concluded, “the threat to records crucial to the welfare of hundreds of thousands of bene

However the current case is resolved, the problem is likely to get even bigger in the coming months. The accounts now under dispute involve only royalties owed to individual Indians; some tribes are expected to file new lawsuits to recoup payments they are owed on 38 million acres of tribal land. Taxpayers have already spent an estimated $800 million to sort out the fund’s records and pay for the government’s court defense. Yet officials appear no closer to making past-due payments. “Right now all they have is a plan to make a plan,” says Keith Harper, an attorney with the Native American Rights Fund. “Our view is, beneficiaries can’t wait that long.”