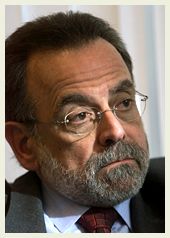 When the Organization for the Prevention of Chemical Weapons was formed in 1997, it was given the sweeping charge of enforcing the international Chemical Weapons Convention, the treaty banning such arms. The man appointed to lead that mission was Jose Bustani, an experienced and widely respected Brazilian diplomat.

On April 22 of this year, Bustani was ousted from that post after an unprecedented (and some say unsupportable) vote orchestrated by the Bush White House. Now, Bustani is saying that the implications of that vote should be clear — and chilling — for anyone committed to true multinational action.

Indeed, US officials have offered little reason for its opposition to Bustani, saying only that they questioned his “management style” and differed with several of Bustani’s decisions. Despite this, Washington waged an unusually public and vocal campaign to unseat Bustani, who had been unanimously reelected to lead the 145-nation body in May, 2000. Finally, at a “special session” called after the US had threatened to cut off all funding for the organization, Bustani was sent packing.

Before the vote, Bustani told delegates that the outcome would “determine whether genuine multilateralism will survive or whether it will be replaced by unilateralism in a multilateral disguise.”

Now, Bustani says he has little faith in the future of multilateralism, especially since Washington has rejected both the Kyoto Protocol on global climate change and the Biological Weapons Convention, and has “unsigned” the pact creating an International Criminal Court.

“It’s obvious that the present administration is not prepared to accept rules that bind America and limit its freedom of action, for the sake of world stability,” Bustani says. “Washington’s refusal to join in such efforts only undermines commitments by other countries to foster common values.”

More immediately, Bustani says he is also concerned about the future of the body he led for nearly five years.

“The new OPCW, after my ousting, is already undergoing radical structural changes, along the lines of the US recipe, which will strike a definitive blow to the post of the Director General, making it once and for all a mere figurehead of a sham international regime,” says Bustani.

Bustani says the first indications of Washington’s displeasure became evident near the end of 2001. While he says US delegates never bothered to expand on their concerns, Bustani traces the shift to the influence of several hawkish officials in the Bush State Department, particularly Undersecretary of State for Arms Control and International Security, John Bolton.

Bolton, who has in the past argued that the U.S. should exit the United Nations, was also one of the administration’s most vocal critics of the International Criminal Court. His staunch opposition to virtually every major recent arms control initiative — including the Anti-Ballistic Missile Treaty, and the Comprehensive Nuclear Test Ban Treaty — and his enthusiastic endorsement of Washington’s problem-plagued Star Wars missile defense system led Ian Williams of Foreign Policy in Focus to argue that putting Bolton in charge of disarmament is akin to letting “a pyromaniac have the run of a fireworks factory.”

Bustani says US delegates and other officials from Washington had become increasingly frustrated by his insistence that the OPCW remain truly independent.

With Bolton’s arrival at the State Department last year, those frustrations suddenly boiled to the surface.

“I therefore fell from grace with Washington,” Bustani says. “And when dealing with people like Bolton, there is no room for dialogue. You just have to go.”

“I was being expected to take orders from the US delegation, and to customize the implementation of the convention to the US demands,” says Bustani from his home in The Hague. “I was expected to consult Washington on every single issue, which I refused to do.”

Bustani suggests US officials were particularly displeased with his attempts to persuade Iraq to sign the chemical weapons treaty, which would have provided for routine and unannounced inspections of Iraqi weapons plants. Of course, the Bush White House has recently cited Iraq’s refusal to allow such inspections as one justification for a new attack on Saddam Hussein’s regime.

“Of course, had Iraq [joined the OPCW], a door would be opened towards the return of inspectors to Bagdad and consequently a viable, peaceful solution to the impasse,” Bustani says. “Is that what Washington wants these days?”

Eric Terzuolo, the permanent US representative to the OPCW, insists that Bustani’s version of events is a “misrepresentation.”

“We would be very happy if Iraq were to join the Chemical Weapons Convention. We believe in the universality of the convention.” However, he says that the OPCW should not be miscontrued as a substitue for existing United Nations weapons inspections efforts.

“This wasn’t a step that the U.S. government wanted to take,” says this official. “We gave Bustani various opportunities to do the right thing. This move — which was approved by Secretary of State Powell and the National Security Council — was not precipitous.”

Under Bustani’s leadership, the OPCW brought 58 new nations into the fold and oversaw the destruction of two-thirds of the world’s chemical weapons facilities. Two years ago, delegates from all 145 member states (including the US) voted to reelect Bustani for a second term. In February 2001, Secretary of State Colin Powell wrote Bustani, praising him for his tireless work.

A little more than a year later, in March of 2002, Bustani survived a US-led motion calling for a vote of no confidence in his leadership. Having failed in that effort, Washington increased the pressure, threatening to cut off funding for the organization — a significant threat given that the US underwrites 22 percent of the total budget. A little more than a month later, Bustani was out.

The US-led measure was actually supported by less than half of the organization’s member states. While 48 nations voted to remove Bustani, 43 states — including France, Indonesia and every South American country other than Brazil — abstained from the vote. Other states didn’t even bother to send delegates.

Only seven member countries — among them Russia, China and Cuba — voted against the US-led measure.

“European Union countries and Eastern European countries aspiring to become members of the EU simply acquiesced to U.S. pressure,” says Bustani. “They wrongly believed that, without US financial support, the OPCW would not survive.” While Brazil and Cuba voted against the US-led effort, Bustani says he believes that Washington pressured other Latin American nations to abstain.

“Washington’s demarches were strong and insistent until all Latin-Americans, except for Cuba and Brazil, eventually agreed to abstain,” he said.

Out of a job, Bustani is awaiting a new assignment from the Brazilian government. Still, he says he has no intention of meekly passing from the international scene.

“I do not intend to give up what I take as a mission, which is to expose the illegality of what just happened in the Hague,” he says.