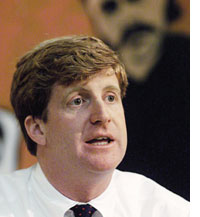 At the same roast, the admitted former cokehead joked about Senator Lincoln Chafee (R-R.I.), another admitted former cokehead: “Now when I hear someone talking about a Rhode Island politician whose father was a senator and who got to Washington on his family name, used cocaine, and wasn’t very smart, I know there is only a 50-50 chance it’s me.”

The Sex in Congress Award

At the height of the Gary Condit imbroglio, Rep. Scott McInnis (R-Colo.) proposed a change in the House ethics manual — forbidding all sex between Congresspersons and interns. “Right now you’re allowed to engage in it,” he said.

Rep. Anthony Weiner (D-N.Y.) was seen partying just days after 9/11 with Diana Davis, a 22-year-old House staffer. The 36-year-old bachelor came on to Davis saying he was an “auto parts salesman.” Later, realizing she’d been misled, Davis emailed Weiner: “I’m assuming that selling auto parts…is only a part-time gig. My apologies if I offended you.” Weiner quickly hit his reply button, writing, “Apologies like yours are best offered in person.”

Rep. Bill Thomas (R-Calif.) was outed for having an affair with Deborah Steelman, a health care lobbyist who routinely had business with Thomas’ health care committee and steered huge campaign gifts to Thomas’ war chest. Steelman, now a vice president for Eli Lilly, did not deny the affair; rather, she was enraged that anyone would think having sex with Thomas gave her undue advantage: “To suggest I would stoop to an ‘inappropriate relationship’ to achieve legislative results is repugnant and sexist.”

Back | And the winner is…