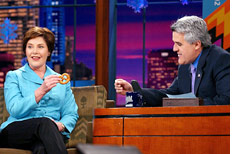 Then, that night, glued to the tube like the rest of the world, waiting to see which new science fiction event was going to unfold, I read one of the news flashes crawling across the bottom of the MSNBC broadcast: “New York City reports no unusual looting.” And I laughed, mumbling to myself, “probably just the normal Tuesday night load.”

Later, Mayor Rudy Giuliani encouraged all New Yorkers to remain calm, “except those who live South of Houston Street.” That’s when the notebook came out. My life was back to semi-normal.

Sure, I read the loud and premature proclamation concerning “the death of irony.” I didn’t even try to muffle my chuckles. Sure, I understand how thousands of blase pundits might assume that America, having been doused by the cold shower of instant vulnerability, would never raise our national taunting to the previous record-setting levels (Mock 7, by the way). Sure, we were told that the ghostly absence of the Twin Towers would stand as a silent rebuke, inducing more chastened and spiritual lives. Sure. I could see that. I could also see David Letterman hosting Pepe Le Pue retrospectives on the Noggin Channel. And Fran Leibowitz working as a waitress at the Time Square Howard Johnson’s.

After all, by that time, I was already getting laughs again.

Laughing at distress diminishes its power to overwhelm. Look at what Charlie Chaplin and the Marx Brothers did to Hitler and Mussolini, cutting an unfathomable foe down to a manageable size, exposing the craziness on which the menace was built. The sad and glorious part is, there is always material, even when there isn’t a bad guy to mock, even when there are only the living and the dead. Reportedly, Lenny Bruce’s first line on stage the night of November 22, 1963, was “Poor Vaughn Meader.”

So, it was obvious right from the beginning that humor was going to be one of the tools that was going to get us through this cataclysmic mess. Yes, blasphemous as it might sound, there were laughs to be unearthed in the debris of the worst disaster in our nation’s history. All we had to do was find them. At first, the search was delicate and difficult, and the rewards were tiny. Death and destruction rendered much of the material too toxic for immediate use. But as President Bush said, “we all have our jobs to do,” and I was determined to fulfill my patriotic duty by rooting out any item from which even the faintest ironic aroma emanated. I found plenty. Still, I worried.

On Sept. 13, I filled in at a San Francisco comedy club for a comic grounded in New York. Just before I hit the stage, I worried. Maybe the crowd came to a comedy club to escape reality, not revel in it. Maybe all they wanted to hear was cute puppy dog material: “women be different than men!” Maybe the audience would be full of rowdy bachelorette parties, drunk off their asses and periodically tottering off to the bathroom (sorry, that last one’s the normal Friday night second show worry).

Surprisingly, the crowd was hipper than anyone had a reasonable right to expect. They weren’t just willing to laugh at the shit storm of madness that had rained down on them. They were poised to laugh. Perched, flexed and buffed. The show was a 50-minute comedic pep rally.

In the best of all worlds, a comic verbalizes what everyone else is thinking. I think that’s what happened. Knowing you’re not alone can be comforting. Those seemingly awful, irreverent snickers in the face of unspeakable horror aren’t just your sick and twisted seeds; they’re everyone’s profane response to horror. It ain’t just you, Bubbie.

Comedy is defiance … a snort of contempt in the face of fear and anxiety. Laughing, we create room for hope to creep back in on the inhale. When the jokes work, the result is a cathartic release. It’s stand-up therapy as much as comedy. Hey, look at me, I’m a nurturer. Mom would have been proud. She always wanted a doctor in the family. The returns of Letterman and Leno were greeted by a grateful nation with tearful relief, as if a long-ailing patient had finally come home.

In the aftermath, the comedic response was defensive and angry. “We’re going to pop those backward fools.” Jokes were made at the expense of Osama bin Laden and his bloodthirsty band of followers, an audible rush filling the vacuum created by the loss of the strangling restrictions of political correctness.

We were mad and the humor as it normally does, reflected the mood of the nation. The jokes were all very, very red, white and bluish. We belittled the motives and heritage of the villains, to a point that racism poked its ugly little turtle head right into the mainstream.

Bush-bashing was put on hold, and not even a hint of a whisper of American culpability would be countenanced, as Bill Maher belatedly discovered. Comedy needs a target. For the lazy or the angry, that aim is often directed at the big, easy target. The slow moving. Thinning of the herd, as it were.

Then, on a fateful Sunday in January, alone on a couch watching football, the President choked on a pretzel and all bets were off. The Dauphin became fair game again. His extended honeymoon had just witnessed an entire place setting of china thrown at the wall.

Of course, I didn’t believe the pretzel bit. Why would his staff let him look that ridiculous, unless what really happened was even more ridiculous — or freaking crazy? My theory: W was taunting his dad about how much better his war was going, and Bar hit him in the head with an empty gin bottle. Just a theory.

So, here we find ourselves in October. The economy sucks, we’re going to war with Iraq and Bush is President. While we weren’t looking, Sherman set the Wayback Machine to 1991. We can only hope this doesn’t also mean we have to live through another whole spate of Pauly Shore movies.

We’re heading for another war — what we perpetually suspicious types would characterize as a very conveniently timed war. But this time around, the national comedic voices aren’t falling into lockstep behind the administration. I doubt those voices will be muffled again. At least not to the degree they were post 911. Cynicism has kicked patriotism out of the house of humor, reclaiming the seat it has held since the height of Vietnam.

Trust me, you will hear no more stentorian decrees from jaded New York writers wearing lots of black about how “irony is dead.” Oh, you might hear “irony is failing at Beth Israel” or “I’m worried about irony, look at how thin she is” or even “Irony, you look like hell. Take a few weeks off, why don’t ya.” But no more death certificates. A return to normalcy is what Bush wanted, and God willing, that’s what he’s getting. With a legion of canaries in the coalmine, mocking and scoffing and taunting. And I’m here to help.