Seen from the highway cutting through Lesotho’s Maloti mountains, Mamolupe Tsalong’s tidy cinderblock house seems just a gray speck below the wide, blue sky and rolling, green-carpeted peaks. It is summer, so Tsalong sits in the shade, cradling her daughter and watching the occasional truck trundle by on the road below. Built to support the construction of a nearby dam, the new highway connects this impoverished hinterland with Lesotho’s capital, Maseru, about a two-hour drive to the west. Tsalong, a 21-year old mother of two, likes the highway. But it is the only part of her new life that she does like.

Tsalong moved to this small house in 1998, after officials from Maseru told her family that they would have to abandon their home and fields in the village of Ha-Ralifate to make way for Mohale Dam, one of three dams built for the massive Lesotho Highlands Water Project. In exchange, she says, the officials promised clean water, new housing, job training, and cash.

Four years have passed, though, and Tsalong says many of those promises haven’t been kept. Compensation came once, in 2000, but Tsalong doesn’t understand why it hasn’t come since. No one she knows has been offered job training. Now, without farmland — a valuable commodity in Lesotho, where only 11 percent of the land is arable but nearly 90 percent of the population still farms — she says she can no longer grow her own food. Ironically, she doesn’t even have access to clean water anymore: she scoops what she needs from a nearby stream, carrying it home in a bucket balanced on her head. Though Tsalong’s husband has found work, the income isn’t enough to support the eight people in the household. Now, dependent on maize handouts, Tsalong worries for the future.

“Life has deteriorated,” she says listlessly. “Before we had land, our fields. Now our fields are gone.”

Tsalong’s story is typical in Lesotho. Roughly 27,000 rural villagers — more than one percent of this tiny mountain kingdom’s total population — have lost their homes, farmland or other assets to the water project, the biggest infrastructure initiative in sub-Saharan Africa. Started in the 1980s at the behest of neighboring South Africa’s white minority regime, the project began life as a World Bank-sponsored scheme to provide water to apartheid-era industries while avoiding international sanctions. Included in the deal was a promise that the mountain people displaced by the dams would be left no worse off than before the massive undertaking began.

Although white rule ended in South Africa in 1994, the dams continued to rise, bringing profound changes to isolated, landlocked Lesotho, which is entirely surrounded by South Africa. The Highlands water project has been a windfall for Maseru; proceeds from the dams account for 14 percent of Lesotho’s Gross Domestic Product. But critics claim few of the benefits have trickled down to Lesotho’s people. The country remains dirt poor, with nearly 43 percent of the population living on less than $1 per day. Despite mountains of scientific studies and millions of dollars invested in high-profile rural development programs, the LHWP has made beggars of displaced Highlands people like Mamolupe Tsalong.

While acknowledging its economic importance, human rights groups say the project’s record — and that of the Lesotho Highlands Development Authority, the quasi-public company that manages it — provides a cautionary tale about the human toll of big water schemes and the limits of development plans, no matter how well-intentioned.

Problems that have dogged the project since its inception remain unsolved, and popular frustration is mounting, notes Jacob Lenka, a fieldworker with the Maseru-based Transformation Resource Center: “‘Give us our due’, is what [people] are saying. You have been saying you will give us our due, but time is going on.” 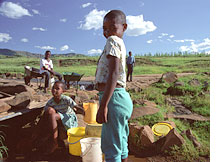 Highlands villagers displaced by the massive water project collect their own water from a stream.

Chief Seipati Mohale, who oversees the district in which Tsalong lives, echoes these sentiments. Originally, the Chief was an enthusiastic backer of the water project. When asked if he still supports the dams, though, he responds angrily.

“They are good in promising, but poor in delivering. People now go to sleep without eating anything. The situation gets worse every year.”

The Highlands have always been Lesotho’s poorest and least-developed region. Until the dams came and the highways were built, the isolated settlements were accessible only by rough dirt roads. But the Highlands were also Lesotho’s bread basket. Much of the country’s richest farmland is found in the deep mountain valleys, and most of the region’s residents depended on the land for their survival. In this context, the dam construction projects were predictably disastrous: according to the International Rivers Network, more than 20,000 acres of irreplaceable fields and pasturelands have disappeared beneath the artificial lakes.

“There is that flipside,” acknowledges Mahlape Mothepu, Deputy General Manager of the development authority’s Environmental and Social Services Group. “The social fabric has been torn. Extended families used to be self-sufficient. In rural communities, newly dependent people are on handouts.”

Still, the water project’s supporters say the price is reasonable. Ted Scudder, a professor at CalTech and former member of an independent LHWP assessment panel, insists that the dams are necessary both for Lesotho, a resource-poor country with little to sell but its water, and for South Africa, which has little water to provide its chronically thirsty cities. While conceding that “the costs are higher than necessary, and certainly much higher than desirable,” Scudder sees the Highland dams as the best available option. Andrew Macoun, the World Bank’s Lesotho Task Manager, argues that the Highlands — hit hard like the rest of Lesotho by mine layoffs in South Africa — would actually be worse off without the dams.

“The question is: What would the situation have been like without the project?” he asks.

Some critics argue that the answer is simple, and not the one Scudder or Macoun would suggest.

“We don’t need the water,” says Patrick Bond, a professor at Johannesburg’s University of Witwatersrand and co-Director of its Municipal Services Project. Noting that half of South Africa’s water is lost to leaky apartheid-era plumbing, with much of the rest going to the pools and gardens of the rich, Bond makes the case for conservation at home. “When we have this huge, expensive dam it’s a disincentive to do anything about the leaks.”

For its part, the development authority admits to many of its mistakes, but dismisses the villagers’ complaints as the whining of isolated malcontents. “Really, there are a few cases where you find out of 10 people complaining, one is genuine,” Mothepu says. In any case, she says the LHDA has made great strides in recent years.

In fact, while some promises — like Tsalong’s squat, gray house — have been honored, the authority clearly has no intention of honoring others. And a recent report from Scudder’s group mixes praise and condemnation.

Tsotang Moeketsi, the authority’s Public Relations Manager, admits that it looks bad when villagers displaced by a water project lack access to clean water. But he sees no injustice in the situation. The water has been paid for by South Africa, and that’s where it’s headed, he says.

“It is not intended for domestic consumption. The government is seriously looking at developing these [water] resources. It could have been done earlier, I guess, but it is something we are looking at.”

To Ryan Hoover, the International Rivers Network’s Africa program manager, the promises were a cynical means to an end: “What it did was pacify a local people and get them to be excited about the scheme and cooperate with LHDA.”

Now, as the years drag on and the reservoirs behind dams continue to fill, many Highlanders have given up hope of the authority following through on its promises. Chief Mohale says he is circulating a petition, but he doubts it will do any good. “LHDA promised to build a high school, a bank and a post office. Do you see these things?”

Outside the Chief’s stone house, small boys play in the rutted dirt road, while idle men sit in front of thatch-roofed huts. Down the road, overlooking the green and gold valley, clusters of tiny homes like the Tsalongs’ bake beneath the sun. It is an arresting view, but nothing in sight suggests a school or a bank in the works.

Shaking his head, Mohale sounds tired. “No, I don’t think we will see those things.”