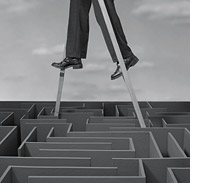 In April, as American tanks approached the outskirts of Baghdad, Pentagon officials suggested that only U.S. companies would be allowed to take part in the postwar reconstruction of Iraq’s oil fields. In strategic leaks to the press, the Defense Department offered a rationale for an American-only policy: European firms, they declared, should be excluded because they do business with Iran and other countries that sponsor terrorist organizations and harbor weapons of mass destruction.

What defense officials failed to note, however, is that many U.S. companies routinely find ways to bypass economic sanctions and export regulations that bar American citizens and companies from trading with Iran, North Korea, Libya, and Sudan. Taking advantage of legal loopholes, these corporations simply conduct their business through offshore subsidiaries that employ only foreign citizens. With no Americans on the payroll, the subsidiaries are free to ignore U.S. sanctions against the “axis of evil” and other countries identified by the Bush administration as the primary sponsors of terrorism. Other U.S. firms — including Hewlett-Packard, Kodak, and Procter & Gamble — ship their products to Dubai, where third parties are known to “re-export” goods to Iran.

“It’s a real problem,” says Michael Beck, an expert on sanctions at the University of Georgia. “American companies bypass U.S. export controls by using entities based in other countries.”

In Iran — “the most active state sponsor of terrorism,” according to the State Department — General Electric is providing four hydroelectric generators to expand a dam on the Kurun River through a Canadian subsidiary called GE Hydro and is also supplying pipeline compressors and gas turbines for Iran’s burgeoning oil sector through an Italian unit called Nuovo Pignone. Not far from the Iraqi border, a subsidiary of Halliburton is helping to build a $228 million fertilizer plant, one of the world’s largest. Another Halliburton division based in Sweden is providing the Iranian National Oil Co. with a $226 million semi-submersible drilling rig, while other subsidiaries operate in Libya. A British subsidiary of ConocoPhillips helped Iran survey its Azadegan oil field, and ExxonMobil only recently sold its Sudanese gas subsidiary based in Khartoum.

U.S. companies acknowledge that they routinely use overseas subsidi- aries to trade with sanctioned countries in the Middle East and else-where. “We have used foreign subsidiaries to sell oil equipment in those regions,” says Scott Amann, a vice president at the oil-service firm Cooper Cameron. “We’re not allowed to have an American company or American operation.”

But while President Bush has drawn a line in the sand with foreign governments, warning them “you are with us or you’re with the terrorists,” he has done little to crack down on U.S. corporations that skirt trade embargoes designed to undercut terrorist organizations. “It is an outrage, if not actually criminal, when you have companies end-running these sanctions,” says Frank Gaffney, a deputy defense secretary under Reagan and president of the Center for Security Policy, a conservative think tank in Washington, D.C.

Previous administrations have been less friendly to sanction dodgers. The Reagan administration pressured subsidiaries of Conoco and Marathon to leave Libya in the 1980s, and in 1995 the Clinton administration persuaded Conoco to abandon an Iranian oil contract arranged through a Dutch subsidiary. “If a government is strongly committed to stopping these kinds of transactions, it can do so,” says Kenneth Rodman, a sanctions expert at Colby College. “There is power that the U.S. is choosing not to use for some reason.”

Instead, the Bush administration has used its power behind the scenes to make it easier for American companies to do business with the very countries it has targeted in the war on terrorism. As CEO of Halliburton, Dick Cheney lobbied to lift U.S. sanctions against Iran and Libya, saying they hurt business and failed to stop terrorism. As vice president, Cheney has initiated a “comprehensive review of sanctions” as part of the National Energy Review, suggesting that sanctions against oil-producing nations should be relaxed to improve “energy security.” Last year the administration supported a bill that would have weakened trade restrictions on high-speed computers and other technology that can be used to develop nuclear weapons, and the Securities and Exchange Commission has delayed issuing rules that would require foreign companies to disclose their business deals in sanctioned countries.

Industry leaders have been lobbying fiercely to further loosen trade barriers. They argue that sanctions against Iran, Libya, Sudan, and other countries limit cultural and economic exchanges that could promote reform. In addition, they say, sanctions give unfair advantage to foreign companies not beholden to U.S. law. “When sanctions are proposed unilaterally, they almost never work — and they end up shooting our guys in the foot,” says William Reinsch of the National Foreign Trade Council, which spent $280,000 lobbying against sanctions in 2001.

But the point, critics say, is not whether sanctions work, but why major corporations are being allowed to sidestep the law. Sanctions enjoy broad, bipartisan support — the most recent version of the Iran-Libya Sanctions Act passed Congress by a vote of 409-6 — and conservative Republicans have been among the most vocal champions of cutting off trade to countries that sponsor terrorist organizations. “By doing business in these countries, you are basically selling the rope that will be used to harm U.S. citizens,” says Rep. Frank Wolf (R-Va.). “It’s fundamentally immoral to me.”

In April, Rep. Henry Waxman (D-Calif.) called on the Pentagon to investigate Halliburton’s business dealings with Iran and Libya, noting that the company also provides support for American military operations. “I think many people will be surprised to learn that a company receiving millions of taxpayer dollars to support the war on terrorism has had business deals with some of the leading state sponsors of terrorism,” Waxman says. “Congress should determine whether companies are complying with the spirit and the letter of U.S. law.”

At the state level, lawmakers and investors have decided to take action themselves. In January, a bill requiring public pension funds to disclose their dealings with sanctioned countries was introduced in Arizona. A month later, officials who manage pensions for public employees in New York City urged shareholders of General Electric, Halliburton, and ConocoPhillips to pass resolutions requiring the companies to disclose their contracts with Iran and Syria, another “state sponsor of terrorism,” saying such trade deals “violate the spirit of the law.”

Proponents of the resolutions say that shareholders have a legitimate stake in the issue: Using offshore subsidiaries to evade sanctions, they note, could hurt a firm’s share prices. “In this climate we are in today, the reputation of a company could be tainted if it is perceived to have ties to states that are connected to terrorism,” explains Kenneth Sylvester, assistant comptroller for New York.

The pressure has had an effect. After initial resistance, Halliburton agreed to reconsider its Iranian business, while Conoco-Phillips agreed to review both Iranian and Syrian operations, avoiding a potentially embarrassing vote by shareholders. For now, though, public pensions are still being invested in companies that do business with sanctioned countries — pensions that include the retirement funds of New York police and firefighters who were killed at the World Trade Center. “You are talking about the sons and daughters and the wives of the people who died on September 11,” says Joe Alejandro, treasurer of New York’s Patrolmen’s Benevolent Association. “They don’t want money going to terrorists.”