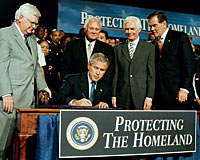 Bush administration officials used to say that the war on terrorism had to be fought “in
Baghdad, not Boston.” You don’t hear that line much anymore, yet it’s clearly
reflected in the administration’s spending priorities. The war in Iraq so far has cost $150
billion; for the Department of Homeland Security, the administration has allocated $27 billion
this year, with the bulk of that going to the routine operations of agencies like the Customs Service.
When it comes to new programs to make planes, trains, ports, and urban centers safer, there’s
precious little left over—which is why a range of critics, from local firefighters to Republican
members of Congress, have lambasted Bush for shortchanging the nation’s true homeland security
needs. Below, a sample of those needs, along with Bush’s budget allocations, compared with
the time it takes to burn through the same amount in Iraq.