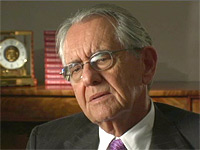 My name is Pete Peterson. I’m the cofounder and chairman of the Blackstone Group, I chair the Council on Foreign Relations. I’ve just stepped down as chairman of the Federal Reserve Bank in New York.

I joined the Nixon administration in January of 1971. I was his international economic advisor. Some people called me “an economic Kissinger.” I don’t know what I was. And then I moved over to the Commerce Department, as Secretary of Commerce.

In my book [Running on Empty] I offend everyone, including the Democrats, but you asked about the Republicans. [What does it mean to be a Republican?] Well, I know what it used to mean, it used to be a party that was oriented toward the longer term, and less “i want it all, and I want it now.” A party that was international, certainly. But those were some of the values I was drawn to, but most importantly it was long-term fiscal responsibility.

You have tax cuts, and we’ve become theological about tax cuts. You know, faith directe, more or less untouched by analysis, history, or evidence. And it’s morphed into, “Any tax cut, any time.” But a long-term tax cut is not a tax cut at all, unless it’s accompanied by long-term spending cuts. It’s what you’d call a deferred tax increase on the future, which is our children.

What is most upsetting to me is that during the Democratic, Clinton years, there was this bipartisan cooperation, to raise taxes on people like me, and to put caps on spending, and we had something called the “Pay as you go” rule. So if you proposed a tax cut it had to be met with a spending cut. Well, my party got rid of all those spending restraints. And this president, oddly enough, who says he’s a conservative, is the first president since John Quincy Adams not to veto a single bill. So if he was offended by any of this spending he had plenty of opportunities to make it difficult.

This isn’t just Pete Peterson saying this, you know, the aging curmudgeon. The Cato Institute refers to the “spending explosion.” And Dick Armey, who’s hardly a liberal — who used to be the House Majority Leader — says we can’t pin this one on the Democrats. We’re in charge of the White House and the Congress.

So we become a new oxymoron: the Big Government conservative. So my party has, in a sense, lost its moorings in recent years.

He [George W. Bush]’s a charming person. There were about a dozen of us, largely fat cats from Wall Street, and I said, “Well, sir, if you’re elected president, there’s a moral issue and a philosophical issue.” And he said, “What’s this moral point?” And I told him about the German theologian, Bonhoeffer, who said that the ultimate test of a moral society is the kind of world it leaves to its children. And I said, “Sir, as I look at these fat cats around this table, I wonder about the morality of what we’re doing here — because while we’re getting tax cuts, our kids are going to get huge tax increases, because of our largesse.

Well, you could see that I’d hit him in the solar plexus, or somewhere else, and I said, “I don’t think tax cuts are immoral.” He was somewhat shaken or irritated by my comment. And I said, “Sir, I didn’t say tax cuts were immoral. I said tax cuts for people like us, before you’ve solved the costs you’re going to be passing on to your kids, is in my judgment immoral. But you could just tell by his steely response that tax cuts are part of the theology.

If you don’t match the tax cuts with spending cuts, it’s just a deferred tax increase. And it’s on our kids, because you’re in effect trading a tax cut now for a tax increase later, on kids that had nothing to do with this decision.

And, oh, by the way. A third of the people reach age 65 and they have no net financial savings at all. The bottom 20 percent of the elderly, the poor segment, depend on social security for 91 percent of their total cash income, and you’re going to announce one day, “Sorry folks, there’s no money.”

One of the almost criminal things we did, we took all our kids surpluses and we spent them. We spent them on programs that had nothing to do with Social Security. And now that money’s already been spent.

I think there is a correlation here between running these debets and whether you’re going to be able to meet your critical obligations. This country has not faced the trade-offs between national security and economic security, retirement security, global economic development security, and human capital needs in this country. And we’re going to have to confront that.

I say to my kids and their friends, “Hey, kids, it’s your future, not mine. I’m in great shape myself. And are you going to take responsibility for your future and get out there and get involved in the political process, get educated? I was delighted to read that more young people were getting registered. I sure hope so — however they vote.