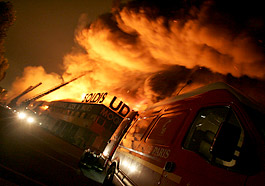 Americans should be very concerned about the violence that has swept across France the last two weeks. The riots, and the deeper problems they have laid bare, are a microcosm of the larger struggles of Muslims across the Muslim-majority world to integrate into a globalized order from which they have been marginalized for decades, even centuries.

While unusual in their scope, the riots are in not unprecedented. A similar “intifada of the cities” broke out fifteen years ago in response to the same conditions in the banlieues, or suburban ghettos, where a lack of educational and employment opportunities, and dismal housing conditions created, in the words of then Paris Mayor Jacques Chirac, a “reign of soft terror” that left young people with little choice but “to revolt.”

The state could maintain its policy of trying to maintain order while band-aiding the endemic problems they reflected, “but until when?”

We now know the answer. Days after Interior Minister Nicolas Sarkozy announced a “war without mercy” against crime in France’s ghettos, two young Muslim teenagers were electrocuted while hiding in a power substation from police October 27, sparking the violence of the last two weeks. They hid in such a dangerous place precisely to escape a police force–and a state–that has long viewed most poor Africans and Muslims as the kind of “criminals and other troublemakers” upon whom Sarkozy had declared war.

Now that he’s President, Chirac can no longer speak of the terror caused by government policies and societal neglect. Instead he argues that “the Republic is completely determined to be stronger than those who want to sow violence or fear.” Similarly, Prime Minister de Villepin argues that “order and justice will be the final word in our country.”

What both men cannot acknowledge is that in the banlieues, the “Republic” can be the very source of the violence and fear its leaders are now trying to overcome. As Chirac once understood, the young rioters cannot be blamed for concluding that when “justice” and “order” are incompatible, the only way to achieve the former is to bring disorder to the Republic as a whole. Indeed, after a week and a half of violence the government decided to “restore” and even increase funds for much-needed reconstruction, education and similar projects.

Naturally, the violence has led French commentators to argue that it reflects a failure of the “French Republican model” to live up to its promise of full equality for all citizens. Yet few have recognized the deep historical roots of this failure, or its global repercussions.

On the one hand, the Republican ideal that should provide for the assimilation and integration of all French citizens evolved through and was nurtured by centuries of often brutal French rule in Africa, and later the Middle East. The racism and exploitation that were fundamental to the functioning of the French empire “d’outre mer” (“across the sea”) did not melt away at the borders of the motherland. Instead, they became endemic to French political culture, poisoning attempts to assimilate the hundreds of thousands, and now millions, of former subjects who migrated to France to find the low-wage jobs their own economies could not provide.

The children of these workers are now dismantling the edifices of France’s “Fifth Republic,” itself established in the ashes of a dying empire after World War Two.

But French Republicanism is under attack not only from within. Today the forces of globalization demand that the French State, the symbol of the Republic’s commitment to all its citizens, withdraw its safety net, leaving them to struggle increasingly on their own against the vagaries of a market that cares little about the principles of “liberté, egalité, fraternité.” And it is here that the struggles in the long-abandoned banlieues intersect with the struggles of Muslim countries to integrate into a global system that for centuries has been predicated on their marginalization.

Indeed, just the threat of exposure to the economic logic that has long defined French immigrant life led one million French citizens to take to the streets last month in nation-wide protests against the “neoliberal policies” of the recently reshuffled government. Standing on the Boulevard Beaumarchais watching hundreds of thousands of workers march past, I was struck by how few of them had come from the banlieues, whose African or Arab residents have long born the brunt of the economic restructuring against which the marchers were protesting.

This points to the third problem behind the violence: the French Left, which sees itself as the protectors of the highest ideals of the Republic, has largely failed to engage the poor minority communities who have long been excluded from the benefits of the celebrated “French economic model.” Instead, leading Leftists have attacked Muslims who’ve dared to point out the gap between their rhetoric and actions for being “not Republican” and therefore “not one of us” Like the government, the Left is unable to recognize that it is the Republic that has made it impossible for Muslims to be “one of them.”

Ultimately, the violence in France reflects a larger struggle between a “Euro-Islam” that is well-integrated into a globalized European Union, and a “ghetto Islam” that sees little hope for such a future, turning instead to a closed and increasingly violent form of identity to resist a system that excludes, or at best exploits, the majority of them. In a nutshell, this is the struggle facing over one billion Muslims in the age of globalization.