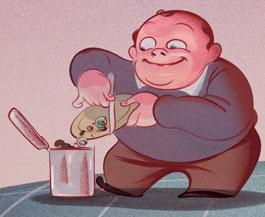 2 IN 3 American households say they give to charity, at an average of $1,262 a year. But only 1 in 3 households report charitable deductions to the IRS.

IN 2002, Americans deducted $654 million for cars they donated to charity—7 times what the cars were actually worth.

ON AVERAGE, Americans think that 24% of the federal budget goes toward foreign aid. Only 0.9% actually does.

FOUR YEARS after Bush founded the Millennium Challenge Corporation to reward Africa’s best-run countries and pledged to fund it by $5 billion a year, the MCC has disbursed only 1% of that amount.

ASKED HOW they would change President Bush’s budget, Republicans would reduce foreign aid by an average of $2.6 billion. Democrats would increase it by $7.7 billion.

BECAUSE AID agencies are forced to buy from U.S. companies at inflated prices, historically America has effectively taken back 70% of the aid it donated.

LAST FALL, the U.N. requested aid for Niger and got almost no response. At that time, $1 per day per person would have solved Niger’s food crisis. Now $80 is needed.

THE AVERAGE American family throws away 14% of its food. 1 in 9 families are never sure they’ll have enough to eat.

A TYPICAL AMERICAN child receives 70 new toys a year, most of them at Christmas.

AMERICANS SPEND $8 billion on Christmas decorations, almost 4 times what they give to protect animals and the environment.

A MINNESOTA company has made $758,000 selling “His Essence”—a candle that smells the way the Bible says Jesus will upon his return (myrrh, aloe, and cassia).

IF THE ESTATE TAX is repealed, charities stand to lose about $10 billion a year.

2 IN 5 CHARITIES have a donor confidentiality policy. Nonprofits make up to $940 million selling their donor lists.

52% OF INDIVIDUAL giving goes to religious institutions. Schools get 7%.

GIFT BAGS for Academy Award presenters contained $100,000 worth of freebies.

JOHN TRAVOLTA piloted his 707 filled with 5 tons of food and 450 tetanus doses to New Orleans, where he met fellow Scientologists providing “therapy” to Katrina victims.

CARNIVAL CRUISE Lines charged the U.S. government at least twice as much per week to house Katrina victims than it charges passengers for a weeklong Caribbean cruise.

18 HOURS after the 1906 San Francisco earthquake, the first trainload of relief supplies arrived. Within a week, nearly every military tent was pitched in the city. Within three weeks, 10% of the Army was on hand.

FEMA’S WEBSITE listed Operation Blessing, Pat Robertson’s faith-based organization, second on its list of charities that would speed relief to

LAST YEAR, Operation Blessing gave half its donations—$885,000—to the Christian Broadcasting Network, of which Robertson is chairman.

LAST JANUARY, RNC chair Ken Mehlman asked each supporter for at least $25 to help get Bush’s message “past the liberal media filter.”

The 1984 Band Aid charity single “Do They Know It’s Christmas?” called Ethiopia a land where “no rain or rivers flow.”Actually, Ethiopia is the source of the Nile and 40% of Ethiopians are Christians.