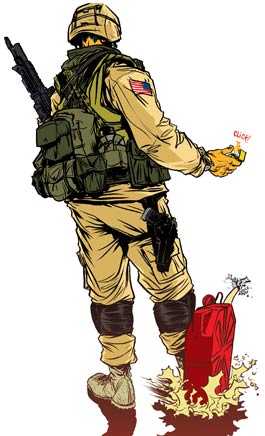 After piercing the ankle tendons of Hector’s corpse, lashing the feet with rawhide, and dragging the Trojan hero around behind a chariot, Achilles, beloved of the gods, had Zeus and most of fractious Olympus to remind him that desecration of the dead offends heaven and earth. The American soldier has only Subsection 504 of Chapter 8, Section II, of the Army’s FM 27-10, also known as the Law of Land Warfare, a less powerful guide, to be sure. No immortal emissary flies to him in his rage, and if he even remembers his brief training in the rules of war and international law, it was long ago, the text left back home in a basement somewhere, among the things of decent life to be picked up again later, after the horror.

The law is plain: In addition to the “grave breaches” of the Geneva Conventions of 1949, the following acts are representative of violations of the law of war (“war crimes”): … c. Maltreatment of dead bodies.

On the face of it this seems elementary, training in one of those things that’s unnecessary until a lawyer brandishes the lack thereof after soldiers get caught. They almost never do get caught. Desecration of the dead is common to every war. Human rights monitors, military commanders, and civilian political leaders were aghast last October when this particular war crime joined the list of documented atrocities committed by Americans in the Global War on Terror, but it was only a matter of time.

On October 1, 2005, members of the 1st Battalion, 508th Infantry Regiment of the 173rd Airborne Brigade operating in southern Afghanistan burned the bodies of two Taliban fighters who’d been killed the day before in a firefight that also claimed one U.S. and one Afghan soldier. The Taliban bodies had been placed facing Mecca, as is Islamic custom, though cremation defiles that same custom. The soldiers, who’d just completed a fruitless search for Taliban whom they believed were hiding in the village of Gonbaz, seem not to have thought they were doing something wrong. They told SBS Television of Australia, which filmed the scene, that they were burning the bodies for “hygiene purposes,” though that is not standard military procedure and, as SBS reporter John Martinkus stated, “Out here, far away from the village, this appears to make no sense.”

Not much does in war. On camera, a soldier witness to the burning said, “Wow, look at the blood coming out of the mouth on that one, fucking straight death metal.”

Meanwhile, Sergeant Jim Baker of a psychological operations (PSYOP) unit attached to the brigade that burned the bodies was broadcasting over a loudspeaker to the villagers below: “Attention, Taliban, you are all cowardly dogs. You allowed your fighters to be laid down facing west and burned. You are too scared to come down and retrieve their bodies. This just proves you are the ladyboys we always believed you to be.” A second soldier taunted various mullahs by name: “You attack and run away like women…. Come and fight like men.”

Both soldiers made those announcements in Pashto, the dominant language of this part of Afghanistan. They read the jeers out of a notebook and helpfully translated the messages into English for the SBS team, which was riding with them as “embeds.”

At some point in their training Baker and the other PSYOP soldier would have read the rules governing their activities, as contained in FM 33-1, the Army’s psychological operations doctrinal manual: Some PSYOP capabilities include…exploiting ethnic, cultural, religious, or economic differences…. Effective PSYOP require imaginative personnel who know the target audience’s language. These personnel must also understand its political, economic, cultural, social, and ideological conditions…. Various laws of war constrain the actions of the United States in conflict. FM 27-10 sets forth the laws of war…. All PSYOP must have a sound legal basis.

The manual devotes several pages to the sources for that legal basis in international, domestic, and military laws and policies, but a few pages after the de facto disclaimers, it advises: Only the supported unit’s limitations in performing the action and the PSYOP planner’s imagination restrict the variety of psychological actions.

Imagination is surely a wonderful thing, so its varieties may be left safely undetailed in the manual, prepared by the U.S. Army John F. Kennedy Special Warfare Center and School at Fort Bragg, a roost for second-rate shrinks and certifiable dark-siders, men who’ve made careers formulating uses for the ugliness of human nature, some of whom disappeared into Afghanistan and elsewhere with Special Forces after 9/11 as part of the Pentagon’s secret “black” operations for capturing, interrogating, or killing suspected terrorists. Sergeant Baker and his PSYOP unit, reservists from Arkansas, with their loudspeakers, “ladyboy” taunts, and Humvee blaring Fleetwood Mac—one can almost see the Taliban, maddened to beard-plucking by the incessant springiness of “Don’t Stop Thinking About Tomorrow”—aren’t in the same league as the dark-siders. For starters, they got caught. No sooner had pictures of the burning corpses and audio of their announcements been broadcast than the Pentagon ordered a criminal investigation. In May 2004, Seymour Hersh exposed the black “special-access programs,” their migration to Iraq, and connection to the prisoner-abuse scandal then roiling the nation; as of this writing their author, Donald Rumsfeld, still has his job, and their practitioners remain, as intended, nameless, untraceable, unprosecuted.

Human Rights Watch deputy director Sam Zarifi told me the swift condemnations of the October atrocity from the commander of U.S. forces in Afghanistan, Lt. General Karl W. Eikenberry, reflected the particularly egregious nature of an act that flouts all law and custom, for all time, in every culture, even the twisted one of Guantanamo, where the Americans have specified “degrading treatment of a dead body” among the possible crimes for which detainees there may be tried before military tribunals. If the low standards to which justice was held before the wars did not already do it, the pantomime of legal procedure in a setting as illegitimate as Guantanamo should confirm that we have passed the point where law, as a rational, impartial, and standardized application of agreed-upon codes of conduct, has any meaning.

Imagine you are a soldier with the unit overlooking Gonbaz. You learned in a brief course once about the Geneva Conventions, but you are in Afghanistan, where official U.S. policy is that the conventions don’t apply. Perhaps without the specifics, you know how Delta Force and other Special Forces operated in the country, because everyone in the military knows. “Grab whom you must. Do what you want,” a former intelligence officer succinctly described the rules to Hersh. Before this you were in Iraq, where you saw all kinds of shit that nobody was punished for. Maybe you remember that FM 27-10, which does apply, provides that protected persons, i.e., the civilian population and detainees, “are entitled, in all circumstances, to respect” of their persons, families, religion, and customs, but you have also learned from superiors obsessed with The Arab Mind that sexual humiliation is very effective when dealing with recalcitrant Arab men, which is another way of saying what the average American boy learns from childhood: if you want to get to a guy, call him weak, womanish, queer.

Just before the burning and the taunting, members of the 173rd were doing house-to-house searches in Gonbaz, terrifying families, terrifying an old man in a mosque. You’ve witnessed or participated in more of those operations than you can count. You probably don’t know you’re supposed to have a warrant, which is laughable anyway. FM 27-10 says, “No physical or moral coercion shall be exercised against protected persons, in particular to obtain information.” No one you’re riding with probably remembers that, because just a moment ago there was one of the brigade soldiers being filmed for television telling an Afghan, “If you can give us that information, you will be doing a lot to help the people around here who are innocent and shouldn’t be arrested…because we don’t want to end up having to punish everyone.” If anyone did remember the rule, you think they’d say? The laws of war prohibit collective punishment. The Uniform Code of Military Justice (UCMJ) prohibits unlawful detention, but civilians are arrested in searches all the time, and you know about Guantanamo. Maybe the soldier was lying to the guy, and what you do recall is that FM 27-10 is kind of loose on deception. “Absolute good faith with the enemy must be observed,” it declares, but then ticks off the circumstances where good faith is not absolute at all and deception is legit. If you’re PSYOP, deception’s the name of the game. Come to think of it, FM 27-10 is pretty contradictory, which is maybe why you don’t remember it so well. “Every violation of the law of war is a war crime,” it says. Check, check, check. But farther on: “The United States normally punishes war crimes as such only if they are committed by enemy nationals.” There’s still the UCMJ, but you’re in the heat on a cliff with stinking bodies in Afghanistan, where Americans have taken more hits in the last few months than at any time since 2001. Burn the fuckers; see if we can smoke out these girly men.

Claims to helpfulness or hygiene notwithstanding, the mean truth is that the troops, mustered into a criminal enterprise, cannot but be criminals. For most of them, those who aren’t sadists, bullies, and dark-siders, it is not so much their fault as their condition. Those in the antiwar camp who raise the slogan “Support the Troops,” believing they have cleverly stolen their opponents’ fire, condescend to all those returning soldiers who know they’ve tasted evil. Their mothers and fathers, lovers and friends must support them, in the intimate and best sense of the word. But politics defines “support” differently, and to pretend otherwise is to contribute further to the corruption of language and the cultural rot where nothing need mean what it says. So, Save the Troops. Spare the Troops. By all means, Bring the Troops Home. But to Support the Troops, as those who’ve made their peace with militarism are clear on, is to support their work, and their work is insupportable.