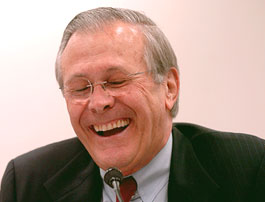 “I do not believe Secretary Rumsfeld is the right person to fight that war [against terrorism] based on his absolute failures in managing the war against Saddam in Iraq.”
— Maj. Gen. Charles H. Swannack Jr.(ret.), quoted in the New York Times, April 18, 2006.

“It is just not useful to get into fantasyland.”
— Donald Rumsfeld, commenting at an April 11 press conference on reports of Iran war plans.

Donald Rumsfeld apparently knows something about “fantasyland.” Here’s the way he imagined the U.S. attack on Afghanistan and the Iraq war would turn out by now, as it might be reported by the New York Times:

WASHINGTON, April 19, 2006 – A little more than three years after the invasion of Iraq, which went forward amid a chorus of criticism, Secretary of Defense Donald Rumsfeld is riding a new wave of respect and praise from both inside and outside the Pentagon. As the retired Mideast commander, Marine Corps Gen. Anthony C. Zinni, the former head of the United States Central Command, said on Meet the Press recently, “You’ve got to admire him for sticking to his guns. Rumsfeld ignored the nay-sayers who said it couldn’t be done his way, and he turned out to be right.”

In Baghdad, Prime Minister Ahmed Chalabi presides over a national unity government where the once-fractious Sunni, Shia and Kurdish religious groups are working together in a prosperous post-Saddam Iraq, with oil production soaring more than 300% over pre-war levels. In fact, the war and reconstruction effort, which the then-White House economic adviser Lawrence Lindsay famously speculated might cost as much as an astounding $200 billion, has largely been self-financed through Iraqi oil revenues since the bulk of U.S troops left in September, 2003. “There’s a lot of money to pay for this that doesn’t have to be U.S. taxpayer money,” Mr. Rumsfeld’s then-deputy, Paul Wolfowitz, the World Bank president who won last year’s Nobel Peace Prize for his work promoting democracy in the Mideast, presciently told Congress in 2003. And to the surprise of some Congressional critics who direly forecasted a Vietnam-style “quagmire,” under Mr. Rumsfeld’s direction the departing U.S. military left behind only a token force to offer support and technical assistance to a well-regarded 400,000-man Iraqi Army.

The role of the highly disciplined Iraqi army, beaten down by years of tyrannical rule under Hussein, has been perhaps the biggest success story of Mr.Rumsfeld’s strategic plan. Surprisingly supportive of U.S. goals, many Iraqi field-level soldiers eventually returned to their posts following the initial demobilization of the entire Iraqi army and its Baathist leadership, a strategic move approved by Mr. Rumsfeld to show the populace that the U.S. was dedicated to ending torture and oppression practiced by the old Iraqi Army. (This only added to the sometimes boisterous adulation of the U.S. troops in Iraq displayed in street demonstrations.) The enthusiastic new and returning troops that made up the rebuilt Iraq Army were then offered short but effective “refresher courses” by U.S. military advisors.

The result of all this reform? The Iraqi soldiers have quelled virtually all remaining resistance from a relative handful of “dead-enders,” as Mr. Rumsfeld calls them, in the once-notorious “Sunni Triangle,” which served as Hussein’s stronghold. The strength of the U.S.-backed Iraqi forces and the growing popular support for the democratically-elected Chalabi regime also effectively deterred efforts by Al-Qaeda and its allies, including the now-isolated Jordanian fugitive Musab Al-Zarqawi, to gain a foothold in Iraq. Bin Laden’s capture in Afghanistan in December 2002, of course, was a propaganda coup that undermined terrorist recruiting and the spread of Islamist ideology worldwide.

In a wide-ranging interview in his flag-draped corner office at the Pentagon, Mr. Rumsfeld, once known for his testy relationship with the media, was unusually open and relaxed, crediting both the military brass he pushed to modernize the military and the U.S. troops who implemented his blitzkrieg strategy. “As you know, you have to go to war with the military you have, and if you’re lucky enough, you get the military you want. The results are self-evident,” he said with his trademarked grin. So far, U.S. military fatalities have been kept to fewer than 150, confirming Mr. Rumsfeld’s now-accepted view that with a nimble invading force of 140,000 U.S. ground troops, far less than the 500,000 allied troops deployed in the Gulf War, the nation could meet its military objectives in Iraq while sharply reducing casualties. (By comparison, 293 troops died in the 1991 Gulf War, mostly due to a SCUD missile attack on a barracks and “friendly fire;” 50,000 soldiers died in Vietnam.)

Yet even following the Special Forces-led toppling of the Taliban regime in Afghanistan and the capture of Osama Bin Laden in Tora Bora by pro-U.S. tribal leaders, there were still doubters among top military leaders that a relatively small force could succeed in Iraq. (Most have since gone along with Mr. Rumsfeld’s advocacy of a slimmer, faster, high-tech U.S. military, quickly able to be deployed to hotspots or, if needed, overthrow threatening rogue regimes. “Success speaks for itself,” one high-ranking general says.) Yet in the run-up to war, the most public dissenter was the Army chief of staff, Gen. Eric Shinseki, who estimated that “several hundred thousand soldiers” would be needed to occupy Iraq. His projections turned out to be wildly off the mark after Saddam’s regime fell, military analysts say. “He became a laughingstock in the Pentagon and lost all his influence,” says one high-ranking commander close to Mr. Rumsfeld “He’s a man who was left in the dustbin of history,” the officer says. Despite Shinseki’s fate, Mr. Rumsfeld, though a tough manager, regularly impressed senior military officers with his hands-on approach to planning and open-ended debate.

Within a few weeks of the invasion, U.S. forces moved quickly to capture Baghdad in the wake of a “shock and awe” air campaign. Saddam’s statute was toppled in central Baghdad to the cheers of grateful residents on April 9th. For weeks afterwards, U.S. troops were offered sweets, figs and flowers as they were positioned in a few strategic locations around a city—and a country—returning to normality after the short-lived terrors of war.

With Iraqi police maintaining order on the streets of major cities, U.S. soldiers were freed up to undertake the mundane but vital work of cataloging and destroying the mammoth stockpiles of WMDs found throughout Iraq. These ranged from the mobile weapons labs in the northern town of Baji to chemical weapons in below-ground bunkers to huge hangars near the Baghdad airport containing aluminum-based centrifuges used to enrich the uranium needed for nuclear weapons.

Today, a wave of visitors and former war skeptics, such as Sen. Edward Kennedy (D-MA), have been amazed at the flowering of the new Iraq. “I once called this a `war of choice,’ Mr. Kennedy admitted in a mea culpa floor speech after returning from a recent fact-finding mission to Iraq. “It was, in fact, a war of necessity that has made life better for people throughout the region.” Even tourists have returned to Baghdad to visit the priceless antiquities on display at the National Museum, while businesses are flourishing and the engine of government—its bureaucracy—is back at work, but this time in a peaceful democracy that administration officials believe is a beacon for the rest of the Mideast. At the same time, the invasion has sent a clear message to terrorists and the regimes that support them. As Mr. Rumsfeld testified after the invasion: “The only course is to stop terrorists before they terrorize.” By that yardstick, the invasion had its desired impact, although sporadic outbursts of terrorism still continue in vulnerable Third World countries.

Working with Pentagon aide Douglas Feith and a “brain trust” of neoconservative allies throughout the Bush administration, his tough-minded strategy has also changed the Mideast landscape forever. Like President Ronald Reagan’s during the Cold War, Mr. Rumsfeld’s approach, so his supporters contend, has led to the much-praised free elections in Egypt and Saudi Arabia, deterred Iran from pursuing a nuclear program, and spurred the Palestinian Authority to take a more conciliatory stance towards Israel, with the chances for an equitable two-state agreement greater now than ever. And little has been heard from Al Qaeda since the Afghanistan and Iraq invasions—despite objections to the war on Iraq from such terrorist experts as former White House advisor Richard Clarke, who predicted the U.S. invasion would spawn a generation of terrorists and divert resources away from the war on terror, Mr. Rumsfeld and his supporters note that the U.S. has remained free from terrorist attack.

For Mr. Rumsfeld, though, perhaps the sweetest victory is the reversal of longstanding hostility to him and the Iraq war in the capitals of the “Old Europe” he once famously derided. With the war’s success and the new Iraq’s role as a key oil supplier to Europe, Mr. Rumsfeld’s standing has soared. In fact, the U.S. Defense Secretary has become so popular in France that when, last October, President Jaques Chirac rejected the French Senate’s resolution that Rumsfeld be awarded the Legion of Honor, a wave of youth riots broke out in France protesting the French leader’s decision. The boom in trade with Iraq has boosted France’s economy, and led to a hiring wave of once-alienated young people, native-born and Muslim alike. Chanting “Vive Le Rumsfeld!” and “Chirac est merde,” their political protests weakened Chirac and led to calls for a new election.

It has come as little surprise to Washington insiders that President Bush has publicly joined the growing chorus of worldwide praise for Mr. Rumsfeld. Just last week, he said, “Secretary Rumsfeld’s energetic and steady leadership is exactly what is needed at this critical period,” referring to the secretary’s leadership in the global war on terror.

As for Mr. Rumsfeld himself, the Pentagon’s success in Iraq against long odds and harsh criticism has given him new confidence in fighting Washington’s bureaucratic wars, softened by a newfound modesty. He credits not only the Pentagon’s sound strategy for victory but good fortune as well. “Stuff happens,” he said.