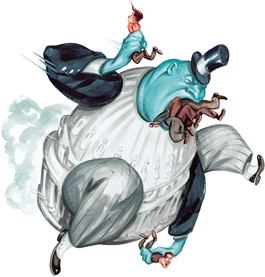 WHAT IS THE REAL NATURE of American capitalism today? Is it a grand national adventure, as politicians and textbooks aver, in which markets provide the framework for benign competition, from which emerges the greatest good for the greatest number? Or is it the domain of class struggle, even a “global class war,” as the title of Jeff Faux’s new book would have it, in which the “party of Davos” outmaneuvers the remnants of the organized working class?

The doctrines of the “law and economics” movement, now ascendant in our courts, hold that if people are rational, if markets can be “contested,” if memory is good and information adequate, then firms will adhere on their own to norms of honorable conduct. Any public presence in the economy undermines this. Even insurance—whether deposit insurance or Social Security—is perverse, for it encourages irresponsible risktaking. Banks will lend to bad clients, workers will “live for today,” companies will speculate with their pension funds; the movement has even argued that seat belts foster reckless driving. Insurance, in other words, creates a “moral hazard” for which “market discipline” is the cure; all works for the best when thought and planning do not interfere. It’s a strange vision, and if we weren’t governed by people like John Roberts and Sam Alito, who pretend to believe it, it would scarcely be worth our attention.

The idea of class struggle goes back a long way; perhaps it really is “the history of all hitherto existing society,” as Marx and Engels famously declared. But if the world is ruled by a monied elite, then to what extent do middle-class working Americans compose part of the global proletariat? The honest answer can only be: not much. The political decline of the left surely flows in part from rhetoric that no longer matches experience; for the most part, American voters do not live on the Malthusian margin. Dollars command the world’s goods, rupees do not; membership in the dollar economy makes every working American, to some degree, complicit in the capitalist class.

In the mixed-economy America I grew up in, there existed a post-capitalist, post-Marxian vision of middle-class identity. It consisted of shared assets and entitlements, of which the bedrock was public education, access to college, good housing, full employment at living wages, Medicare, and Social Security. These programs, publicly provided, financed, or guaranteed, had softened the rough edges of Great Depression capitalism, rewarding the sacrifices that won the Second World War. They also showcased America, demonstrating to those behind the Iron Curtain that regulated capitalism could yield prosperity far beyond the capacities of state planning. (This, and not the arms race, ultimately brought down the Soviet empire.) These middle-class institutions survive in America today, but they are frayed and tattered from constant attack. And the division between those included and those excluded is large and obvious to all.

Today, the signature of modern American capitalism is neither benign competition, nor class struggle, nor an inclusive middle-class utopia. Instead, predation has become the dominant feature—a system wherein the rich have come to feast on decaying systems built for the middle class. The predatory class is not the whole of the wealthy; it may be opposed by many others of similar wealth. But it is the defining feature, the leading force. And its agents are in full control of the government under which we live.

Our rulers deliver favors to their clients. These range from Native American casino operators, to Appalachian coal companies, to Saipan sweatshop operators, to the would-be oil field operators of Iraq. They include the misanthropes who led the campaign to abolish the estate tax; Charles Schwab, who suggested the dividend tax cut of 2003; the “Benedict Arnold” companies who move their taxable income offshore; and the financial institutions behind last year’s bankruptcy bill. Everywhere you look, public decisions yield gains to specific private entities.

For in a predatory regime, nothing is done for public reasons. Indeed, the men in charge do not recognize that “public purposes” exist. They have friends, and enemies, and as for the rest—we’re the prey. Hurricane Katrina illustrated this perfectly, as Halliburton scooped up contracts and Bush hamstrung Kathleen Blanco, the Democratic governor of Louisiana. The population of New Orleans was, at best, an afterthought; once dispersed, it was quickly forgotten.

The predator-prey model explains some things that other models cannot: in particular, cycles of prosperity and depression. Growth among the prey stimulates predation. The two populations grow together at first, but when the balance of power shifts toward the predators (through rising interest rates, utility rates, oil prices, or embezzlement), both can crash abruptly. When they do, it takes a long time for either to recover.

The predatory model can also help us understand why many rich people have come to hate the Bush administration. For predation is the enemy of honest business. In a world where the winners are all connected, it’s not only the prey who lose out. It’s everyone who hasn’t licked the appropriate boots. Predatory regimes are like protection rackets: powerful and feared, but neither loved nor respected. They do not enjoy a broad political base.

In a predatory economy, the rules imagined by the law and economics crowd don’t apply. There’s no market discipline. Predators compete not by following the rules but by breaking them. They take the business-school view of law: Rules are not designed to guide behavior but laid down to define the limits of unpunished conduct. Once one gets close to the line, stepping over it is easy. A predatory economy is criminogenic: It fosters and rewards criminal behavior.

Why don’t markets provide the discipline? Why don’t “reputation effects” secure good behavior? Economists have been slow to answer these questions, but now we have a full-blown theory in a book by my colleague William K. Black, The Best Way to Rob a Bank Is to Own One. Black was the lawyer/whistle-blower in the Savings and Loan and Keating Five scandals; he later took a degree in criminology. His theory of “control fraud” addresses the situation in which the leader of an organization uses his company as a “weapon” of fraud and a “shield” against prosecution—a situation with which law and economics cannot cope.

For instance, law and economics argues that top accounting firms will protect their own reputations by ferreting out fraud in their clients. But, as with Enron, Tyco, and WorldCom, at every major S&L control fraud was protected by clean audits from top accountants: You hire the top firm to get the clean opinion. Moral hazard theory shifts the blame for financial collapse to the incentives implicit in insurance, but Black shows that the large frauds were nearly all committed in institutions taken over for that purpose by criminal networks, often by big players like Charles Keating, Michael Milken, and Don Dixon. And there’s another thing about predatory institutions. They invariably fail in the end. They fail because they are meant to fail. Predators suck the life from the businesses they command, concealing the fact for as long as possible behind fraudulent accounting and hugely complex transactions; that’s the looter’s point.

That a government run by people rooted in this culture should also be predatory isn’t surprising—and the link between George H.W. Bush, who led the deregulation of the S&Ls, his son Neil, who ran a corrupt S&L, and Neil’s brother George, for whom Ken Lay sent thugs to Florida in 2000 on the Enron plane, could hardly be any closer. But aside from occasional references to “kleptocracy” in other countries, economic opinion has been slow to recognize this. Thinking wistfully, we assume that government wants to do good, and its failure to do so is a matter of incompetence.

But if the government is a predator, then it will fail: not merely politically, but in every substantial way. Government will not cope with global warming, or Hurricane Katrina, or Iraq—not because it is incompetent but because it is willfully indifferent to the problem of competence. The questions are, in what ways will the failure hit the population? And what mechanisms survive for calling the predators to account? Unfortunately, at the highest levels, one cannot rely on the justice system, thanks to the power of the pardon. It’s politics or nothing, recognizing that in a world of predators, all established parties are corrupted in part.

So, how can the political system reform itself? How can we reestablish checks, balances, countervailing power, and a sense of public purpose? How can we get modern economic predation back under control, restoring the possibilities not only for progressive social action but also—just as important—for honest private economic activity? Until we can answer those questions, the predators will run wild.