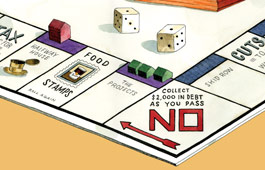 1 in 4 U.S. jobs pay less than a poverty-level income.

Since 2000, the number of Americans living below the poverty line at any one time has steadily risen. Now 13% of all Americans—37 million—are officially poor.

In 2002, Sen. Charles Grassley (R-Iowa) compared those who point out statistics such as the one above to Adolf Hitler.

Bush has proposed cutting housing programs for low-income people with disabilities by 50%.

Among the working poor, 13% of income is spent on commuting if public transportation is used, 21% if a private vehicle is used.

58% of Boston-area jobs suitable for welfare-to-work participants are within a mile of public transit.

1 in 3 people who’ve left welfare since 1996 did so because they couldn’t meet program requirements or they hit the 5-year limit.

1 in 7 have no work, no spousal support, and no other government benefits.

2 in 5 elderly live on less than $18,000 a year, including Social Security benefits.

600,000 high school students dropped out in 2004. If each had stayed in school for just one more year, the nation would have saved $41.8 billion in lifetime health care costs.

2/3 of the reported “shrinking” gap between white and black men’s wages is attributable to black men dropping out of the labor market altogether.

The true jobless rate of black men in their 20s without a high school diploma is 72%.

A prison record reduces a convict’s wages by about 15% and wage growth by 33%.

Since 1983, college tuition has risen 115%. The maximum Pell Grant for low- and moderate-income college students has risen only 19%.

The Consumer Price Index for urban dwellers is up 25% since the federal minimum wage was last raised.

80% of food stores in Brooklyn are bodegas. Only 1 in 3 sell low-fat milk or carry fruit.

Corn subsidies have helped the price of soda fall 30% since 1983. Meanwhile, the price of fruit has risen 50%.

Per capita, the nih spends $68 on diabetes, which disproportionately affects the poor, and $1,414 on Lyme disease, which is named after a suburb in Connecticut.

Initially an anti-redlining effort, sub-prime mortgages have risen tenfold since 1994.

Today, 1 in 4 sub-prime lenders are predatory, charging recipients 7% in up-front fees. Conventional or “prime” mortgage users are charged only 1%.

2% of prime mortgages carry prepayment penalties. 80% of sub-prime ones do.

In Chicago’s poorest areas, the ratio of check-cashing outlets to banks is 10-to-1.

The average annual interest rate on a payday loan is more than 400%, costing borrowers $3.4 billion a year.

America now has twice as many publicly available gambling devices that take money—slot and video poker machines and electronic lottery outlets—as it has atms that dispense it.

In 2004, 7 million working poor families spent $900 million on tax prep and check-cashing fees to get their refunds sooner.

Average amount of time by which they sped up their refunds: 2 weeks.

1 in 7 families claim the Earned Income Tax Credit, designed to lift the working poor above the poverty line.

In 2003, the IRS estimated it “protected” $3.1 billion of revenue by cracking down on EITC filings. Half of all audits are now conducted on taxpayers earning less than $25,000.

See How the Rich Get Richer