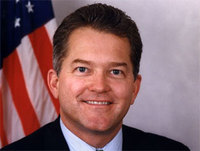 Congressman Mark Foley (R-FL) planned to resign today, hours after ABC questioned him about sexually explicit internet messages with current and former Congressional pages under the age of 18.

In the series of e-mails, obtained by ABC News, from Rep. Foley (R-FL) to the former page, Foley asks the young man how old he is, what he wants for his birthday and requests a photo of him.

The concerned young man alerted congressional staffers to the e-mails. In one e-mail, the former page writes to a staffer, “Maybe it is just me being paranoid, but seriously. This freaked me out.”

The e-mails were sent from Foley’s personal AOL account, and the exchange began within weeks after the page finished his program on Capitol Hill. In one, Foley writes, “did you have fun at your conference…what do you want for your birthday coming up…what stuff do you like to do.”

In another Foley writes, “how are you weathering the hurricane…are you safe…send me an email pic of you as well…”