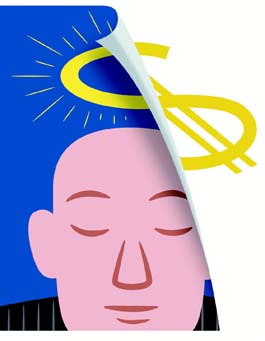 Ten percent of a two-year-old’s nouns are brand names; by the time an American child heads to school, he or she can recognize hundreds of logos. Disney is now putting its cartoon characters on fresh fruit, arguing (perhaps correctly) that it’s the only way to get kids to eat it. If that’s the world we’re born into, is it any wonder we want corporations to solve our biggest problems as well? Isn’t it a parent’s job to protect us? And besides, who else has the capital and the power to do what needs to be done in the face of a crisis like global warming?

Any sign that corporations might be willing to take on the job is greeted with an enthusiasm that borders on delusion. When John Browne, the head of British Petroleum, gave a speech in 1997 admitting that global warming exists, and announcing that business must respond “to the reality and the concerns of the world in which you operate,” people began calling him the “Sun King.” The head of California’s Environmental Protection Agency ventured that “this bold move will set the world stage for other companies to emulate.” BP commissioned green roofs for its filling stations, along with a whole slew of ads touting its vision for a world “beyond petroleum.” And there is every reason to think Lord Browne was sincere—he’d studied the problem, knew it was big, and was willing to buck the rest of the industry in saying so.

Browne was not the only executive thinking aloud about how corporations relate to the rest of the world. His comments came as the debate over “corporate social responsibility,” long a preoccupation for people in fuzzy sweaters, was about to explode into mainstream business culture. The movement has now spawned a booming industry in consultants and conferences; just this summer the World Business Council on Sustainable Development issued a manifesto titled “From Challenge to Opportunity,” filled with pictures of baking deserts and disease-stricken peasants, but also with promises to “seek greater synergy between our goals and those of the society we serve.” BP signed on, and so did everyone from Adidas to Procter & Gamble.

Which is nice. The question is, what does it amount to?

Take BP. In 2004, its revenues from solar power were almost $400 million; its total revenues, almost entirely from hydrocarbons, were $285 billion. In other words, the company has gone beyond petroleum to the tune of about one-sixth of 1 percent of sales (see “It’s Not Easy Being Green,” opposite page). And the news gets worse from there. The leak disaster that led to this summer’s sudden shutdown of BP’s Alaska pipeline turns out not to have been sudden at all. Back in 1992, when a whistleblower raised concerns about corrosion in the pipeline, BP responded with a corporate crackdown that a federal judge said was “reminiscent of Nazi Germany.” Elsewhere, the Wall Street Journal reports that federal regulators are investigating whether BP tried to influence crude-oil prices using information about its Oklahoma pipelines and storage tanks; in a separate probe, investigators are trying to figure out if BP gamed gasoline prices on the New York Mercantile Exchange. Meanwhile, the company’s top American executive was cochairman of the Bush reelection campaign in Alaska. Not very far beyond petroleum, that.

There is no question that entrepreneurs with a social bent can do enormous good—especially until they decide to go public or sell out to a larger corporation. And they can do well at the same time, connecting with a reasonably large block of motivated consumers. If I need paper towels, they’re damn well going to come from Seventh Generation. I would probably wear Patagonia jackets even if they weren’t so incredibly warm.

But these tend to be one-off deals. Ben and Jerry didn’t seem to change the way Häagen and Dazs viewed the world. Somehow, Bounty has been willing to leave the thoughtful paper towel market to Seventh Generation. For several decades now, environmentalists have been citing the work of Ray Anderson and Interface (see “The Carpet Cleaner,” Page 56), and it’s a great example—but why is there still only one Ray Anderson?

Often the difficulty is built right into a company’s business model. It makes scant difference whether Wal-Mart starts stocking organic food or not, because the real problem is the imperative to ship products all over the world, sell them in vast, downtown-destroying complexes, and push prices so low that neither workers nor responsible suppliers can prosper. (In fact, Wal-Mart’s decision to sell organic food will almost certainly mean the final consolidation of the industry into the hands of a few huge growers that ship their produce across thousands of miles—not to mention that the people ringing up the organic groceries will still make below-poverty wages and taxpayers will still be footing the bill for their health care. There’s something gross about buying a healthy carrot from a sick company.)

By the same token, though, business models can propel companies forward even if the ceos couldn’t care less about the planet: Dow and DuPont have cut their carbon emissions by upward of 50 percent this decade, simply because their managers started to pay attention to energy costs and figured out that efficiency went straight to the bottom line.

“Will business save the world?” turns out to be the wrong question. The right question is “How can we structure the world so that businesses play their part in saving it?” And the answer to that, inevitably, is politics.

Some of it is the politics of public awareness. It’s no accident that Vermont and Oregon are hotbeds of do-good capitalism; in these places attitudes have shifted so that conscience pays. Many of us have worked like crazy to get people excited about, say, hybrid cars—and, aided by rising oil prices, the propaganda has begun to succeed.

But mostly we need politics of a more straightforward, and entirely unglamorous, variety. If you want energy companies to rearrange their portfolios so that way more money goes to renewables and way less to hydrocarbons, the best way forward is not to appeal to the ceo’s conscience—it’s to pass laws to push him in the right direction. This is what has happened in Europe, where regulators told car manufacturers last August to cut vehicles’ greenhouse emissions by 25 percent—or else (see also “The Muscles From Brussels,” Page 62). “The car industry should be aware that we are watching the situation very closely,” one official told reporters, adding that the EU “will not hesitate to replace the carrot with the stick.” There’s nothing particularly European about that logic—witness the efforts in the United States of a few bold state attorneys general, who in the face of federal inaction have begun to sue major carbon emitters on their own. They may not win—but the threat of liability has already gotten big polluters to talk about offering voluntary carbon cuts in exchange for legal immunity. In an August report, the investor activist group Ceres quoted a Goldman Sachs analysis that put possible global warming liability on the same scale as the fallout from asbestos. That kind of information will grab a ceo’s attention in a hurry.

Helping corporations do the right thing through regulation—which, it should be noted, also levels the playing field so that a greenish BP doesn’t have to worry about a dirty Exxon­Mobil—is not exactly a new idea. It’s more or less what we used to do, in the long period from Teddy Roosevelt and the trustbusters on to about the 1980s.

One reason for the shift is the enormous political power of corporations, which they use almost exclusively to boost their own profits. But in a way, you can’t blame them for that. The strange part is how little opposition the corporate agenda meets anymore—how many of us have accepted the ideological argument that as long as we leave commerce alone, it will somehow, magically, solve all our problems. We could compel Big Oil to take its windfall profits and build windmills; instead we stand quietly by, as if unfettered plunder were the obvious and necessary course.

Explaining this mystery may bring us back to where we started. In the childlike enchantment we’ve lived under since the Reagan era, we’ve wanted very much to believe that someone else, some wavy-haired ceo, would do the hard, adult work of problem-solving. In fact, corporations are the infants of our society—they know very little except how to grow (though they’re very good at that), and they howl when you set limits. Socializing them is the work of politics. It’s about time we took it up again.