Ah yes, remember this Economist cover? Not so funny today… 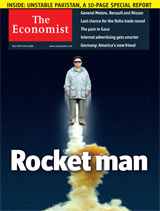 Over the longer term, experts worry about pressure on North Korea’s neighbors to match its new nuclear capabilities. Japan, in particular, has the ability to move in this direction quickly, notes CFR’s Walter Russell Mead. This CATO brief looks at the “inevitable” march of nuclear arms across Asia. And here are issue briefs from the Nuclear Threat Initiative on Japan and South Korea. Writing in Asia Policy, Marcus Noland, a fellow at the Institute for International Economics, examines the possible economic impact of a Pyongyang nuclear test (PDF) on East Asia. North Korea could likely “build a crude nuclear warhead” and has enough plutonium for between four and thirteen nuclear weapons (PDF) say analysts David Albright and Paul Brannan of the Institute for Science and International Security. The Nuclear Threat Initiative provides a chronology of North Korea’s missile development program and maps of suspected nuclear enrichment sites.