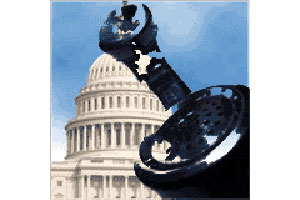 You may have gotten a call from Gabriel Joseph III already. It starts with one of those cheery robo-voices asking if you’ll participate in a 45-second survey. If you don’t slam the phone down at that point, you’ll soon get to a question like this one: “In America when a person dies, the IRS can take up to 55 percent of the inheritance left for family and friends. Do you want Congress to permanently eliminate this unfair tax?” Next, you’ll be told that the Democrat running for Congress in your district “voted to keep the death tax in place and refused to vote to make permanent the tax cuts that have caused record economic growth in 2001.” At that point, you’ll know that you’re dealing with a “push poll”—one of the dirtier, yet mostly legal, tricks in a political operative’s bag of last-minute campaign tools.

Push pollsters operate behind the scenes: They don’t advertise their services, don’t go on TV, and often can’t be tracked as they hide behind dozens of aliases. The push polling firm that placed calls to voters in the South Carolina GOP primary in 2000, suggesting that John McCain had an out-of-wedlock child who was black, was never identified, though the calls may well have cost McCain that election.

It was all the more remarkable, then, when Gabriel Joseph outed himself and his firm in a legal battle in Indiana recently. Joseph’s company had been doing “surveys” for the Economic Freedom Fund, a group bankrolled by Bob Perry of Swift Boat Veterans for Truth fame. When the fund was sued by the Indiana Attorney General’s Office for violating a state anti-robo-calling statute, Joseph countersued; a judge ruled against him October 25.

Joseph’s firm operates under at least a half dozen names. Most of the time, the company is called ccAdvertising, though it also goes by FreeEats.com as well as a range of less colorful aliases, including FEC Research, Political Research, and Election Research. The FreeEats moniker, Joseph says, is a hangover from the dot-com boom, when he was in the business of pushing web traffic to clients. Today, FreeEats does mostly political work. In November 2002, the company issued a press release claiming to have played a role in the “Republican force that swept America on November 5,” noting that “no fewer than six winning candidates and one hot ballot referendum were influenced” by its efforts.

The key to FreeEats’ success has been automation—it has developed proprietary robo-calling software that responds to people’s answers and records them. It’s similar to the technology used by firms that peddle satellite TV or preapproved mortgage loans; some genuine political polling outfits, such as Rasmussen and Survey USA, also use robo-calls. “Previously, this could have been done only by using live callers,” Joseph said in 2002. “But we’ve automated it, making the process far more efficient and cost-effective, which saves the candidates invaluable time and much-needed funds.” Joseph estimates he can handle 3.5 million calls per day, each one costing less than 15 cents.

Dave Johnson, a fellow at the Commonweal Institute, a progressive think tank based in California, says push polls are among the most effective forms of political messaging, far more persuasive even than TV spots. “People are inclined to believe you when they think they’re getting a poll,” he explains. “It immediately adds credibility to what they’re hearing.” Push pollsters also identify voters’ party preferences—information that can then be used in get-out-the-vote campaigns. Just how successful these tactics are is a matter of some debate, but according to Larry Sabato, the director of the University of Virginia’s Center for Politics, they certainly have an effect. “Even if they change just 1 percent of the vote, that’s a close election margin,” he told me in an email. Nancy Mathiowetz, the president-elect of the American Association for Public Opinion Research and a professor of sociology at the University of Wisconsin-Milwaukee, says that with the use of robo-calling, “we’ve seen a proliferation of push polling this year, because it’s relatively cheap.”

Business has certainly been booming for FreeEats, which has deployed its technology on behalf of conservative candidates and causes ranging from the National Rifle Association and the anti-immigration Minutemen to Tom DeLay, who paid the firm $24,101 for telemarketing work between November 2005 and February 2006. DeLay’s ally Grover Norquist, head of Americans for Tax Reform, has hired FreeEats to push his antitax agenda, including an unsuccessful effort to prevent a tax increase in Colorado.

FreeEats has also become the go-to firm for conservative groups fighting to restrict gay marriage and abortion, both issues that are dear to the company’s chairman, Donald P. Hodel—a longtime Washington insider who served in two Cabinet posts (secretary of the interior and of energy) during the Reagan administration, then went on to become president of both the Christian Coalition and Focus on the Family. (Mother Jones’ calls to Hodel’s home in Silverthorne, Colorado, went unanswered.) In 2004, FreeEats was commissioned by the Defense of Marriage Coalition to promote a referendum banning gay marriage in Oregon. During the company’s telephone surveys, Oregon residents reported being told: “In Massachusetts, where court-ordered same-sex marriage is legal, they are now preparing materials to teach the gay lifestyle to children, beginning in kindergarten.” The referendum passed by a 14-point margin.

This time around, FreeEats has placed calls in 49 states, according to court filings. Among its clients is the Economic Freedom Fund, a political committee run out of the Sacramento law firm of Charles H. Bell Jr., who is also the general counsel to California’s Republican Party. The fund, founded in August, is almost entirely financed by Perry, the Texas real-estate magnate and friend of Karl Rove’s, who has donated a total of $5 million to the group.

But this time, FreeEats may have bitten off more than it can chew. The company, along with the Economic Freedom Fund, is now battling a lawsuit from the Indiana Attorney General’s Office, charging that they broke the law in a “survey” in the 9th Congressional District, where former Democratic congressman Baron Hill is fighting to retake his old seat from Republican Mike Sodrel. According to court documents, FreeEats’ robo-calls told voters that the Democrat “voted to allow the sale of a broad range of violent and sexually explicit materials to minors.” Each call wound up with the question, “Does knowing this make you less likely to vote for Baron Hill?”

The allegation appears to refer to Hill’s 1999 vote against a measure introduced by congressman Henry Hyde (R-Ill.) that was so radical, critics said it could have prohibited children from reading anything from the Bible to the morning newspaper. But it wasn’t the content of the calls that caused the attorney general to take notice: The robo-calling software itself, the AG argued, violated a state statute prohibiting automated calls to Indiana residents. (North Dakota once fined FreeEats $20,000 for violating a similar statute.) Anticipating that campaigns might turn to such technology, Indiana’s attorney general, Stephen Carter, had specifically alerted state party leaders to the prohibition in late August; in mid-September, after receiving 12 consumer complaints, Carter filed suit against the Economic Freedom Fund as well as American Family Voices, a left-leaning organization that was placing automated calls critical of Hill’s opponent. FreeEats, which had originally been named as “John Doe 1” in Carter’s complaint, then countersued, arguing that federal law and FCC regulations trump Indiana’s statute.

Joseph, who says FreeEats has spent a considerable amount of money on legal expenses in general, says it’s a First Amendment issue. “There’s no more effective free speech tool than what we do,” he told me. “That’s why people complain. Because we’re effective. If it wasn’t effective, nobody would say anything.” On October 24, U.S. District Judge Larry McKinney ruled against FreeEats, upholding Indiana’s right to enforce its statute. “Contrary to FreeEats’ suggestion, the harm is more than the simple ringing of the telephone,” McKinney wrote in the ruling. “A call recipient cannot interrupt a prerecorded message and request not to be contacted, and if the individual does not answer the telephone or hangs up he or she runs the risk of additional calls in the future.” Joseph says his lawyers are reviewing the decision.

But the Indiana ruling won’t stop Joseph from operating in other states, and with about two weeks to go in the campaign, some political observers believe that firms like FreeEats are just warming up. “That’s what’s coming—the short-term stuff where you don’t have the chance to respond,” says Johnson of the Commonweal Institute. “I don’t even think we’ve seen the Republican campaign start yet.” Christopher Lee, a former Hill staffer who is the director of government relations for the Council for Marketing and Opinion Research, says that there is typically a spike in push polling efforts in the weeks before an election. “You’re going to start seeing a lot more phone calls to the people who are in the haven’t-made-my-decision category.”

Push polls are also a favorite tool in the get-out-the-vote stage of campaigning—and an investigation of a state GOP official by Alaska’s attorney general in 2003 revealed another glimpse of the company’s playbook. “If they support our candidate, the candidate comes on with a 20-second GOTV thanking them for their vote and asking them to get their friends and family to vote as well,” Joseph wrote in an email to Alaska Republican Party chairman Randy Ruedrich, according to the Anchorage Daily News. “If they support the opponent, we deliver a voter suppression message.” (Joseph told me he didn’t recall this exchange and denied that he would ever use the phrase “voter suppression.” He said he was unaware of the Daily News article, though he is quoted in it.) According to the story, FreeEats’ services were recommended to party leaders in Alaska by a former state Assemblyman, who, in turn, learned of the firm from “someone at the White House.”

When I asked Joseph about the various allegations lodged against his firm over the years, he responded that what’s been said or written about FreeEats doesn’t matter in the end—what counts is impact. “When you make 3 ½ million phone calls a day, we generally talk to more people than watch television, listen to the radio, or read the newspaper combined.” He paused, then added quietly, “If someone writes something that I don’t like, I can make their life—I can make them understand a few things if I choose.”