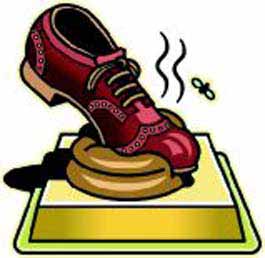 NOMINEE 1
Senator Joe Biden (D-Del.), the first Democrat to announce that he was exploring a run for president, explained that he doesn’t lust after the executive office, saying, “I’d rather be at home making love to my wife while my children are asleep.”

NOMINEE 3
Rep. Jim Moran (D-Va.)
joined his fellow Democrats in denouncing the Republican
“culture of corruption” and the cronyism associated with earmarks—the process that lets members insert a line in a bill to provide funding for a special constituent in the home district. But later in the same speech, noting that he’s likely to become the chairman of an appropriations subcommittee, Moran promised supporters, “When I become chairman, I’m going to
earmark the shit
out of it.”

NOMINEE 4
Rep. Steve King (R-Iowa) doesn’t just support building a wall at the border; he wants to run 2,000 miles of electric fence on top of it, carrying “the kind of current that would not kill somebody, but it would simply be a discouragement for them to be fooling around with it. We do that with livestock all the time.”

NOMINEE 5
Rep. Katherine Harris (R-Fla.) told her then-campaign adviser, Ed Rollins, that God had instructed her to stay in the Senate race against Democrat Bill Nelson.

NOMINEE 6
John Jacob (a Republican congressional candidate in Utah) blamed Lucifer himself for sabo­taging his campaign: “There’s another force that wants to keep us from going to Washington, D.C. It’s the devil is what it is.” He added, “I don’t know who else it would be if it wasn’t him. Now when that gets out in the paper, I’m going to be one of the screw-loose people.”

WINNER! Katherine Harris, whose comment prompted Rollins to reply, “Maybe God wants Nelson to stay a senator and that’s why he’s encouraging you to stay in.”