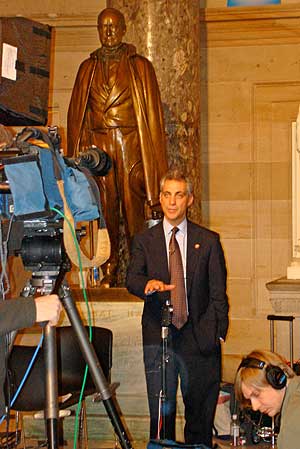 Directly after a State of the Union that left observers ranging from the fawning
(“A Force,” drooled National
Review) to the enraged (“LAME,” screamed Slate’s homepage. “Tepid,” complained its article),
lawmakers and Washington insiders mingled with their colleagues and the press.
Mother Jones sought some out for their thoughts. For example, Democratic Congressman
Rahm Emanuel (above) of Illinois’ 5th District spoke to Mother Jones after appearing in
front of cameras that were situated along the edge of Statuary Hall. Of the president’s health care plan, Emanuel said, “I think it leaves
in place a broken tax code and a failed healthcare system. Outside of that,
it’s really got a lot of merit.” The congressman’s prediction: “[A vote] won’t even
come up.” 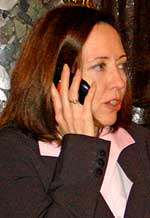 Senator Maria Cantwell of Washington State took a few moments between phone
calls to speak with Mother Jones. To her, the highlight of the State
of the Union was Nancy Pelosi, the first female Speaker of the House, sitting
next to Vice President Dick Cheney. The juxtaposition “paints a picture for America of what’s
been the past and what is the future. To me was very exciting. I was so glad
that the President stopped at the beginning [to congratulate Pelosi and Democrats].”
Her low? “[Bush] mentions diplomacy in his State of the Union about
the U.N. and others, but to me, you can’t just be for the long hard slog of
deployment, you have to be there for the long hard slog of diplomacy, too.” 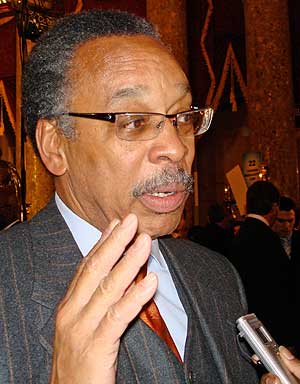 Bruce Gordon, President and CEO of the NAACP was disappointed with the speech.
“The nation is not attentive to the issue of poverty. They are not dealing with
the fact that too many of their fellow Americans are living below the poverty
line, and in fact, most Americans don’t even know where the poverty line is.
One-third of Black and Hispanic Americans are living at a level that is not
liveable.” 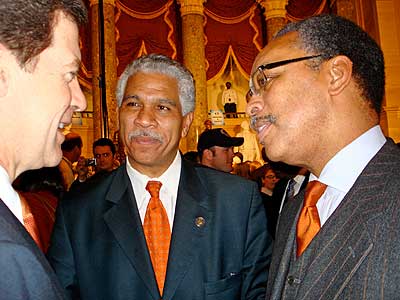 From Left to Right: Senator Sam Brownback of Kansas, Hilary Shelton of the NAACP’s Washington
office, and Bruce Gordon. Gordon said of Bush’s
healthcare plan, “If you can’t afford to buy healthcare insurance, then you
can’t write it off. I think that for too many people it just was not a solution
that’s viable.” 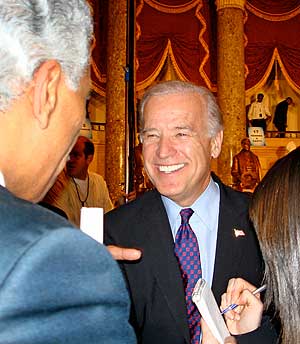 Senator Joe Biden (D) of Delaware was the only presidential hopeful who stopped
in to talk with press in Statuary Hall. He was also one of the more obvious
active listeners in the audience during the State of the Union address. He was
the first to stand during the standing ovations for the president’s mention of
“the serious challenge of global climate change” and the situation in Darfur. 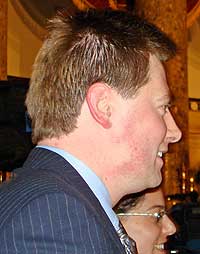 Congressman Jason Altmire (D) of Pennsylvania’s 4th District stopped to share
some of his shock with Mother Jones before continuing to work the room.
“He’s submitted to Congress six consecutive budget deficits, he’s going to introduce
an unbalanced budget in a couple of weeks, he’s run up one of the biggest deficits
we’ve ever had, so I’m a little bit surprised to have him come in and lecture
the Congress about deficit spending and fiscal responsibility.” 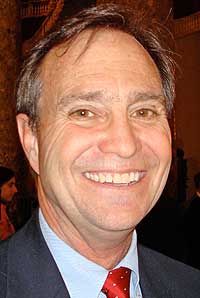 Congressman Ed Perlmutter (D) of Colorado’s 7th was supportive of the President…
to a point. “On energy, that was something where I really felt like even though
I would want him to go farther, at least he’s starting to head in the right
direction. And as a Democrat, when the guy’s starting in the right direction,
I’m gonna help him keep going that direction. [However,] I don’t like where
he’s headed on Iraq, I think it’s more of the same, and I’m gonna resist that.” 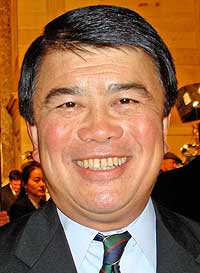 Congressman David Wu (D) of Oregon’s 1st District called the president’s healthcare
plan “fatally flawed.” He was, however, beaming with pride about his own healthcare
idea. “The proposal I’ve been working on for a good while now we call MediKids.
Which is to give universal coverage like what Medicare does for seniors for
kids from pregnancy to age 18.”