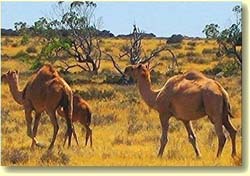 Australia’s current drought, the worst in a century, is driving its feral camels mad with thirst. The country’s 1 million wild camels, the largest population in the world, are stampeding through Western Australian towns looking for water. “They did a lot of damage searching for water,” a townswoman told Reuters, “trampling air conditioning hoses, taps, and pipes.” Despite these attempts, thousands of the animals are being found dead along the dried-up banks of the Docker River.

The camels, which usually travel in groups of about 100 animals, were first introduced to Australia around 1840 to provide transportation through the dangerously hot and expansive deserts of Western and Central Australia. The several different breeds–slender riding camels from the Middle East, two-humped camels from China, and draft camels from India–were essential cargo vehicles for the country’s many infrastructure projects. But by 1930, autos had replaced camels and the animals were left to fend for themselves.

Left alone, the animals flourished in the desert and today camels are an epic problem Down Under, particularly for the Aboriginees who live in more remote areas of the contintent. In an attempt to control populations, Australia captures and sends live camels to Southeast Asia and hope to send 25,000 a year to Muslim markets.

Even such measures will be insufficient to deal with animals that live for 50 years, breed for 30, and whose population doubles every eight years. As global warming increases the droughts, gangs of hundreds of thirsty camels will most likely continue to be a force to reckon with. Researchers are meeting in Perth tomorrow to decide their fate.