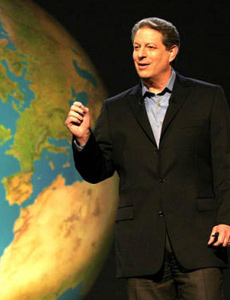 It was a Democratic love fest on Capitol Hill yesterday when Al Gore came to testify about the “planetary emergency” caused by global warming before the Senate Committee on Environment and Public Works, a bittersweet counterpoint to the ex-VP’s last appearance on the Hill, back in 2001 when he presided over the Congressional session confirming George Bush’s electoral victory. What a difference six years, and a pair of Academy Awards, makes: Chairwoman Barbara Boxer, in her opening statement, set the tone, gushing, “There are some moments in human history when individuals have the ability to make a difference and sometimes it’s the simple telling of a great truth, however inconvenient.”

When the Democrats took control of Congress in November of last year, environmentalists were ecstatic that a California conservationist would replace Senator James Inhofe (R-Okla.), who has called global warming “the greatest hoax ever perpetrated on the American people,” as chair of the environmental committee. And none, perhaps, more than Gore, who told the senators that “it is hard to estimate the hope that people have because of what you are doing and what everyone hopes you will do.” Gore didn’t hold back in the rest of his testimony either, likening the United States’ approach to the planet to a “bull in a china shop,” and rattling off his recommended fixes, which include, among other things, an immediate freeze on carbon dioxide emissions.

Following Gore’s testimony came the part that everyone was waiting for, when he was questioned by his most persistent critic. Inhofe, author of “A Skeptic’s Guide to Debunking Global Warming Alarmism,” did not disappoint, peppering Gore with a round of rapid-fire and often hostile questions. Concerned that Gore would run out the clock with his “long-winded” responses, Inhofe demanded that he restrict his answers to either yes or no. When Gore attempted to diverge from the rules, Inhofe promptly cut him off. Boxer intervened, saying that she would be happy to stop the clock to allow Gore more time. Inhofe tried to protest, his face growing red, but Boxer coolly reminded him that he no longer made the rules: “You used to, when you did this. I make the rules [now].”

During the lightning round, Inhofe asked Gore — who last month had to admit to a home energy consumption of 20 times the average household’s — to make a personal pledge to consume no more energy than the average American household. Gore attempted to explain that he and his wife are using green energy and purchasing offsets to install solar panels, but Inhofe wasn’t interested. “I’ll take that as a no.” Not more than 20 minutes later, Inhofe’s staffers scurried around the press tables handing out a “press update” noting that Gore had refused to sign the pledge.

Amidst pointed questioning from the minority and effusive accolades from the Dems – “It’s not everyday that this committee has an Academy Award winner testifying,” said Sen. Amy Klobuchar (D.-Minn.) — committee members plugged their various global warming fixes. Sen. Joseph Lieberman (I-Conn.) talked up the cap and trade bill that he is cosponsoring with Sen. John McCain (R-Ariz.) and Bernie Sanders (I-Vt.) pitched the legislation that he is co-sponsoring with Boxer, which would “lower greenhouse gas emissions by the year 2020 to 1990 levels,” by calling for a mandatory cap on greenhouse gases, and creating incentives for the development of cleaner technologies.

Although the partisan divide on this issue was quite evident, Gore implored the committee members to put politics aside. “This is not a partisan issue, it’s a moral issue,” he said. If nothing is done to combat global warming, he continued, his voice rising, the next generation will look back and ask, “What in God’s name were they doing?”