In today’s edition of What I Did On My Trip To Coachella, you will experience: Unbearable heat! Profusion of bros! Arcade Fire! Celebrities! And VIP fashion trends! It’s Coachella Day Two, and the dusty crap in my nose is still fresh, so let’s get this all down before I forget.

4:14 pm – We enter the venue. The heat is up at least one major level from yesterday: it’s a searing blast, like when you open an oven, except it doesn’t stop. Regina Spektor is on the main stage, and deserving it — casual, funny, and charmingly odd, her songs veer off in unexpected directions, saving them from “I Kissed a Girl”-style corniness. Plus she does a number in Russian. 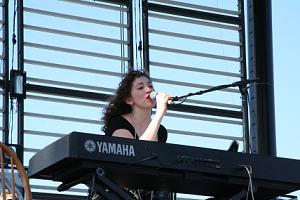 Above: Regina Spektor would have used a steak, but she’s a vegetarian

4:45 pm – Hot Chip are on a side stage that faces the setting sun. We can barely get in and the sun is directly on our backs. The heat is like a sauna, and the sweat pours off of us like rivers. I have never been so hot. I do the unthinkable and remove my shirt. Perhaps it’s the giddiness that comes before heatstroke, but Hot Chip’s electro jams are rocking my world.

4:53 pm – They end with a radically reworked version of “Over and Over,” and the heat-addled crowd goes wild.

5:08 pm – Off to see New Pornographers on the outdoor stage. “It’s hot,” says lead singer A.C. Newman, in the undestatement of the year. “What’s up with that?” They follow this, appropriately enough, with the sunny sounds of “Sing Me Spanish Techno.”

5:21 pm – The harmonies sound a little half-hearted at the end of “Bleeding Heart Show;” I think these Canadians are really having a tough time in the heat.

5:40 pm – Time for Peter, Bjorn & John, the Swedish combo whose “Young Folks” is taking over radio and TV commercials all around. They’re underwhelming live. Canadian techno duo MSTRKRFT are next door in the dance tent and I split from my friends to try to get some of my elecro jollies that were so sorely lacking yesterday at Faithless. The entire tent is jammed with people, but I’m still so sweaty that I seem to slip right in between the dancers and somehow find myself right in front of the massive stage. They put on an amazing techno track based around an increasingly distorted buzzing alarm noise. A “dance pit” has emerged in front of the stage: an empty circle into which people are jumping and doing a few moments of an amusing dance of some sort, to the cheers of the crowd. As the buzzing noises climax, everyone jumps into the circle in a kind of techno orgy… but in a good way.

6:12 pm – There is a mass migration to the main stage. Arcade Fire are on at 7:30pm and we are planning to try and get a prime position during Kings of Leon. First we make a pit stop in the VIP corral. Arctic Monkeys are hanging around, looking painfully sunburned. Danny Devito walks by.

6:21 pm – Fashion update: being very, very skinny is really in this year!

6:45 pm – We make our way to the stage for Arcade Fire. Everyone else is doing the same thing. Kings of Leon are good sports and thank everyone for putting up with them in the meantime.

7:40 pm – Arcade Fire take the stage, to a distorted recording of a preacher. “Keep the Car Running,” the latest single, kicks off the show, and as they continue, it’s… good, but not great. Between songs, there are eerie sound effects like thunder and static; it seems to suck the energy out of the crowd. 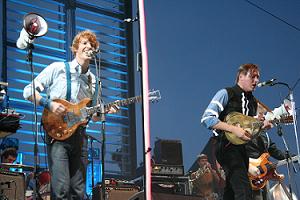 Above: Arcade Fire fight the power of the Chili Peppers bros

8:10 pm – In my vicinity there are a variety of shirtless males who seem oddly uninterested in the band. “Why are they here?” I think, and then I remember: Red Hot Chili Peppers are next.

8:30 pm – Arcade Fire finish with “Rebellion (Lies).” Win seems to sense a disconnect with the crowd and runs down into the wide no man’s land between the security barriers, holding the microphone up to the crowd to sing “Lies! Lies!” in the chorus. It’s a good effort, but when he returns, he seems to get lost, and he flubs the chord change when the song enters its usually shiver-inducing coda. There are a few dissonant measures, but then they figure out their mistake and finally seem to relax, laughing to each other on stage.

9:00 pm – After the show I meed up with Miles, my Arcade Fire-obsessed friend. He had camped out in front of the stage three bands before to get a good spot, and made it to the very front. “But I was surrounded by The 300,” he says. “What do you mean, just a bunch of buff guys?” “No,” he says, “buff guys actually doing dialogue from ‘The 300’ with each other, yelling ‘we are Sparta’ and doing the “Hoo, hoo,” chants and crap.” They were apparently all waiting for Red Hot Chili Peppers and mocked Miles for caring about this strange Arcade Fire band. Miles was undaunted, yelling, “the Chili Peppers suck compared to this!” One of The 300 drawled, “whoever said that’s a dumbass.” 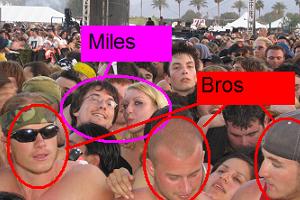 Above: Miles surrounded by Spartan warriors

9:10 pm – It’s still hot. Exhausted and spent, we retreat to the VIP corral. One of my friends buys a coconut with a straw to drink, and Silas from “Weeds” comes up and asks her where she got it. She tells him and asks when “Weeds” Season Two is coming out on DVD. He doesn’t know but mentions it just came out on iTunes.

9:45 pm – Off to the dance tent for LCD Soundsystem. The tent is jammed, and even though everybody else has their hands in the air, we just have to sit down. It’s still fun though, watching the lasers spray geometric designs around the ceiling, and the massive cheers for tracks like “Tribulations” and “North American Scum” restore my faith in America… somewhat. 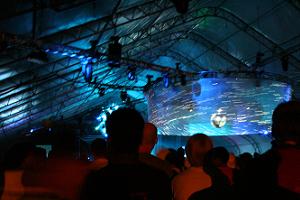 Above: the LCD Soundsystem signature disco ball in effect

10:30 pm – We wanted to stay for The Rapture, but it ain’t happening. My feet are killing me, and despite some disappointments, there’s a definite feeling of having achieved greater musical satisfaction today than on Friday. Regina Spektor, New Pornographers, MSTRKRFT and LCD were all really good, and it’s not like Arcade Fire were bad, they just didn’t change my life, like usual. We get back to the house, looking forward to some quality pool time, and suddenly a giant gust of wind comes up, causing a miniature dust storm. We retreat indoors and put Joanna Newsom on the stereo.

Stay tuned tomorrow, when we’ll hear from The Roots, Kaiser Chiefs, Soulwax, and Air; we’ll see what the deal is with Manu Chao, and if a Rage crowd is more pleasant than a Chili Peppers crowd.