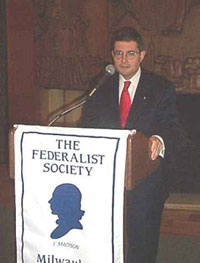 Before midnight on March 7, 2005, Leonard Leo tapped out an email on his BlackBerry to Mary Beth Buchanan, then the director of the Executive Office of United States Attorneys, suggesting a candidate to replace Carol Lam, the U.S. Attorney for the Southern District of California. “You guys need a good candidate?” Leo, the executive vice president of the Federalist Society, wrote to Buchanan, herself a member of the influential conservative lawyers’ group. “I’d strongly recommend the current GC [general counsel] of the Air Force, Mary Walker.”

At the time, White House and Justice Department officials were in preliminary talks about replacing an unspecified number of “underperforming” federal prosecutors, a plan that would culminate almost two years later in the forced resignations of nine U.S. Attorneys, including Lam, and ignite a scandal that has claimed the jobs of at least four high-ranking Justice Department officials. Leo’s email, written so early in the process, speaks to the close relationship that has developed between the Federalist Society—an organization whose aims include “reordering priorities” within the judicial system to fit its conservative agenda—and key Justice Department decision makers, many of whom are members of the group.

While perhaps not a prerequisite for employment at the highest echelons of Justice, membership in the society has become a standard by which political appointees at the agency identify candidates who share their agenda. Some officials at the agency view it as such an indicator of conservative virtue that membership in the society was included as a category—along with Hill and campaign experience—on a spreadsheet that was used to rank the qualifications of the 93 sitting U.S. Attorneys, a document included in the reams of Justice Department memoranda released by the House Judiciary Committee this spring.

Beyond highlighting the organization’s role as the administration’s de facto headhunter for conservative lawyers and judges, Leo’s correspondence raises the question of what, if any, role the Federalist Society played in the prosecutor firings. Leo did not respond to messages left at his office and on his cell phone, but he told the New York Times last night that, when he emailed Buchanan, he was unaware that a plan was in the works to replace multiple U.S. Attorneys. But, he acknowledged, his recommendation was not unsolicited. “The only way I could have possibly made that recommendation is if somebody said to me, ‘Gee, do you know anyone who would be good?'” he said.

Leo’s email, released yesterday as part of an ongoing congressional investigation into the prosecutor firings, marks the second time in as many days that his name has been raised in connection with the probe. Testifying before the Senate Judiciary Committee on Tuesday, Bradley Schlozman—the controversial Justice Department official who replaced Todd Graves as the U.S. Attorney for the Western District of Missouri—acknowledged seeking Leo’s advice on candidates to fill career positions at the agency. Unlike his former colleague, Monica Goodling, who testified that she “crossed the line” in vetting the political bonafides of job applicants, Schlozman denied subjecting potential hires to a political litmus test.

His record would suggest otherwise. Schlozman is a member of the Federalist Society, and in May the Boston Globe reported that half of the career lawyers hired during his tenure were members of the society or the conservative Republican National Lawyers Association; among the eight hires during the previous two years, none had been. According to Joseph Rich, a 37-year veteran of the Justice Department who served as the head of the agency’s voting rights section until 2005, Schlozman was among a cadre of appointees who have presided over an unprecedented wave of politicization at the agency. Within the Civil Rights division, where Schlozman served until March 2006, “there appeared to be a conscious effort to remake the Division’s career staff,” Rich told Congress in March. He described “major” changes in hiring procedures “which virtually eliminated any career staff input into the hiring of career attorneys.” As a result, he went on, the attorneys hired for the division had “little if any experience in, or commitment to, the enforcement of civil rights laws.”

The politicization of Justice went well beyond hiring practices, according to Rich, extending to efforts to “influence elections.” Schlozman, he says, was part of a group of political appointees that greenlighted Tom DeLay’s controversial redistricting plan, which resulted in Texas Republicans winning a record number of U.S. House seats in the 2004 election. Later, while serving as the interim U.S. Attorney in Missouri, Schlozman indicted four voter registration recruiters for the Association of Community Organizations for Reform Now (ACORN) on charges of voter fraud days before the mid-term elections. (During his Senate appearance this week, Schlozman maintained that he was unaware of ACORN’s political leanings.)

The Federalist Society’s advice has been sought not only on Justice Department hires: Leonard Leo is one of the Bush administration’s go-to experts on the federal judiciary. When the time arrived for the president to fill two open Supreme Court slots, Leo took a temporary leave from the Society in order to advise the administration. The administration did end up selecting two Federalist Society members for the high court, bringing to four the number of Supreme Court justices (Antonin Scalia, Clarence Thomas, John Roberts, and Samuel Alito) who claim membership in the organization.

Leo was less successful in selling Justice on his pick to replace Carol Lam. This owed, perhaps, to Mary Walker’s controversial past. In addition to being accused of whitewashing an investigation of rampant sexual assault at the Air Force Academy in Colorado Springs, Colorado, Walker also headed the group of Pentagon lawyers that produced a report arguing that the president was not bound by the Geneva Conventions. When Lam stepped down in February, she was replaced by one of her deputies, Karen Hewitt—also a member of the Society.