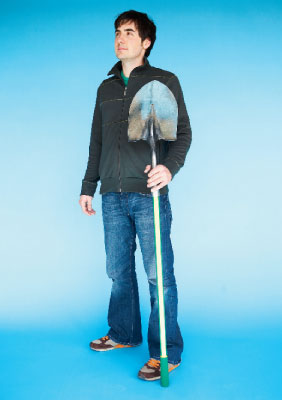 When Digg, the Web 2.0 news-aggregating site founded by Kevin Rose, branched out from tech-only stories, I got hooked. A user-generated Google News, with a side of sass, it offers an editor a unique chance to understand the zeitgeist—or at least a geeky, libertarian-leaning, hipster subset of it. Like many a media outfit, we added Digg and other social bookmarkers to our site and obsess over which stories become popular. The results are often disheartening. Juvenilia can dominate; this is reinforced by DiggNation, weekly videocasts in which Rose and a friend slam beers and discuss what’s “hot.” And mob rule has downsides, as Rose discovered in May after Digg took down items disclosing how to end-run HD-DVD antipiracy codes and Diggers revolted. Forced to choose between a particularly petulant clique of his users and potentially company-killing litigation, Rose chose the former, saying, “If we lose, what the hell, at least we died trying.”

Mother Jones: Congrats, you’re 30 years old, you reportedly own at least a third of a company worth upward of $60 million, and you’ve been named as one of the “hottest guys in the Valley.” How does it feel?

Kevin Rose: The last two and a half years have been pretty nuts.

MJ: To those who’ve never heard of Digg, can you explain what it is?

KR: Digg is like your newspaper, but rather than a handful of editors determining what’s on the front page, the masses do. Which, I’ve got to tell you, takes a lot of getting used to. There was a good six months there when I was freaking out because I didn’t know what type of content the collaborative filter would produce.

MJ: How does the filter work?

KR: Basically, any user who creates an account is an editor of the site. Right now we have a little over 1.2 million registered users who find interesting news and videos and podcasts. And when you find content you like—it could be a New York Times article or a blog entry or a video—you submit its URL to Digg, write a headline, choose the category that it belongs to, and it goes into our “Upcoming Stories” area, where thousands of users sift through it. If you find something there you like, you Digg it. Once enough people have Dugg the article, it goes to the front page, where 2.5 million daily viewers see it.

KR: When I first built the system, if a story had 15 Diggs, it made the front page. But now our algorithms make sure a diverse pool of unique Diggers likes a story before promoting it to the front page.

KR: Well, we have rock stars who are very prescient. But ultimately, it’s whether the story is any good. To make “Top in 24 Hours,” you have to have at least 3,000 people think it’s a good article. Often the most popular stories come from the one-off user who found an interesting article and decided to submit it.

MJ: Okay, but what portion of stories are submitted by the popular set? I’ve seen estimates as high as 50 percent.

KR: We don’t show a Top Digger list anymore, but there are still names that hit the home page on a daily basis. I think it’s awesome because users can add other Diggers as friends and create collaborative filters. I have a list of 40 to 50 friends, and I only know 10 to 15 of them personally, the rest are my filter—people whose judgment I trust. One user I’ve added as a friend, “dfltr,” Diggs the best videos ever, and I roll every time I see them.

KR: He started off without paying people, and got a lot of heat for creating a “Digg clone.” Then he decided to hire employees to submit content. I don’t think that’s a bad model.

MJ: There are reports of companies paying top Diggers to Digg stories favorable to them, or using Digg sweatshops. True?

KR: It’s very easy for us to detect when someone is trying to game the system. You develop a baseline for natural Digging activity and…. But I really don’t want to give away what that is. The funny thing is, if someone is paying a top Digger to submit a story, and users Digg it up and it doesn’t get buried, then I’m not sure it’s a problem, because users wanted it. The community is very good at policing the site. Thousands of users pore over the front page, and if something doesn’t belong, or isn’t good, it will be yanked.

MJ: The HD-DVD piracy code issue aside, have you had bury scandals?

KR: Writers and editors have always been very good at finding information other people want to read. We’re just letting that happen in a single click. It’s not as if Diggers have to write the story themselves; they’re just good at filtering.

MJ: So is the crowd always wise?

MJ: But it does seem like salacious stories become popular very easily.

KR: Headlines sell newspapers. The stories that rise quickly—and users latched on to this very early on—have the best titles and descriptions.

KR: It’s been insane, the growth of users who come to Digg political stories. Have you seen our Digglabs Flash visualizations? We want to apply that to politics, so you can see trends—what stories and sites are hot. You could apply that to any of our genres. But definitely for the election, we want to have a kind of meter of what direction people are swinging.

MJ: Digg’s Elections 2008 section has an inordinate number of stories on perennial Libertarian candidate Ron Paul. Wisdom of the crowd? Or tyranny of the minority?

KR: I steer pretty clear of the political section of Digg. I can only imagine what would happen if I got involved. Every time we launch a new section, a subset of our audience makes it their home page. But it starts to broaden out.

MJ: Now that Digg has video, will it be a chief vehicle for “macaca moments”?

KR: I have no doubt.

MJ: Could Digg be used to spread false rumors about candidates?

KR: The most important thing to us is making sure that the platform operates as it’s supposed to. The content is completely out of our hands.

MJ: So a “Hillary Kills Baby” story could be Dugg up by those who hate Hillary?

KR: If something is truly false and inaccurate, users will flag it.

MJ: Hmmm. Our Iraq War Timeline was completely sourced to original documents, but someone flagged it.

KR: All we say is that users have flagged this as being potentially inaccurate. We don’t say it is absolutely inaccurate. But we’re looking to provide more transparency as to who flags what.

MJ: Sitting here, you’re well-spoken and professional. On DiggNation, not so much. Purposeful persona or too many beers?

MJ: Any worries that there’s tons of video out there of you getting a buzz on, talking about stuff like hot ’80s stars who you’d “spank it” to?

KR: Honestly, sometimes it’s over the top, but fans want to see it. I mean, it’s crazy. We just did a live event in L.A., and 400 people were clapping to us drinking beer.