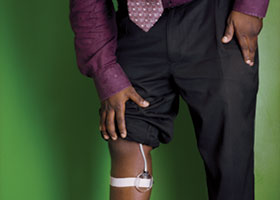 In 2005, Yvonne Williams, an Amtrak waitress who lives in Brooklyn, needed to get her 15-year-old bipolar son Darryl into a residential school—fast. Darryl had been hospitalized, and the Rotenberg Center was the only facility Yvonne could find that would pick him up. To an overworked mom with no car, that was the deciding factor. “It was a last-minute decision,” she recalls, “but it was a decision that had to be made at that moment.”

New York state has been sending troubled kids to Dr. Israel since 1976, but its citizens now comprise nearly 60 percent of the Rotenberg Center’s population. This is partly a matter of supply and demand: New York has a shortage of beds for troubled kids, while Israel has a policy of accepting anybody. It is also a matter of marketing. Israel has long sought referrals from New York’s school districts and psychiatric hospitals; recently, he has begun courting the criminal justice system, sending promotional materials to judges and probation officers, picking up students from New York’s juvenile jails and Rikers Island.

Sales pitches to judges, free door-to-door transportation, a “near-zero” rejection policy—all of this has helped to fuel the Rotenberg Center’s rapid growth in recent years. Then, in June of 2006, a report produced by the New York State Education Department threatened to destroy the program’s carefully cultivated image. A group of investigators, including three psychologists, spent five days at the Rotenberg Center and compiled a 26-page document packed with damning findings.

Israel denounced the investigators as “biased” and compiled a counter-report nearly three times the length of the original. He denied that residents go hungry, and clarified that only 20 percent of them are restrained on their way to and from school. And to the charge that shocks might hurt students’ psychological well-being? “There are no negative side effects of the ged to consider,” he wrote. Israel also hired lobbyists, lawyers, and Manhattan PR agent Ted Faraone (whose former clients include disgraced New York Times reporter Jayson Blair). And while the number of New Yorkers shipped off to the Rotenberg Center slowed after the report’s release, the facility’s total population has remained constant—thanks in part to its increased marketing efforts in Virginia.