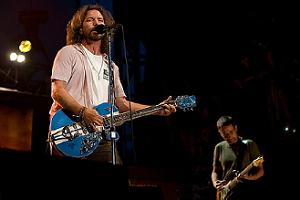 Pearl Jam have released a statement on their website saying that certain political content was cut from the AT&T “Blue Room” live webcast of their performance at Lollapalooza on Sunday night. Fans informed the band of the missing content.

At live shows, lead singer Eddie Vedder often replaces or changes certain phrases in their songs; in this instance, during an extended rendition of “Daughter,” he sang the lines “George Bush, leave this world alone,” and “George Bush, find yourself another home,” to the tune of Pink Floyd’s “Another Brick in the Wall.” Both lines were excised from the webcast.

When contacted, AT&T confirmed the editing, calling it a mistake. A representative told CMJ the cuts were “an unfortunate mistake made by a webcast editor.” Pearl Jam responded by saying, “This, of course, troubles us as artists but also as citizens concerned with the issue of censorship and the increasingly consolidated control of the media.” The band plan to post the uncut performance on their website soon.