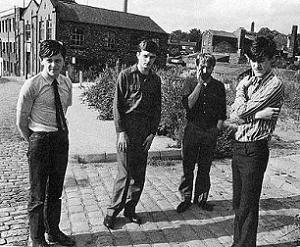 Will it make your new dawn fade? Will it cause you to lose control? I can keep going! No? Alright, fine. Legendary post-punk Manchester four-piece Joy Division had an all-to-brief run, playing their first gig (as Warsaw) in 1977, and releasing only two full-length albums, 1979’s Unknown Pleasures and 1980’s Closer, before lead singer Ian Curtis committed suicide in May, 1980. While the remaining members continued (continue?) as New Order, Joy Division gained far more attention after Curtis’ death, with at least four major collections of their work gaining wide release. But now, the Joy Division publicity machine is about to kick into an even higher gear.

Not one, but two Joy Division-themed films are set for release in the upcoming months. First up, Pitchfork reports that a documentary, helpfully titled Joy Division, will premiere at the Toronto Film Festival next month. Then there’s Control, the Anton Corbijn-directed profile of Curtis, currently playing festivals and set for limited release in the US in October. NME says that the band’s most well-known single, “Love Will Tear Us Apart,” will get a re-release in the UK ahead of Control’s premiere (this whole recycling-singles phenomenon being a distinctly British phenomenon), and that the band’s two studio albums, as well as Still, the live/rarities collection, will get remastered and repackaged for re-release on September 10th.

So here’s the question: how much attention to a defunct band is too much? Nobody loves Joy Division more than me, but even I feel a little strange about “Love Will Tear Us Apart” being tossed in with Mika and Plain White T’s to see where it’ll land in the Top 40. On the other hand, anything that helps introduce the band to a new generation is worth it, right? Give us your comments: has your favorite musician been glorified or diminished by extensive posthumous publicity?