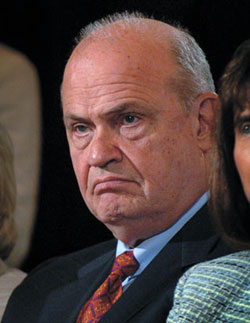 Just before the Republican presidential field squared off for last night’s Fox News debate in New Hampshire, former Tennessee senator Fred Thompson stole the show with a campaign ad that quasi-announced his candidacy for president. The spot, which featured the tall and ruggedly handsome Thompson speaking directly into the camera, ended with the line, “Fred Thompson, Republican for President.”

It wasn’t Thompson’s first declaration of his candidacy (he’s been announcing that he has something to announce for months). Nor was it his last. Later that night, Thompson appeared on the Tonight Show with Jay Leno, where he said, more directly, “I’m running for president of the United States.”

And with that, Thompson was officially in the race, having already secured himself a place as a top tier Republican candidate, a feat that owes in no small part to his coy (and calculated) flirtation with candidacy and the frenzy this hard-to-get strategy generated among the media and the GOP base. According to Pollster.com, which averages polls, Thompson is currently polling second nationally in the GOP primary field, behind Rudy Giuliani. He places third in Iowa and New Hampshire, and is almost tied for first in South Carolina. Having done little of note during his two terms in the Senate, the Law and Order star has managed to steal the spotlight from his competitors. He did so again yesterday.

But a Thompson nomination could lead the GOP down the road to ruin. Popularity with Republican primary voters—the most devout party members, those least likely to abandon the president, the war, or a scandal-plagued party in Congress—is not a reliable indicator of who can win the 2008 general election. And in this election, it’s a particularly faulty one.

Identification with the Republican Party has plummeted in recent months. A Newsweek poll this May showed that only 22 percent of Americans consider themselves Republicans, while 35 percent of Americans consider themselves Democrats. Meanwhile, a third of Americans either identify with the GOP or lean towards it, while over half of Americans do the same with the Democratic Party. In the 2006 midterms, scandals and an unpopular war weighed down Republican candidates. Those conditions—from Senator Larry Craig’s recent bathroom bust to the president’s continued stay-the-course approach to Iraq, even as support for the war falls off—both appear to be continuing.

As a result, the GOP would be smart to nominate someone who appeals not only to its base—diehards, who will vote the Republican column regardless—but who can also reach self-identified Democrats and Independents.

That means that Thompson, with his 100 percent pro-life voting record and classic Republican emphasis on federalism and social conservatism, might be the GOP’s worst nominee. Thompson’s communications director recently told Time, “There is no question that Senator Thompson, among the top tier Republicans, is closest to our base in terms of mainstream conservative values.” Thompson undoubtedly checks all the base’s boxes, certainly better than the socially moderate Rudy Giuliani or the formerly socially moderate Mitt Romney. But if Giuliani wins the nomination, he’ll carry the base anyway and likely chip away some Independents and security-minded (or 9/11-blinded) Democrats. Romney and John McCain have some ability, though less than Giuliani, to do the same. Thompson, the most conventional Republican of the bunch, has no such hopes, Hollywood fame notwithstanding.

There is a legitimate argument to be made that the nomination of Giuliani or Romney would depress turnout among the Republican base, an effect that would probably not occur were Thompson the nominee. But, at the same time, the ranks of the GOP base has dwindled over the past year, and turning every member of it out to vote is less important than grabbing significant blocks of swing voters. Plus, the nomination of Hillary Clinton, who Republicans love to hate, could take care of the GOP’s turnout woes.

Also working against Thompson is the fact that he has no national security credentials (that’s McCain), no icon-making moment (that’s Giuliani), and no significant management experience or Cleaver-esque family (that’s Romney), which, hype aside, leaves you with an undistinguished senator and moderately successful actor who has a reputation for laziness. Republicans should hope their infatuation with Thompson is a movie star crush instead of a long-term affair because he’s their worst chance for the White House.