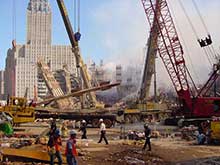 Assessing our vulnerability to terrorist attack remains difficult in part because the events surrounding the attacks of September 11, 2001, have not been thoroughly explained. In its investigation into them, the 9/11 Commission slid past many important questions, leaving them unanswered, and did not adequately challenge the Bush administration when it refused to cooperate or obfuscated its own actions. This has naturally spurred the various conspiracy theories that have set out to unravel what happened. Some address legitimate issues, such as the as-yet-unexplained fact that American intelligence had been tracking lead hijacker Mohammad Atta since the late 1990s but did nothing to stop him. But most theories run the gamut from the preposterous (the planes that crashed into the World Trade Center and Pentagon were drones) to the improbable (the WTC buildings collapsed due to a demolition charge). The prevailing theory is summed up by a bumper sticker: “9/11 Was an Inside Job.”

My own inquires, made while preparing the book Five Unanswered Questions About 9/11, suggest that there was a real government “conspiracy”—but not the one the 9/11 skeptics are peddling. Government agencies, particularly the FBI and CIA, did not inform the public that a terrorist attack might be imminent, and afterward, the FBI engaged in an unconscionable cover-up of its activities and blunders. FBI translator Sibel Edmonds has repeatedly fought to publicize the bureau’s inner workings, only to be blocked by the Justice Department and the courts. Likewise, the 9/11 Commission did not pursue many major lines of inquiry. It failed to take sworn testimony from President Bush or Vice President Cheney on what happened that day. We still do not have satisfying answers on why Secretary of Defense Donald Rumsfeld, second in command to the commander-in-chief, appeared to have been largely absent on 9/11. Why was he out of the loop while Cheney, who had no constitutional authority, ran the show from the White House bunker? And why did the commission not look into why our friends the Pakistanis, who helped create the Taliban, did not tell us what was going on? Or did they? How come John Walker Lindh, the young American convert, was able to walk into the inner councils of Al Qaeda, but CIA agents could not? These are but a few of the legitimate lingering questions that dog the official storyline.

It is clear that the real conspiracy of 9/11 (besides, of course, Al Qaeda’s) was the federal government’s deliberate cover-up of what it knew and never acted upon, as well as its ineptitude. Below, a few of the other major 9/11 conspiracy theories and some information that helps to explain their persistence, as well as their flaws.

The Pentagon Attack
Theory: A missile, not American Airlines Flight 77, hit the Pentagon. The two holes punched in the side of the building were much smaller than the wingspan of a 757. According to a French author, the building was struck by a satellite-guided missile fired as part of an attempted military coup.
Fact: Crash investigators concluded that the main hole in the Pentagon was smaller than the plane’s wingspan because one wing was sheared off and the other was damaged on impact. The second, smaller hole was made by the jet’s landing gear. And if a missile did strike the Pentagon, why was DNA from the passengers of Flight 77 found in the rubble? Finally, Flight 77’s black box was unearthed at the site.

Remote Control
Theory: The two planes that hit the Twin Towers weren’t piloted by hijackers but directed by remote control.
Fact: Boeing said these planes could only be piloted from the flight deck. In addition, the passengers and crew made phone calls describing hijackers taking over. In a call minutes before the crash, American Flight 11 attendant Betty Ong told ground personnel, “Our Number One has been stabbed and our Five has been stabbed. Can anybody get up to the cockpit? Okay. We can’t even get into the cockpit. We don’t know who’s up there.” A second flight attendant on Flight 11 told an American Airlines ground employee, “Listen to me. Listen to me very carefully,” and then went on to describe the hijacking as it unfolded.

The Twin Towers Collapse
Theory: The Twin Towers collapsed because demolition charges were planted inside them, not because of fire and structural damage resulting from American Flight 11 and United Flight 175 plowing into them. The buildings had been designed to withstand great stress and the fires were not hot enough to melt steel. And, if the buildings had collapsed, they would have fallen at an angle—not pancaked straight down, as only buildings destroyed by controlled demolition do.
Fact: Planting enough explosives to blow up the Twin Towers would have required considerable preparation, such as hacking away concrete and steel to position the charges. The work would have taken weeks, possibly months, and could scarcely have gone unnoticed. Additionally, no evidence of explosives has ever turned up at Ground Zero or on debris from the towers. The explosions set off by the crashes ignited fires that did not melt the buildings’ steel structure but significantly weakened it, causing its design to fail. Floors crashing down upon one another with enormous impact took the building down.

Flight 93
Theory: United Flight 93 was shot down over southwestern Pennsylvania by an unidentified white military plane or by a heat-seeking missile fired from an F-16, possibly flown by the North Dakota Air Guard.
Fact: On 9/11, a white Dassault Falcon business jet, owned by VF Corp of Greensboro, North Carolina, was preparing to land at an airport 20 miles north of Shanksville, Pennsylvania, where Flight 93 crashed. According to Popular Mechanics, which did a thorough investigation into Flight 93 and other conspiracy theories, the Cleveland control center contacted the VF plane’s cockpit and asked the pilot to divert and see if he could find the crash site. The Dassault descended to 1,500 feet and eventually spotted the smoking hole in the ground where Flight 93 had crashed. As for the missile, according to an Air National Guard spokesman, Lt. Colonel Rick Gibney flew an F16 that morning from Fargo, North Dakota, to Bozeman, Montana, where he picked up Ed Jacoby Jr., head of New York state’s Emergency Management Office; he then took him to Albany, New York. Jacoby told Popular Mechanics that Gibney couldn’t possibly have shot down Flight 93 because he was with the fighter pilot at the time the plane went down and they never were anywhere near Shanksville. Additionally, the military did not know about the crash of Flight 93 until four minutes after it occurred.

Where Were the Fighters?
Theory: None of the fighters from the 28 air bases within range of the hijacked airplanes were scrambled because the Air Force was ordered to stand down.
Fact: The Federal Aviation Administration’s Boston Center phoned the Northeast Air Defense Sector at 8:37 a.m. to say Flight 11 had been hijacked. Within minutes, NEADS scrambled two sets of fighters—two F-15s from Otis Air National Guard Base at Falmouth, Massachusetts, and three F-16s from a National Guard base at Hampton, Virginia. The Virginia planes headed out over the ocean. The F-15s didn’t have time to reach Flight 11 before it crashed. Also, the hijackers had turned off the planes’ transponders, forcing air traffic controllers to look through thousands of radar blips to find the planes. North American Aerospace Defense Command, which is supposed to guard American airspace from attack, had its radar focused out of the country, searching for incoming rather than internal attacks.

Hijackers and the FBI
Theory: In 2000, future hijackers Khalid Al Mihdhar and Nawaf Al Hazmi were followed by the CIA to an Al Qaeda meeting in Kuala Lumpur, Malaysia. Then the agency lost them. Afterward, both men legally entered the United States through Los Angeles and went to live in plain sight in San Diego. How could this have happened without the government’s knowledge? The 9/11 Commission buried this detail in its footnotes and the FBI successfully resisted subpoenas from the Senate Select Committee on Intelligence to produce an informant who had known the two men in San Diego. Congress never was able to question this informant. The 9/11 Commission did talk to him, but what transpired at this meeting is classified, along with other footnotes in the commission’s report. Therefore, the hijackers must have been here with government approval.
Fact: The Intelligence Committee’s staff was the first to unearth and report the FBI informant’s relationship with the two hijackers. Former Florida Senator Bob Graham has described the committee’s unsuccessful efforts to persuade the FBI to bring the informant to testify before Congress. The true relationship of the hijackers and the FBI informant remains hidden in the bureau’s files.

Insider Trading
Theory: Insider trading in American Airlines and United Airlines stock just prior to 9/11 suggests that the traders had foreknowledge of the plot.
Fact: This appears to have been a coincidence, not a conspiracy. After investigating the theory, the 9/11 Commission concluded that “much of the seemingly suspicious trading in American [Airlines stock] on September 10 was traced to a specific U.S.-based options trading newsletter, faxed to its subscribers on Sunday, September 9, which recommended these trades.”

Able Danger
Theory: Mohammad Atta had been under surveillance by German and American intelligence back in the late 1990s. A secret Pentagon project called Able Danger knew all about Atta and his trips back and forth from Germany to the United States. Able Danger participants wanted to tell the FBI what was going on but were prevented from doing so by Pentagon brass, who feared that news of the secret project would cause a political uproar. The military is prohibited by law from spying inside the country.
Fact: Atta’s purported trips to the United States now seem unlikely. Nobody really knows what Able Danger was up to, since project officials were prevented by the Pentagon from testifying before Congress.