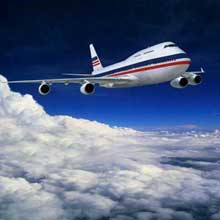 In July 2004, the 9/11 Commission made a clear and simple recommendation regarding air travel: tighten passenger screening at airports and security on planes. Yet thanks to a perfect storm of government incompetence, lack of public funding, and the actions of powerful airline industry lobbyists reluctant to spend dollars and further delay passengers, little of significance has changed since the collapse of the World Trade Center.

Television news stations love to film reporters passing security checkpoints with potential weapons and hastily-manufactured fake IDs. And in fact, the government itself has staged similar experiments. In late 2004 and early 2005, teams of undercover federal investigators acting for the Government Accountability Office set out to smuggle onto commercial jetliners component parts that, once aboard, could be assembled to make a bomb. These mock terrorists marched unimpeded past screeners equipped with X-ray machines and wands at 21 airports. When confronted with these embarrassing results, the Department of Homeland Security dismissed the exercise as merely “hypothetical.” A spokesperson explained, “While random items commonly found under a kitchen sink could conceivably be concocted into an IED…we find it highly implausible.”

It gets worse. In February of this year, the Transportation Security Administration’s own undercover agents were cleared by screeners at Denver International Airport with simulated liquid explosives packed in their luggage and IEDs (improvised explosive devices) strapped to their bodies. A metal detector sounded but TSA employees failed to check the agents’ baggage or pat them down. MSNBC quoted one source who said that “an agent taped an IED to her leg and told the screener it was a bandage from surgery. Even though alarms sounded on the walk-through metal detector, the agent was able to bluff her way past the screener.”

Human error certainly isn’t the only problem. The government spent $160,000 each for machines called “puffers,” which have been installed at 37 airports. With a high-tech appearance that is impressive indeed, these doodads are supposed to detect explosives, much as bomb-sniffing dogs do. But in yet another Denver test, this one conducted by CBS, a network employee sprayed with explosives walked through the airport’s three puffers with no trouble whatsoever. This is in contrast to dogs, which have a proven record of reliability when it comes to detection, and also look quite imposing when trotting along airport corridors.

Earl Morris, then TSA‘s deputy assistant administrator for security operations, is perhaps not as flummoxed as he should be by such results. “We understand that security is not perfect in every aspect,” he said after the TSA undercover operation, “but we…go about trying to be perfect every single day and we are doing a tremendous job out there and the public should feel comfortable flying out today and quite frankly, they do.”

It’s no wonder then, given this self-congratulatory attitude, that the feds, rather than beefing up security measures, are in some ways working to strip them down. Take our aging traffic control system, which monitors and manages U.S. airspace. Currently, the system is run by the Federal Aviation Administration’s Marion Blakey, a tough-minded businessperson who is no friend to labor unions. In 2006, when the FAA‘s biggest union, the National Air Traffic Controllers Association, sought an 18 percent pay hike over 5 years, Blakey imposed a 9.4 percent pay increase instead, along with cuts to starting controller salaries and some incentives.

The end goal, it appears, is to privatize air traffic control. As it stands, the system is financed by fees charged to ticket holders. If Blakey has her way, it will instead be paid for by the airlines themselves through users’ fees, much as with the Food and Drug Administration, which is paid by pharmaceutical manufacturers to test their products. This type of arrangement gives corporations too much say in systems meant to regulate their activities, and is the cause, according to critics, for lax regulation of the pharmaceutical industry during the Bush administration. In the case of the airlines, a users’ fee system would no doubt lead to additional cost-cutting measures, such as heavier controller workloads and cheaper equipment. Given the industry’s efforts over the years to fight improved safety measures-such as balking at hardening cockpit doors prior to 9/11—the future does not look bright.

One final point on air security or the lack thereof: It concerns the country’s nuclear power plants. Nationwide, 34 boiling water reactors store spent fuel above ground. The fuel is exposed. Environmentalists, including those at the Union of Concerned Scientists, have long argued that these wastewater pools should be guarded, or that it would make more sense to store waste in hardened casks far away from the plants themselves. They fear an attack could spread radiation over large expanses of countryside. But the Nuclear Regulatory Commission, which oversees the industry, refuses to take this protective step. In declining to heed its own staff’s warnings, the agency leaves thousands, if not millions, of people vulnerable should terrorists decide to strike.